ALTER BRIDGE ANNOUNCE UK ARENA TOUR
Following their awe-inspiring slot at the Download Festival this past weekend, ALTER BRIDGE are delighted to announce they will return to the UK this Winter for their first arena tour here.
Since ALTER BRIDGE formed in 2004, the band have built a diehard fanbase through relentless touring and stellar live performances, selling more than a million albums and in the process becoming one of the most respected rock bands in the world. Their third studio album, AB III, released last October and rocketing up to #9 in the UK album chart, was phenomenally received by critics and fans alike, blasting away any preconceptions and firmly lodging itself in many ‘Top 10 “end of year” lists.
Special guests on the trek will be none other than their Southern rockin’ labelmates BLACK STONE CHERRY, who just two weeks ago released their brand new album ‘Between The Devil And the Deep Blue Sea’, crashing into the UK national album chart at an impressive #13.
An additional opening band is yet to be announced. Tickets are £24.50 regionally and £26 for London and will go on general sale from 9am on Friday 17th June from www.livenation.co.uk
.
Get your rocks off at:
Tue 22nd Nov - BIRMINGHAM LG Arena
Wed 23rd Nov - ​CARDIFF Motor Point Arena
Thu 24th Nov - ​MANCHESTER Evening News Arena
Sat 26th Nov - ​NEWCASTLE Metro Radio Arena
Sun 27th Nov – GLASGOW SECC
Tue 29th Nov - ​LONDON Wembley Arena
Posted by aorwxm at 20:15 No comments:

If Only - No Bed Of Roses 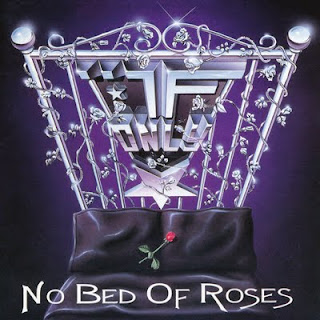 Never has a band or album been so aptly named!


If ever a band had such bad luck and misfortune and tragedy. If they fell in a bucket of tits, they’d come out suckin’ their thumbs!
It all started back in 1988 in London, If Only was to be centred around the amazing vocal talents of Lorraine Bennington, and after a few false starts and a rotating cast of members things finally settled down with the line-up that was set to record the “No Bed of Roses” album. Founding member and songwriter Greg Hart recruited his band mates from his previous group Moritz, including Ian Edwards on bass, Andy Stewart on keyboards and Andy Elphick on drums. Alongside them they added hot shot guitarist Martin Chaisson (UFO, Waysted). Unfortunately personal events led to the departure of Bennington after just one show, but luckily for the band a friend recommended ex-Girlschool vocalist Jackie Bodimead as a replacement. The latter tracks (13-16) are her recordings with If Only
The band got a break when a “chance hearing” of their working demo’s fell on the ears of Asia/Yes keyboardist Geoff Downes, who insisted on meeting the band. He was stunned by the quality of songs and performance, thinking it was a “big shot” USA band looking for a UK release. Geoff refused to believe IF ONLY were an English group, “No UK band can play AOR that good, they must be from America!”
With Geoff at the helm, the band completed the album, and even had the privilege of recording the album closer “Man Against The World” (a tribute to the immortal Freddie Mercury) with Mike Moran (Queen, Gotthard). Mike helped the band to finish the record by adding every Queen trick in the book
Cue 1991, and with grunge looming ever closer, the band were seemingly in trouble, in debt, and in emotional pieces. But once more help was at hand when the band was told about this amazing female singer from London ready to set the world alight, Tina Egan. She was invited to join the band and be given the arduous task of re-recording the entire vocals on the album. Tina roared her way into the studio and with a voice of blood and thunder, she set about stamping her mark on the tracks. To spice things up, Tina brought in a few of her own tracks for the album, one in particular was the excellent  “Long Way From Home”. Basically to keep it short...Blah...blah...3 singers...2 yrs to make....Blah....band died on its arse...blah...equals all this bad luck I said at the top of the review. 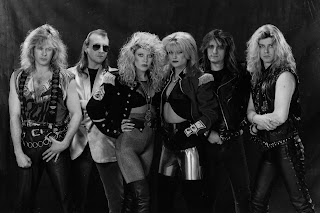 Now, years later, Avenue of Allies have done the melodic rock work a favour by releasing this long lost gem. What we have is a classic slice of 80s melodic rock which would have put the willies up many a US counterpart. Its actually better than other girly bands output from the 80s – bands like Vixen, Witness etc. Trouble is, it was recorded in the early 90’s with Grunge taking a hold. The delays meant it was destined for failure unfortunately. It has all the songwriting hallmarks of the Moritz album, but for me, it has a better singer in Tina Egan. She is a cross between Pat Benatar, Suze DeMarchi and Lorraine Lewis, and has a cracking rasp to her voice that few can manage (except these three of course!).
Opener ‘Loaded Gun’ is one of THE finest melodic rock tracks you’ll witness in many a year, and if it was penned and performed by New Jersey era Bon Jovi you wouldn’t be in the least surprised – plus IF ONLY would have made a shitload of money if that was the case. Great vocals, catchy chorus, huge riffs, it has all the hallmarks of what a great song should be.
Other notable highlights include ‘Tumblin’ Dice’, an acoustic/electric belter.  ‘If Love Could Last Forever’, which Egan comes over a little Stevie Nicks, before the chorus kicks in with, and I can only assume it’s Bonimead’s BV’s sounding exactly like a certain Cher. Title track ‘No Bed of Roses’ is a song that Cher wished she’d have performed, and conjures up the style of songs that Michael Bolton would have penned before he went all soft on us and became a multi millionaire. TWAT! But that’s a different rant.
The song that Egan brought to the table was ‘ Long Way From Home’ which opens with a Bad Company riff (almost identical, scrub that IT IS IDENTICAL, opening to Feel Like Makin love) which picks the pace up after a couple of minutes into this belting mid section. One of the best songs on the album methinks, before the dramatic piano led last track ‘Man Against The World’.
The bonus tracks predominantly belong to Bonimead’s tenure. To be honest, with Bonimead or Egan fronting the band, success should have come by the truck load. Bonimead has this vibrato to her voice (like Cher) and her vocals fit they style of If Only just as well as Egan’s and they round off the album very nicely indeed. It’s a shame she bailed really.
Long after its original release the bad luck still dogged the band, when their jewel in the crown, Tina Egan passed away in 1999. Tina, God bless ya, wherever you are. Your time with us was limited, but you crammed more quality into one album than many can in a lifetime.
One hope is a reformation. A ‘Moritz/If Only’ double header tour would be abso-fuckin-lutely brilliant. I’m allowed to dream aren’t I?
So, ‘’If Only’’ indeed! Never has a band been so aptly and unfortunately named. But with AOR staging a bit of a resurgence, this album deserves to be grabbed by the lot of us and given the credit it deserves. If you love female fronted rock bands (Romeos Daughter/ Femme Fatale/ Saraya/ Baby Animals etc) then you’ll come in your pants listening to IF ONLY’s long lost classic. They shoulda been huge....
90/100