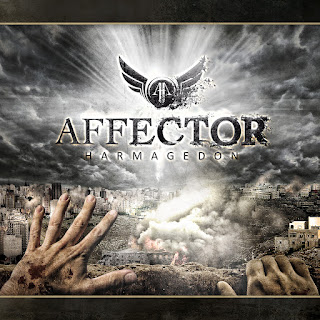 
After 4 years of intensive writing and recording, newcoming prog metallers  Affector are finally set to release the concept album “Harmagedon’’. The seed for this debut album was planted in 2006 with the initial meeting of Dutch drummer Collin Leijenaar and German guitarist Daniel Fries. As the touring drummer for Neal Morse (Transatlantic, Flying Colors, ex Spock’s Beard), Leijenaar sometimes encountered fans on the road seeking his feedback on their own music. It was a routine that not always brought something interesting to the table, but as fate would have it, Fries had something inspirational to offer. His music was strong enough to forge a friendship with Leijenaar and the pair kept in contact, trading ideas along the way that have only now come to fruition in 2012 in the form of “Harmagedon”.

Songwriting began earnestly in 2008,with Leijenaar and Fries creating demos based on separate and collaborative musical ideas, including some dating as far back as 2005 and earlier. Connections to vocalist Ted Leonard (Enchant, Spock’s Beard, Thought Chamber) and bassist Mike LePond (Symphony X) brought both men on board, and the unit was confident enough in what they’d created to put together a wish list of guest keyboardists for their debut album that included Neal Morse, Alex Argento, Derek Sherinian (Black Country Communion, Planet X, ex-Dream Theater) and Jordan Rudess (Dream Theater). They succeeded in securing all four!

Ultimately, if the music isn’t enough to rope the listener in, the album concept is sure to finish the job. As “Harmagedon” will be released in 2012, the band chose to focus on the predictions (via the Mayan calendar and the writings of Nostradamus) that the world is doomed to end in 2012 and thought it would be interesting to do something with that 'end of the world' theme. So Fries and Leijenaar took parts of one of the oldest books in history (the Bible) to tell the story of the end times using only biblical verses. There is no rhyme or cadence for the vocals, the lyrics haven’t been embellished with a personal touch, and the music was written around the verses. It is, in the truest sense, experimental art.

The album begins, for example, with an instrumental introductory piece (‘Overture pt. 1&2’) – complete with a flesh-and-blood orchestra (Poland’s Sinfonietta Consonus) – to introduce all the musical themes featured in a manner similar to an opera or musical.

Coming onto ‘Salvation’, reveals the true sound of Affector. I know Ted can sing with the best of them, if you’re a fan of Enchant and miss them dearly, it’s great to hear Leonard back and on tip top vocal form. The key of Affector’s brilliance is the guitar work of Daniel Fries, blindingly technical and ranging across various progressive metal styles, and keeping it just pain and uncomplicated when needed also. The guy is a ‘Revelation’ (Sorry!). ‘The Rapture’ is one of the highlight (to be totally honest I can’t hear anything I can find fault with), interspersing melodic solos and the Sinfonietta Consonus orchestra with some of the heaviest metal riffs on the album so far! It’s the best part of 14 mins of pure symphonic prog heaven. (again, sorry!) 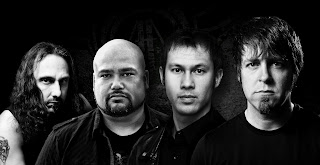 Considering they got all of their keyboardists to play along, it is the four outsiders that truly make the album a worthwhile experience. All add value and substance in the ways that only Morse, Sherinian, Rudess and Argento truly can. The whole album is as overblown as (Jordans boobs!) one would expect, but there are some great riffs and plenty of catchy hooks to be had here, even if the lyrics are straight from the ‘Dragon Tattoo’ of its day; the one, the only…The Bible!

Comparisons will rightly be drawn to the likes of Dream Theater and Symphony X, and fans of both will lap this music up immediately. Affector deserved to be talked in the same sentences as DT as this music is actually on a par with DTs best stuff. I don’t say that lightly.

A ‘Super Group’ is a name given out way too often in these modern times. Whilst Affector guys are exactly household names, their commitment to their craft, and the subsequent symphonic progressive tour de force that they have bestowed upon us will make these four guys a lot more well known across the prog world in the months to come. Let's hope that the Mayan Calendar doesn’t piss up their plans for a follow album in 2013!!!

If you’re not content with being just happy with your music choices, opt for this. It will truly give you a religious experience with story telling and musical excellence bar none. I’m that confident that this will be in a Top 5 of fans prog/rock albums at the end of the year, I’m almost tempted to offer a money back guarantee on behalf of Inside Out myself. It’s that good an album. Play at XI (!)