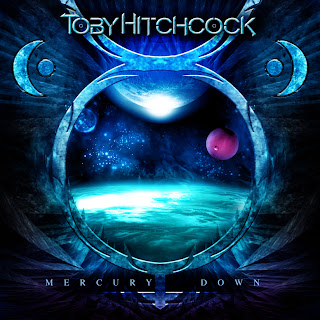 Powerhouse American vocalist Toby Hitchcock came to the attention of Melodic Rock fans when former Survivor founding member Jim Peterik chose him as the lead singer for the band that would mark his return on the scene: Pride of Lions.

With Pride of Lions, Toby had the chance to sing on three studio albums which are considered as true classic among the fans. Often compared to Bobby Kimball (Toto), Jimi Jamison (Survivor) or Lou Gramm (Foreigner), Hitchcock’s voice has the depth, the feeling and the extension of each of them, still keeping his own identity and trademark.

While Pride of Lions took a small hiatus Toby took the chance to hook up with the Swedish songwriter and producer Erik Martensson (Eclipse), whose name came to prominence when he wrote and produced the very popular W.E.T. album which saw the return of singer Jeff Scott Soto to Melodic Rock. Erik by the way plays ALL instruments on Mercury’s Down. What a talented bastard that bloke is!
Considering the luminaries that Hitchcock is compared to, the opening track ‘Strong Enough’ is so close to being a Journey song, I half expect Perry or Pineda to come kicking in with the vocals. If I were him, I’d sell the song onto them for the next Journey album; it’s that good a tribute – big opening riff, sumptuous vocals and a huge, HUGE chorus that is destined to say in your head for weeks. Similar to Work of Art, Mercury Down seems to tick all of the AOR boxes, ‘This Is The Moment’ again coupling huge melodic riffs with an even bigger melody. ‘How To Stop’, again a decent track is overshadowed by the first two it almost seems like it’s a filler. On separate subsequent listens it’s a solid track indeed. ‘Let Go’ is another soaring AOR track. If this were the mid 80’s, Mercury’s Down would be selling by the sack load and reminds me of the good old days of bands like Tradia in particular. ‘One Day I’ll Stop Loving You’ is a ballad in the old school format and shows how good Hitchcock voice really is. It’s a bit AOR Ballad-by-numbers but is good all the same.
‘I Should Have Said’ again falls into the heavy riff/big vocal chorus category. ‘Summer Night in Cabo’ has Peterik/Survivor written all over it, it’s the kind of song I expect to hear popping up on a US TV drama. ‘Tear Down The Barricades’ again borders on the power metal side of melodic rock.
Both Hitchcock and Martensson have delivered in droves. Mercury’s Down definitely pitches itself into the heavier side of AOR, and that is a great thing, as he is not drifting into the slushier side of AOR that many bands feel that they have to ‘pop into’. Hitchcock and Martens son are a match made in AOR Heaven (I know it’s trademarked). Hitchcock’s excellent vocal range, combined with the excellent guitar work of Martennson really has hit gold, or should it be Mercury with this big debut album. I await a follow up with baited breath
TOBY HITCHCOCK “Mercury’s Down”

Produced and written by Erik Martensson
Label - Frontiers
Tracklisting: Strong Enough;This Is The Moment; How To Stop; Let Go; One Day I’ll Stop Loving You; I Should Have Said; If It's To Be (It's Up To Me); Just Say Goodbye; Summer Nights In Cabo; Tear Down The Barricades; A Different Drum; Mercury's Down.