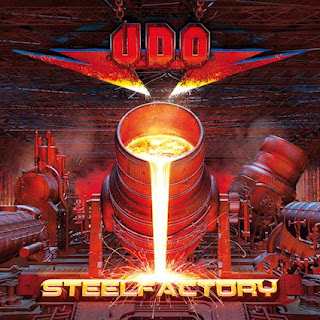 After more than 40 years in the business and with a renowned breakthrough in the early 80’s with ACCEPT behind him, as well as several million records sold worldwide, Udo Dirkschneider from Solingen/Wuppertal, Germany, is one of the biggest rock legends in the business. U.D.O. has enjoyed well over two decades in the spotlight. Regardless of changes in the metal scene or the U.D.O line-up, the band has never deviated from Dirkschneider’s vision of serving up traditional balls-to-the-wall, no-nonsense heavy metal.

The German metal gods U.D.O. roll over us with a heavyweight made of steel and metal better than ever! With 'Steelfactory', U.D.O return to their core competence, clearly influenced by their past shows with DIRKSCHNEIDER, the songs in their rousingly simple straightness have a hymn character, as it is only known from the past. 'Steelfactory' has become a timeless metal album and thus the impressive statement of a master of his craft.

With its earthy, punchy and handmade sound - with the participation of the Danish producer Jacob Hansen (among others Volbeat) - 'Steelfactory' meets the nerve of the time, which may be triggered again since the successful DIRKSCHNEIDER tour worldwide.

New album 'SteelFactory' will be released on 31st August.

And my suggestion is go out and buy it. From the moment ‘Tongue Reaper’ hits you, and through Iron Maiden’s Wasted Years sounding ‘Make The Move’ you’re hooked.
The german influences are plain to see and hear, together with some Greek Mandolin thrown in on ‘Keeper Of My Soul’. It’s very 80’s rock, but, being my age, I think that’s what makes it more enjoyable.

Udo Dirkschneider’s prominent voice in ‘In The Heat of The Night’ takes me back to Accept’s great era.  There’s some great crowd pleasers here, including 'Raise The Games’ superb verse riff and Egyptian tinkling. ‘Blood On Fire’ kicks heavy although the chorus lets the song down slightly, Some great duel guitar work in this also, together with a clever tongue in cheek solo!

As we claw our way through the album it’s apparent how solid this effort is. A very good heavy metal album that will please all of Udo’s followers and Accept’s I’m sure. Definitely an 8 from me. 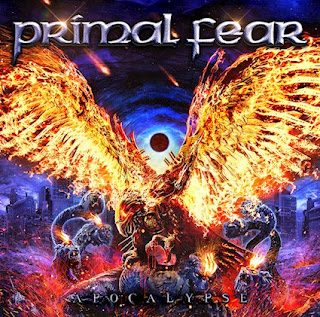 The European power metal combo Primal Fear has been kicking around the metal underground for years, refining their brand of melodic riffing and soaring vocals. Their sound, highly influenced by Gamma Ray  (who has traded members with this band) and Judas Priest , was introduced on their 1998 eponymous debut. The following year found them gathering a press following when Jaws of Death  garnered positive reviews from most respectable metal critics. On top of that, their European popularity flourished as power metal enjoyed moderate success in the overseas mainstream.
Nuclear Fire followed in 2001, leading to their first U.S. appearances in the guise of several large metal festivals throughout the year. They returned to the studio in early 2002, recording and releasing Black Sun by the end of spring. 2004's Devil's Ground and 2005's Seven Seals  saw the band expanding their fan base via a run of heavy touring, including a European and Japanese tour with Helloween, and 2007's New Religion featured a guest vocal from Epica's Simone Simons, as well as ambitious orchestral arrangements from Matz Ulmer and Mat Sinner. 2009 saw the release of the band's eighth studio long player, 16.6 (Before the Devil Knows You're Dead), followed in 2012 by a string of well-received LPs that included Unbreakable (2011), Delivering the Black (2014), and Rulebreaker (2016). In 2017, they issued the live album Angels of Mercy as well as the single "If Looks Could Kill."

Although they’ve been going for over 20 years now 'Apocalypse' is the only Primal Fear material that I have knowingly heard. I have listened to 'Apocalypse' several times now and it is a good album. However, it did not impress me enough to make me want to go out and buy their extensive back catalogue. There isn’t actually anything wrong with the album but sadly there wasn’t a single track on the album that made me sit up and think 'holy sh*t that’s a great song'. What I did notice is that the composition of 'Apocalypse' is extremely well done and it flows beautifully; the atmospheric opener reaches a crescendo that sets the tone for the rest of the album.
Although I couldn’t pick a track that really stood out, what I did hear was a very polished melodic metal album that will have any self respecting rock fan shredding their air guitar and double kicking their phantom drum kit to the blistering paced 'New Rise' and 'The Ritual'.  'King Of Madness' does slow things down a touch then the breakneck speed resumes with 'Blood Sweat And Fear'. For the next five tracks the foot comes off the accelerator slightly, almost coming to a halt when 'Eye Of The Storm' fades out.  However, there was one shot of nitrous left in the tank and when it was hit 'Cannonball' came flying out of the blocks to bringing the album to a high speed conclusion.
For me Apocalypse is a solid 8/10 album.