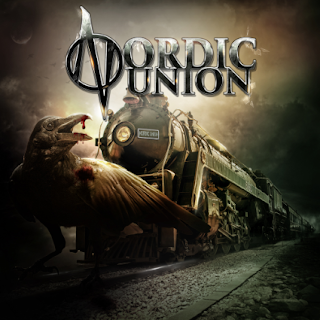 That great sage Myles Kennedy one sang, “The sun always sets, the moon always falls”, as does Serafino Perugino’s desire for a nice little earner of a ‘project’. This tine, for the first time in 2016, it’s a joint venture, or in this case a Union (make that a Nordic Union) between W.E.T.'s/Eclipse/Ammunition's Erik Martensson, and Pretty Maids’ Ronny Atkins.

Martensson in comparison is a bit of a slapper - a man of many bands, and now projects, but a man of immense talent. That said, the bloke is constantly on fire and improving with every release he has done to date.

After just one listen I felt like a kid at Disney theme park. I had to do back and do it all again. The production is huge and Martensson has a style to his writing that screams ‘quality’. You can tell as the sound of NU is a blend of Eclipse and WET. Think W.E.clipse and you’ll see where I’m coming from!

‘The War Has Begun’ takes its lead from Eclipse's 'Bleed and Scream' and is a power anthem for the modern age, a battle cry for the disenfranchised and underdogs of the world, and Magnus Henriksson adds his considerable talents to a cracking guitar solo. I have a confession, and that is that I’ve never been a Pretty Maids fan really, but that could change as Atkins sings his Nordic arse off. ‘Hypocrisy’ is a prime example of this. Mash it with the killer opening riff and a chorus that is injected straight into your brain for immediate repeat.

It could be an obvious choice to point the finger at Martensson and suggest that these songs are Eclipse cast offs. But that, dear reader, couldn’t be farther from the truth. The frenetic pace is knocked back with ‘Every Heartbeat’ a song that highlights Atkins’ vocals. Actually both this and ‘True Love Awaits You’ both err on the side of power pop/rock and could see NU appealing to a wider audience than the typical Frontiers roster. ‘When Death Is Calling’ shows the heavier side (and much better side) of Nordic Union. When Atkins sings the title line, its like the modern version of Blackie Lawless.

Its proven to be a great choice for Frontiers in putting Martensson and Atkins together. In Martensson you have a great songwriter, producer (and singer in his own right) and in Atkins a perfect foil to deliver the melody and lyrics.

2015 was a hit and miss year for Frontiers, with some quite average releases but they (Frontiers) have hit 2016 with a huge bang. Let the high consistency continue!!

Its quite an essential purchase for melodic rock fans 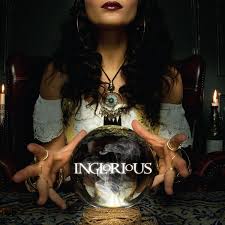 There’s a new kid strutting around on the block. You know, the one who always had the latest trainers, newest toys, wanted to steal your girlfriend, aka ‘a cocky little fucker’. We all know one, right? Well, this new kid, is Inglorious. These young guns have been around for almost 2 yrs now (formed in Feb 2014). Fronted by the very hairy Nathan James (he has leant his considerable pipes to Trans Siberian Orchestra and Uli Jon Roth – just don’t mention The Voice!). He was on the look out for like-minded musicians that desired to make cracking rock music in a very honest fashion. He also wanted an ‘organic’ sound. You know, like in the good old days when albums were recorded ‘live’ and in studios as a group, and not just an mp3 file on an email being sent to opposite ends of the World. Because of this, the debut album is all about the feel, vibe, sound, energy and performance that a band can give you, with no auto-tune! Like all good rock bands in the 21st Century, Inglorious have a Swede on board in Andreas Eriksson and is tuned in to the ‘classic rock’ vibe being targeted here.

What I can definitely say, is that there’s a ‘Deep-Snake-Bow’ feeling to proceedings. If you grew up on the rock classics (Purple, Rainbow, Whitesnake), then you’ll get a lot out of this album. Opener ‘Until I Die’ makes straight for the Deep Purple tribute and the opening salvo is a different take on Highway Star – Hammond on full tilt, building to Couple this with some lung-busting vocals, expecting Gillan to burst in, only it’s a big dirty riff. James really goes for it and makes a huge difference to what could be just another rock band going thru the numbers. The voice is huge and he obviously doesn’t do things by halves!!!
‘Breakaway’ comes at you like a freight train whilst being tied to the tracks., a relentless song! It’s also a very Whitesnake (old and new) song, with nods to the classic Moody/Marsden and Aldrich/Beach styles. ‘High Flying Gypsy’ starts off a little drab, but has picked up pace by the bridge and chorus. So far so good! 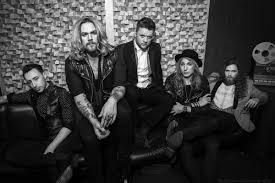 Holy Water takes its lead from a 70s classic rock sound – it particularly has the ingredients of Coverdale, Rodgers with a vibe that would fit comfortably with some of the aforementioned gents best works. ‘Warning’ explodes with James’ vocals (this bloke can rip 10 coats of paint from timber at 50 paces), especially the end bit. The overall interplay especially with Eriksson and Taylor gives Inglorious a huge, fat sound.

‘Bleed For You’ is a tad more sedate (only just!). When you think that some gentle vocals are on the horizon, James comes galloping over the horizon with a lungful of noise. ‘Girl Got a Gun’ starts off all moody then has this very melodic and catchy chorus. The title track ‘Inglorious’ is a little belter. Its eastern in sound with a riff to suit, and is easily their ‘Valley Of The Kings’ or ‘Gates Of Babylon.’ The ONLY real time that the whole noise is toned down is for the (sedate in comparison) ‘Wake’. So much so, you would think it’s a different singer. And whilst on that subject……

……my only gripe, and it is such a small one that I shouldn’t really mention it, is that James wants to sing at Max Power for every song. As someone once said, ‘if you’ve got it, flaunt it’, and James certainly has it to flaunt. Not every note has to have a load of welly behind it and I’d like to hear more variety. Small gripe, but that doesn’t stop the enjoyment to be had here.

That said, Inglorious’ debut is one to behold in 2016. It’s a welcome departure from a lot of mediocrity, and to see Frontiers steer away from the usual melodic rock brigade

One of the definitions of Inglorious is ‘not famous or renowned’. Well give it a month or two and certainly amongst the rock community, they will certainly be ‘famous’. Well done fellas!