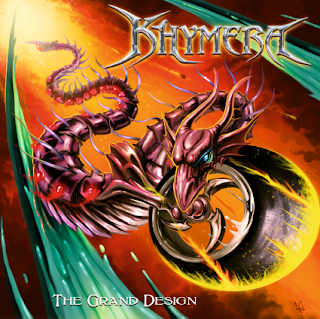 While the Khymera project started out as an alliance between Italian producer/musician, Daniele Liverani and then Kansas singer Steve Walsh, it actually developed into a regular musical project when Pink Cream 69/Unisonic bassist and producer Dennis Ward came into the picture.

While known as a bassist, Dennis always sings background vocals with his bands, so it was quite interesting for many fans to hear his voice taking the lead on the Khymera albums “A New Promise” and “The Greatest Wonder”. While the project went on hiatus for some time, it was a natural choice for Dennis to grab the reins and take complete control (both on the songwriting and on the production side) of the new album, “The Grand Design”, which comes 7 years after the release of “The Greatest Wonder”.

Musically, the new album very much follows along the logical progression of the musical path that was started a few years ago. Basically if you are a fan of the previous two Khymera/Ward fronted offerings, then the third installment will be no big surprise in what you are expecting, and it showcases the fantastic vocal abilities of Dennis Ward and highlights his great skills as a songwriter and producer.

The keys running through the opener ‘Never Give Up On You’ sees Khymera trying to out-Journey Journey! Think on the lines of ‘Be Good To Yourself’ and you’re not far off the mark with this tune. ‘In ‘Tell Me Something’ its Khymera’s ‘classic Bon Jovi’ era sound being achieved and Ward’s vocals are crisp and clean – no need for a lyric sheet here folks! ‘Say What You Want’ is a song I could imagine being played on the TV show Nashville, think of it as US country rock meets Daughtry.

Ragno obviously takes his lead from the likes of Cain and Rolie as ‘A Night To Remember’ certainly has more than a passing nod to Journey. It’s by no way a criticism, its hard earned praise. For ‘The Land Of Golden Dreams’ Ward sounds a cross between Gary Hughes and Sambora and makes it one of the best songs on the album.

For a band that practices what it preaches, then a ballad or two wouldn’t be amiss. The boxes are well and truly ticked on the heartwarming ‘Streetlights’ and ‘Where Is The Love’. It’s the former that manages to drag you in and tear you apart as it builds up to a ‘lighter-waving’ crescendo.

Khymera still offers one of the most shining examples of what great European Melodic Rock is all about: crystal clear production, soaring vocals, killer musicianship and songwriting that reminds fans of the heydays of the genre when bands like Giuffria, Icon, and Signal ruled the airwaves.  Khymera is a worthy addition to be mentioned in the same breath as the aforementioned bands.

If it was 1988 and Khymera were American then they would be absolutely massive. The US tends to stick to what it knows (lots of airplay for the classics such as Foreigner / Journey / Styx etc), if you’re reading this across the pond then you could expand your horizon and listen to a band that knows how to perform AOR at its purest form.

Whilst there’s been a lot of average stuff peddled in 2015, ‘The Grand Design’ proves to be one of the better ones, and it is certainly an album that deserves many repeated listens, as few bands play melodic rock at this quality. There is enough present here to keep the AOR masses very happy indeed. Decent songs, great production, and Ward shows again why we should hear a lot more of him than we currently do. This is exactly they type of band that HRH AOR/Rockingham etc need to get their mitts on.

Bugger Me! BRS have only gone and probably come up with the best melodic rock album of 2015! More to follow, but first a little intro…..

A long time ago, probably in a pub far, far away, (the North West?), Blood Red Saints was formed around this time last year by Pete Godfrey and Rob Naylor. Pete’s In Faith album took a few by surprise last year and was one of the genres best in 2014. Pete, who is no spring chicken, made his debut on this In Faith album, and boy was it a good way to introduce yourself, but hungry to be in a band rather than a project so to speak, he formed Blood red Saints with Rob from Angels Or King (another nugget from 2014). So, do two nuggets make a diamond? Read on……

The search for a name came and ended with a chance discovery of a semi legendary speedway team, ‘The Blood Red Saints’ who were formed in Brooklyn in the late 1920s. Their leader was Freddie Rendetti who was allegedly a fiery and colorful character who ultimately lived the fast life a little too fast. It builds up a great background story, right?

Enlisted in as honorary mechanics are James Martin (Vega) who was instrumental in getting the band signed to Frontiers and along with his twin Tom, co-wrote 2 songs on the album. Chief mechanic comes in the form of Harry Hess (Harem Scarem) who mastered the album

The band is completed by another former In Faith member, drummer Pete Newdeck, and on guitar, Lee Revill.

Kicking Up Dust offers up a very lively start. Revill goes all George Lynch on us and it’s a more melodic and ‘sing-ier’ version of Dokken. It offers up more kick and punch than a school full of kick boxers. Throw in Godfrey’s melodic vocals and it makes this one of the tracks of the album, and the year.

Mercy is just an extension of ‘KUD’ instantly hummable and with more than enough bite and hooks to keep the melodic rock fan pulling windmills on his air guitar for days. ‘Best Of Me’ takes its lead from the likes of Foreigner and once again, is under your skin in double quick time. The BVs are so simple and so bloody effective. ‘Dangerous’ fades in and out, subtle one moment, then prowling and pulsating the next. ‘Love Set Me Up Again’ Is BRS Ronseal agreement for a power ballad. Godfrey even sounds like Jon Bon, only when JBJ was good! ‘Better Days’ honestly wouldn’t go amiss on the recent Def Leppard album, as the vocals mirror Leppard at their trademarked best. Should we still live in an era where MTV was king, and made bands millions and household names, then ‘The Best Thing’ could have done the same had it been performed 30 years ago. Thankfully songs of this quality are still being written. ‘Unbreakable’ and ‘Wrapped Up In These Arms are VERY FM–like, and what’s not to like? For my liking, there’s probably one to many ballads, that’s just a small gripe on my part.

It’s hard to sound original nowadays as so many have trodden the path before them. BRS will be likened to the likes of Giant, FM, and Dare etc, and rightly so. These are bands that were (still are) masters of their trade, and BRS deserve to be likened with such.

There’s been a fair bit of ‘average’ pushed onto the melodic rock fan on 2015, and ‘Speedway’ is anything but average. It isn’t perfect, (its no Night of The Crime) but there’s not a dodgy song or filler in sight, and that makes it one of the best, if not the best melodic rock albums of 2015.

Bands like Blood Red Saints deserve to be huge, HUGE!

BRS have an album launch on 4th Dec at the Railway, Bolton, then HRH AOR 2016, in which I predict they will level Pwllheli!