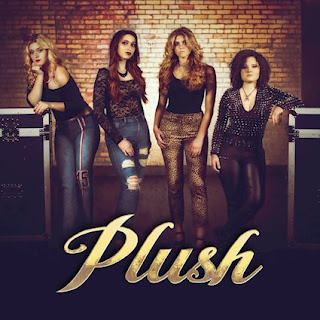 I first came across Moriah Formica (not that way you perv), a couple of few years back when she duetted on a Michael Sweet solo album, ‘One Sided War’. Back in 2016 I predicted great things for her even back then. I’ve kept a distant eye on her career and have been hotly anticipating this debut Plush album after seeing some of the covers they have been releasing. My appetite was completely whetted when they posted their ‘shit-hot’ version of Alter Bridge’s ‘Isolation’.

‘Plush’ is composed of four talented women, under 21, whose accomplishments and talent eclipse their age. This female rock force is fronted by singer, songwriter and guitarist Moriah Formica. Drummer Brooke Colucci, guitarist Bella Perron and bassist Ashley Suppa round out the lineup.

When I said hotly anticipating, I thought it would be a good debut, but I wasn’t expecting it to be THIS. FUCKING. GOOD. If anyone was thinking fluffy girly metal, then you couldn’t be more wrong. After stating recently that Nestor’s debut was one of the best I’ve heard in a long time, along comes Plush with an equally superb debut album.

‘Opening with “Athena” Plus ready do set their stall out early. It has a really heavy, dirty riff from Bella Perron that Mark Tremonti would be proud of punches you like Bruce Lee only wearing an iron glove. Harmonies are a-plenty, and the rhythm of Brook Colucci and the pulsating bass of Ashley Suppa drive this on to stand head and shoulders in the pack. Throw in Moriah Formica’s stunning vocal range and it make for one sumptuous recipe. Think Ann Wilson or Kelly Clarkson singing for Alter bridge and you will get where I’m coming from. “Champion” “Found A Way” and “Hate” are more melodic, but still pack a hefty punch.  Perron has a great guitar tone and Formica’s vocals are crystal clear.

“Sober” is a powerful anthem, moving from acoustic to electric and is an emotional ride digging into the lyrical content. “Better Off Alone” is a song where Formica is wearing her emotions on her sleeve, and if auto-biographic, has drawn on some life affirming decisions. Bella Perron earns her weight in salt with her guitar playing. “Sorry” is nicely paced, branding from stripped down to a strong phrasing of ‘Sorry’ for each line of its chorus. “Why Do I Even Try” uses Formica’s instrument (her voice) and interplays with Bella Perron guitar licks. The Princess of Pound (Colucci) and Suppa are up front and centre on the dynamic “Bring Me Down”.  “Don’t Say That” is the true ballad on the album, and shows that Plush have a lot of strings to their bow. If this was the late 80s, Plush would be sitting on a Top 10 Billboard song, and playing arenas within weeks of its release.

“Will To Win” matches ‘Athena’ for its heavy riff and these songs sit really well in Plush’s wheelhouse. All 4 are on top form here, and Formica’s vocals shine. This is a nice composition and Perron lays down some understated riffs. I just with she was given more slack to let rip with her talent.  It’s only on Closing track “Walk Away” where she has anywhere near an extended solo. Moriah wails ’I’m gonna walk away, walk away from all the pain’ and you know she means it. At 13 songs and 50 minutes it flew by. There’s not a duff song on here and that is something else.

Plush have clearly done their homework. In Formica they have a singer songwriter that is a shining light in modern metal now, and hopefully for years to come. It easy to over sing when you have an instrument like Formica’s voice. She knows when to be subtle, when to let loose and when to emote.  Add the undoubted quality to Colucci, Suppa and Perron, and its   delicious. The four women complement each other perfectly to become Plush. They have avoided the pitfalls to be a ‘saccharine-coated-look-great-but-no-substance’ band and come out all guns blazing. If they are doing this now, then I cannot wait for what’s to come in the future.

To write and perform an album that is so contemporary, mature, and with a wink to the past, with all band members at a (relatively) young age is remarkable. Ok maybe not remarkable as I’ve seen their videos leading up to this release so it shouldn’t be a total surprise. They have lived up to my expectations, and gone way beyond it. ‘Plush’ is a simply marvellous album. Look out boys, the girls are here to kick your asses!

I haven’t been this excited about a band since I found Rival Sons, Alter Bridge and Coheed And Cambria. Plush sit in great company

Why Do I Even Try 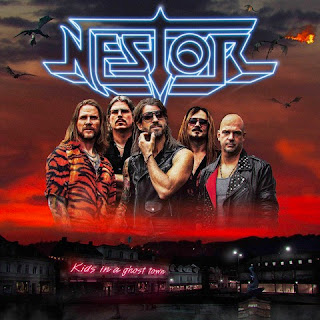 NESTOR - KIDS IN A GHOST TOWN
I’ve been reviewing albums for almost 15 years now, and occasionally an album is sent to me that completely blows me away. Usually its from an unknown band or artist. In this instance the band is called Nestor. Its not just me who knows this fact,  with three previously released singles this year and close to a million plays combined for the songs and music videos, the hype is enormous for the upcoming album ‘Kids In A Ghost Town’ which is due to be released on the 22nd October.
I asked Nestor’s vocalist Tobias on the band name as I thought it might be taken from Greek mythology, “Exactly, the name comes from Greek mythology and refers to an elder, a wise old man and all that, but us in the band are all big Tintin fans so the name is taken from Captain Haddock’s butler in the comic books, his name is Nestor and he’s a really cool character, haha!” I thought I’d heard that name before as I used to own about a dozen Tin-Tin books myself. Nestor was formed back in 1989 by five childhood friends in their hometown of Falköping, Sweden. But like most dreams of becoming rock stars, theirs faded away with time - but their friendship remained, as did their love of music. Now over three decades later the members have taken the opportunity to reunite the band! I for one  am bloody glad they did as ‘Kids In A Ghost Town’ will sit at the top of the best album list for many a melodic rock fan come the end of this year.
‘One The Run’ is one of the best opening stacks I’ve heard in quite some time. A dainty piano opening before a battering salvo of guitar riff and drums beats you into submission. The accompanying video is a true homage to 80-s vidz and would happily sit in the soundtrack to Turbo Kid. You have to check out the stripped back piano version on YouTube which is  absolutely brilliant. I immediately fell in love with the tone and warmth of Tobias Gustavsson’s vocals. Even a song with a corny lyric like ‘she’s got eyes like Demi Moore and a body like Sharon Stone….she’s a perfect 10!’  can’t detract from the quality. It still hits the mark. Samantha Fox proves to be an inspired choice for the duet ‘Tomorrow’. As I’ve got older I steered away from ballads but this one is an absolute knockout.
Apart from the aforementioned songs the other suggests are the glorious anthem ‘1989’; It Ain’t Me’ has the orchestration that could put in on a Bond movie; the galloping title track ‘Kids In A Ghost Town’; the chorus of ’Stone Cold Eyes elevates a good song into a great one; and These days would have been a big hit in any year beginning with ‘Nineteen-Eighty-Something’.
Melodic Rock/AOR is the poor relation of probably every musical genre on the scene today. It wasn’t that popular when it was popular! That said, those like me that love it have been hit with many a pretender these last 30 years who promised much and faded away or just didn’t deliver. These guys are the real deal. I hardly give away top marks for an album (13 times in 14 years), and this gets top marks. Everyone gets credit - the keyboards are high in the mix, guitar solos are shredding, harmonies are to die for, a wonderful combination, and the vocals are crisp, warm and clean.
In 2021 Nestor’s ‘Kids In A Ghost Town’ will be as coveted as Red Rackhams Treasure.
10/10
Tracklisting -
Fanfare For The Reliable Rebel (Intro)
On The Run
Kids In A Ghost Town
Stone Cold Eyes
Perfect 10 (Eyes Like Demi Moore)
These Days
Tomorrow (Feat. Samantha Fox)
We Are Not OK
Firesign
1989
It Ain’t Me
Nestor Are -
Jonny Wemmenstedt (guitar)
Mattias Carlsson (drums)
Tobias Gustavsson (vocals)
Marcus Åblad (bass)
Martin Frejinger (keyboards)
Posted by aorwxm at 12:57 No comments: