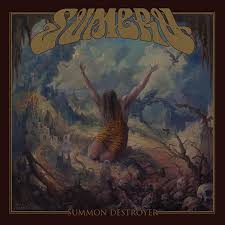 A band known for their passionately fierce and ear crushing live shows, Sumeru’s onstage energy is exerted with an almost fanatical dedication that it verges on a cult-like rite of sonic exorcism and visceral upheaval. Add in the long-crafted musicianship of each member of this Sydney 5 piece, their ability to peel subconscious layers off of their audiences was apparent since their inception in 2009. Having shared the stage with foreign imports and domestic legends such YOB, Torche, Nick Oliveri (back up band & support), Windhand, Nails, Blood Duster, Beastwars, IEXIST and Lo! Sumeru now stand firmly grounded in the Australian heavy music underground as a defining force of pure riff fury and indomitable low-end groove.

This is right up my street!! I’ve never heard an album start with such a haunting and frightening intro. I’m talking Evil Dead-esque! ‘The Temple’ gets us back on track. There’s lots of Pantera on offer here, and if you love Pantera, you will love these guys. Its moody heavy riffs and some angry vocals make this a very enjoyable track. Title track ‘Summon Destroyer’ a 7 minute epic, edges us away from the doom metal to a more upbeat rock anthem, and is still heavy in it’s own right. There are speed changes galore here, and why not? And before you know it we are back hammering out the heavy stuff. Its truly  is intense and perfect.

‘Embrace The Cold’ gives us a Manowar-style galloping riff which works well, and lyrically here it’s very Nirvana. Every now and then I can hear Holy Terror. These guys influences are clear to hear. ‘Kala Ratri’ is a one minute long acoustic jam, which to me would have been better being the intro for ‘Durga!Durga!’ and not a separate track. There’s some absolute stunning intensity going on with this track. These guys I imagine will be amazing live. Intense, dark, angry, in your face. ‘Durga!Durga! has a riff in it that’s an absolute steal of S.O.D’s ‘March Of the S.O.D’.

As we reach ‘Rivers Of Lethe’, I can only describe this as a pure out and out hard rock track that hits you in every spot. And so we reach ‘A New Ritual’, a 10 minute album closer which can only be described as a comforting, confusing track. The string crunching riffs have been replaced by mellow tones, and the angry vocals have been replaced by some proper singing. Diversity. It’s anthemic in every way, intense in every way, and keeps you gripped right up until about 7 minutes in when the guys suddenly unleash a brutal Black Sabbath style riff on you. Suddenly we are back to the anger, but I don’t know where’s it’s come from. These guys have built it up so cleverly. Its amazing stuff and a brilliant album finisher.

I have got to catch these guys live. 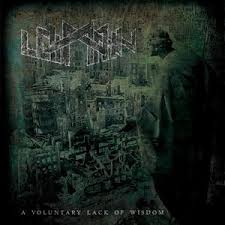 Italian Post Doom metallers LOIMANN just recently unveiled the hotly anticipated details about their upcoming third studio album 'A Voluntary Lack of Wisdom', which is set to be released on November 9th 2018 with Argonauta Records!
Formed in 2001 under the major influences of desert rock bands alike Kyuss, Fu Manchu or Monster Magnet, LOIMANN's sound evolved over the years for a more doom and heavy psych approach. Recorded at O.F.F. Studios in Torino during the summer of 2017 with Paul Beauchamp and Salvo Arico (Marmore/Khoy), the band's new work partially changes the direction compared to the previous records, with a more direct and easy listening sound while never losing their heaviness.

„The Songs are shorter, more “in your face” (no keyboards at all this time) and with less complex songwriting“the band explains. „On the other side we think we managed to obtain a more extreme result, with more growls and screams, concerning vocal parts and blackened post-core breaks coming out from doom/sludge riffs and atmospheres. The lyrics are centered on how human race is slowly approaching its extinction thanks to wars, pollution and thanks to how many human beings are becoming sort of involute individuals, thanks to the predominance internet has in their lives.“

Another band that I had never heard of lands on my doorstep, and another band I wish I had heard a long time ago.  ‘Slaughterhouse no.5’ kicks off the album through sheer brute force. There’s a punky feel to it. It reminds me of my teens when I’d be moshing on the floor to the likes of Bomb Disneyland and Carcass and the like. ‘I Own The Right To Tear Me Apart’ confirms that what I’m about to get sucked into is an intense hour or so of piercing thrash and doom metal mixed into one, so I’ll hold on to my hat. The speed changes in this track are quite remarkable and there’s a beautiful tone to the bass when it solo’s. ‘For Those About To Sink’ has a more melodic feel to it but still manages to gallop along when required. There’s some nice bridge riffing in this.

The songs I’ve heard so far seem to be pieced together with different sections and it works really well and makes the songs very enjoyable. ‘Living In Fear Of Death,Dying In Fear Of Life’ turns the melodic side of Loimann straight on its head as the crunching opening riff hits you like a steam train, and then slides into a doomy, intense verse. I can imagine these guys being brutal live. ‘Mass Redeemer’ starts off slowly and moodily and slides into a deep dark intro which had me hooked all the way through as it eventually kicks into a verse which has a strange mixture of melodic singing and growling which I still cant work out whether it works or not. ‘Moral Dismemberment’ starts with a very clever and laid back intro which takes you away on a tangent if you close your eyes for long enough, and then presents us with a classic Kyuss riff for its verse.

It’s a great album this and very well produced.’ V.I.T.R.I.O.L. (Vacuity. Ignites. Tremendous. Riot. Inside. Our. Lives)’ kicks in with an awesome late / Napalm Death style doom riff but that quickly vanishes into a fast-paced verse. Probably the best start to a song on this album. ‘They Live’, followed by ‘Outro’ close this brilliant effort. Outro for a few seconds sounded like the opening intro on Pearl Jam’s debut album ‘Ten’……………….but only for a few seconds. Overall very enjoyable album and would love to catch these guys live. 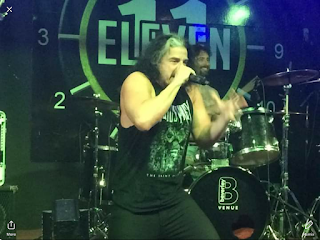 Having reviewed Ross The Boss ‘By Blood Sworn’ album a few months ago on this site, I was super-excited to be going along to see the guys live in what seemed to be (prior to getting there) a very intimate venue.

What a fantastic set-up ‘Eleven’ have. It’s intimate, personal, and a perfect size to watch and get close to the guys you’ve come to see. Prior to the gig, we were treated to a free ‘Meet & Greet’ session with Ross, as he gave out guitar picks, posed for photos, and was a general fantastic, friendly and loveable guy. He had some great stories to tell, and made sure he spoke to us all. Brilliant. 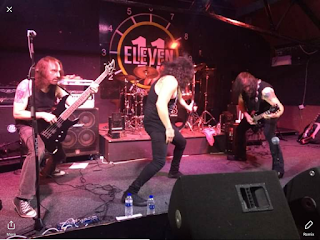 And that’s exactly what followed on stage. It was a very disappointing crowd of only around 40 people, but this did not stop the lads putting on a perfect and professional display of superb tunes, great crowd interaction and non-stop metal. Whether the capacity of 250 or the reality of 40 people, RTB performed no different and it was a night to remember. Performing Manowar classics, the gig kicked off with ‘Blood of the Kings’, followed closely by ‘The Oath’, and the guys seemed to be enjoying themselves as much as the crowd, drummer Steve Bolognese donning a constant beaming grin through each song. Brilliant to see.

Talk about making the most out of a challenging situation, Marc Lopez showed us all what an icon and presence he is on stage. Continuously moving, getting close to the crowd and getting everyone involved. As the band powered through classics such as ‘Sign of the Hammer’, ‘Hatred’, and ‘Blood of my Enemies’ it was clear as crystal what was going on here. Myself personally, I came to hear songs from RTB latest album ‘By Blood Sworn’, but the crowd were just revelling in the Manowar classics, and after this gig, I get it, totally. The tracks were played with such stunning power it was just too good, too, too good.
Next came ‘Kill With Power’ and ‘Each Dawn I Die’. 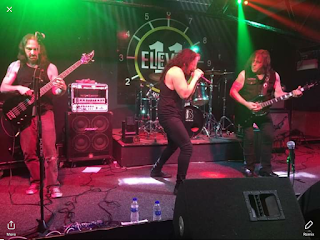 What a singer Marc Lopez is. This current line up I believe is the best Ross has had. It just gels, especially live. ‘Hail to England’ got us all singing and is just an absolute stunner live. ‘Great Gods Glorious’, ‘Fighting The World’ and the absolutely stunning ‘Battle Hymn’ followed. The latter being one of my highlights of the night. Marc Lopez providing some superb vocals.
The guys finished with ‘Thor (The Powerhead)’ and the amazing ‘Hail and Kill’, with it’s almost 5 minute unreal blues jam. It’s been an absolute pleasure tonight seeing these guys bring such a huge show to the small stage, in a small venue, to a small crowd.
‘Hail and Kill’ tonight showed the strength and diversity of this band. My heart bleeds for them for such a small crowd. But tonight I will be so proud to be part of a bunch of people who got to see such an amazing band up close and personal. Next time, I’ll be there again. Hail & Salute RTB!! Thank you guys. xx