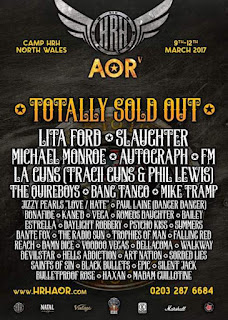 So a good couple of thousand descended on the tiny Chwiliog,  aka Hafan Y Mor, for this, the fifth HRH AOR. Once shared as a fest, it's now finally gained its own independence as a stand-alone festival which shows how strong this genre has become. AOR has always been an underground scene, but the people who follow it are very passionate and dedicated about their bands. A lot of the audience are returnees, in fact most can be seen at any melodic rock gig across the country and beyond. My only gripe, there was NOT ENOUGH AOR!!!!

Credit to HRH, as this is a mighty fine festival, it's all contained, the stages are close, except the acoustic, the food is a bit 'meh' (OK if you can live off Fish n chips, and Burger King, or Starbucks) and the drink plentiful. It leads itself to a nice warm, cozy and very friendly festival.

My day started on the Friday with a couple of stunning acoustic sets courtesy of The Radio Sun, and then the same guys being joined by Paul Laine. It's great news to have The Radio Sun returning for second year in succession. The Aussies certainly made an impact last year and gained a lot of new converts along the way. First of all, the banter is great, we got to hear about the guys travel from South to North Wales and their traffic encounters, and Jason being one of the 'Wiggles"! Don't ask! It's the quality of the songs that make the biggest impression. 'One In A Million' is just wonderful, it highlights just how strong TRS are with harmonies, in fact very few of the bands over the whole weekend can match these guys. 'Wrong Things Right' and a sterling Andy Taylor cover 'I Might Lie' (the one with the riff that’s VERY Eddie ‘Beat It’)! 'Maybe' finished off a short but very memorable set. (8.5/10) 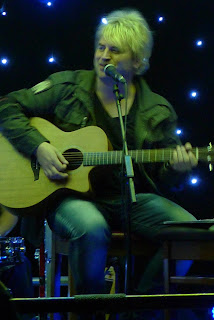 Without any further ado Paul Laine stepped up and you knew he was going to be trouble (but in a good and very funny way!). Paul set up a high seat in front of him so he could read some of his lyrics. Bless him. Obviously a forgetful chap, he has self-declared Paulzheimers! 'Going All The Way' eventually kicked off the set. Paul's vocals would be one of the best over the whole weekend. You can tell that both TRS and Paul had spent time with Blood Red Saints as jokes and insults a-plenty were traded between Paul and Jason....'Does The Rock know you've stolen his 80s haircut?', and 'Jase, you're doing this (makes yapping sound with his hand)' and I want you to do this (shut up hand signal).  You had to be there!! There's a new double act in town folks. That said, I think it's all stemmed from love and respect. But, it's his show, so Paul is in charge. Up came 'I Still Think About You' and it was just sublime in this acoustic setting. Laine’s vocal's are undiminished from the fist time I ever witnessed him from his performance at The Gods over twenty years ago (on the telly). After 'Comin Home' we were even given an encore of 'Dont Walk Away'. TRS firmly set the bar for the weekend, and Paul Laine raised it. These two sets were to be one of the main highlights of the weekend. About 120 people witnessed something special here. (9/10) 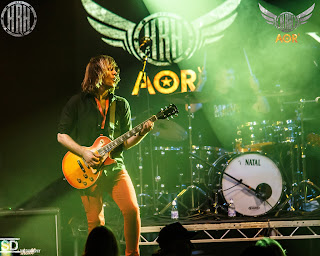 We legged it to the main stage for a band I'd only looked at the day before....Walkway. As far as first bands go, Walkway were the best opening act I've seen at 4 AORs. This is a band that clearly tour…..a lot! I missed the first three songs, and entered for ‘Overrated’. That’s one thing that this band definitely are not.  Their set is smooth as silk and very polished. They are not exactly AOR, more classic rock, but when it's as good as this, who cares. Frontman Chris Ready obviously has Robert Plant as an influence, and this is no complaint from me. With a song armoury like ‘Best I Ever Had’, Stutter’, ‘Rise’, and the instantly memorable ‘Streetwise’, I really hope these lads get the major break they deserve. Guitarist James Ready, who was fucking outstanding I have to say, went on walkabout during the final song ‘One Touch Too Much’. Walkway were another memorable highlight of the day and weekend. Catch them live again if you can, you will not be disappointed. If you are, I will refund your money myself!!
(8.5/10) 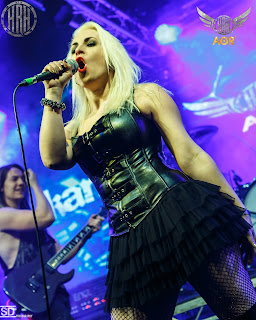 Last year I loved Kane'd(s) brand of music. More Within Temptation, than melodic rock, but their difference stands out in sisters Steph, Stacey and Chez, and lead guitarist Harry Scott Elliott. At first glance, there’s that many of them, you would think they are a Caucasian tribute of Earth Wind & Fire. However, this time something was amiss, the spark wasn’t quite as bright this time. It wasn't all Kane'd isuue as I had doubts over the quality of the sound. The vocals were too loud and pitchy. It was eventually sorted and the songs do the talking – the highlights being ‘Beautiful But Tragic’, Guilty Of Nothing’, ‘Covered In Roses’ and the utterly infectious ‘La Di Da’. What with a guitarist like Harry Scott Elliot and the vocal assault from the girls, I fully expect greater things from this bunch moving forward. Time for a new album I think and a move up the next step of the ladder….? (7/10) 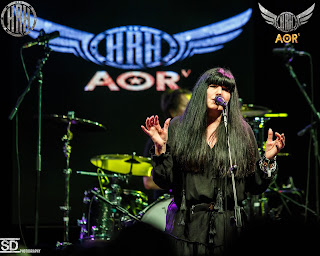 It was time to show the young whippersnappers a thing or two. Romeo’s Daughter are a class act. I’ve seen them quite a few times over the last (cough), thirty years, and they have NEVER let me or the audience down. The set was to be quite wide ranging, mixing the old and the new seamlessly, proving that the new songs are just as good, if not better than the older songs. Leigh Matty looks gorgeous as ever, and if there were awards for best hair, she would win hands down. In Craig Joiner, Romeos Daughter have one of the most underrated but finest songwriters of his generation. His playing isn’t necessarily flashy, but its honest and from the heart. ‘Heaven In The Back Seat’ - a song that should have made them household names, opened up a short but superb set. The good side of playing a 55 minute set…..all the stops are pulled out. From ‘Velvet Touch’ from the 80s, to the likes of ‘Bittersweet’ and ‘Radio’ from more recent years, Romeo’s Daughter have not lost any of their effectiveness. They finished the set 80s heavy with the upbeat ‘Inside Out’, ‘I Cry Myself To Sleep At Night’ - one of my all time favourite tracks, and finishing with a blast of the song that Heart covered, the obligatory ‘Wild Child’. Great stuff. (8.5/10) 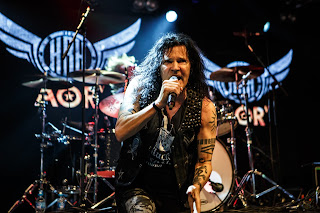 All of a sudden, when you thought the main arena couldn’t get any busier, it suddenly became almost unbearably full. In three previous visits, I’ve never seen the arena as full as this. The reason I hear you ask……’Jizzy Pearl’s ‘Love/Hate’. Fair play to whoever built a massive cross out of Budweiser cans. They opened with ‘Wasted In America’ and the crowd went nuts. If anyone on the bill, looked like they had lived, loved and survived the 80s up until now, it was Jizzy Pearl, looking all the part a rock star. I’m going to wind a few people up here but the vocals got on my wotsits a little bit. It was like someone was kicking a bagful of Yorkshire Terriers around. I caught the first seven songs, and whilst I enjoyed the set. I wasn’t as keen as all the people around me, which is probably because Love /Hate aren’t AOR to me. Although I am sorry that I missed the rock classic ‘Blackout….’ (6.5/10) 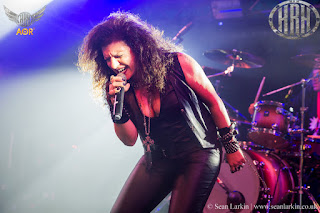 I trundled over to the second stage to catch HRH virgins Epic. Fronted by the spectacular vocal range of Tanya Rizkala Agostine (she’s not Welsh!), this is a band (Like Bailey) that should have been performing on the main stage. If you haven’t heard of Epic, where have you been? Opening with the extremely powerful ‘Love Will Find A Way’ Tanya’s vocals were even better than the recorded version. Epic give the bigger and more established bands a run for their money. Great things come in small packages, and that’s what Tanya is. Her vocals could strip paint at 50m, and couple this with the fretwork dexterity of Mario Agostine and some Billy Sheehan-esque bass playing from Carlos Bouchabki for great effect. Throw in drummer Souheil Moukaddem, and Epic give one of the performances of the weekend. Again, its more classic rock per se than AOR, but us AOR fans know a good band when we see one. As the set went on the audience grew. My fave was the 80s rifftastic ‘Like a Phoenix’ followed by a great rendition of AC/DCs ‘Highway To Hell’. For some reason their allotted time wasn’t filled, and they finished with the sexy ‘Nah Nah Nah’ five mins earlier than expected.  I’d like to see Epic re-invited as they deserve another crack at the main stage. This was another highlight of the weekend. (8.5/10) 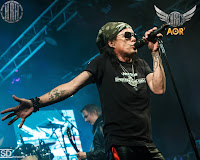 I scuttled back across to the main stage to view the last three songs of Bang Tango. They were a band I never got into in the 80s and the reason was in these last three songs. The vocals were whiny and just poor. The crowd around me heard a rendition of ‘Highway To Hell’ and went nuts, but Epic did it so much better ten minutes earlier. If I was harsh on Jizzy Pearl, then Joe Lesté fans should stop reading now. This sleaze (not AOR HRH!) was as fun as a root canal without the anaesthetic. And then doing it all again....and again...and again...(4/10) 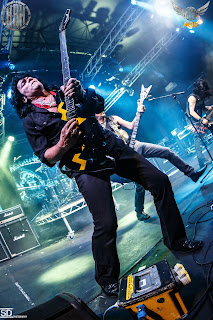