I would absolutely love it if the first band on the list wasn’t actually a bona fide band, because ‘Always The Quiet Ones’ didn’t show. I had to check my watch that it wasn’t April 1st, because what they did was almost a masterstroke.

Second up!?, 'Mother Of Six', should have taken a leaf out of ATQO book and not turned up and saved themselves from a lack of support. Opening with Artificial Aid (an instrumental of sorts) it lacked any substance or quality. When the (stand in) vocalist appeared for the second song I almost wish he hadn’t as his stage presence was lacking somewhat. It was like a musical version of a Man City fan, he faced the back of the hall for a good part of the song, and when not doing this, just looked at the floor or towards the roof and had no connection with the (small) audience at all. Their third song started decently enough but really fell apart in the middle (drop this section and you’d have a decent track to build upon). Despite my (personal) lack of enjoyment a decent effort was made considering the circumstances.

Now with ‘Blood Runs Deep’ the ante was upped quite bit. Sound was much better, the quality definitely was upped a notch. Hailing from Switzerland ‘BRD’ was here to give it some welly. In Denis Vera they have a young lad who could take them very far. A guitarist in the mould of a Sykes/Gilmore/Page who adds a certain melodic style to a death metal/gothic doom band. With this style of singing, straight out of the Mikael Akerfelt school of vocalisation, it’s difficult to get any meaning or content from Stefan Vida, but musically these guys ripped! They even had a prominent keyboard (which was rather nice!), and a shit hot drummer holding up the proceedings. It’s not a happy set of songs, ‘Lost Myself Again’, ‘These Thoughts About Suicide’ ‘Overdose Anaesthetics’, and ‘Suicide Is Life’ the latter being the best song of their short set. BRD could mistakenly be classed as Death Metal, but their music is 100% influenced by Classic Rock (Sabbath/Floyd/Zep etc).

If you’re out to catch APHND, it’s definitely worth getting out to catch Blood Runs Deep. If Doom/Goth/Black/Death is your thing, only played with a bit of classic rock finesse then you will not be disappointed. Putting my Anglophile hat on Switzerland is renowned for Alps (and a certain lookalike choc bar)/ Watches/ Army knives, but now I’m convinced that BRD will be putting Metal firmly on the Swiss map.

Onto the main event. Firstly what a bunch of twats are working the desk for the gig. Not employed by the band, the 2 nuggets involved, inbetween chatting amongst themselves and pissing about with their phones, couldn’t find their arses with both hands tied behind their backs. I checked out the band and asked if they liked playing in the dark as they were only lit from behind, Fuck me! It could have been anyone playing up on stage. If money is that tight Central Station I will bring 50p with me next time for the meter. See what I mean below... 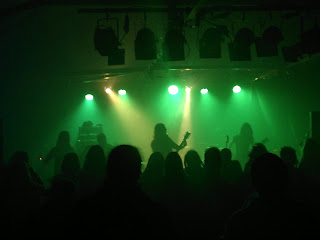 Apologies, back to the band. A Pale Horse Named Death were here to promote (pretty much in its entirety) their debut album from 2011, ‘And Hell Will Follow Me’. Again like BRD, the songs on offer don’t lead to a happy & fluffy environment. A purgatorial odyssey of drug abuse, nightmarish deleriums and agonizing meditations on loss. Sounding like prime Alice In Chains throughout, these ashen songs – from the Burroughsian narcotic haze of ‘Heroin Train’ to the psychopathic discharge of ‘Serial Killer’ – are inescapably bleak, but quite compelling. Vocallist Sal Abruscato, and guitarist Matt Brown, define themselves as ‘’the murdering evil version of Lennon & McCartney’’. And you know what, I cant argue with that at all. 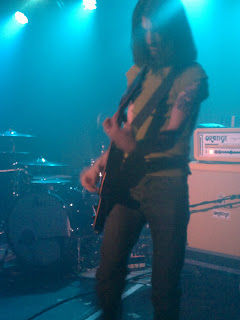 Type O’s original drummer (Sal) has moved to the front of stage for this band to lead his own way for A Pale Horse Named Death, and does so with great confidence and attitude. They clearly do not mimic Type O Negative, but use them as a creative influence alongside the afore-mentioned Alice In Chains.

Opener ‘To Die In Your Arms’ has a grinding riff keep the headbangers in the crowd happy. You can feel the pain and despair in his voice.  Whilst not the best singer in the World, Abruscato holds a tune, and can be more in the Rob Zombie camp of vocalization. 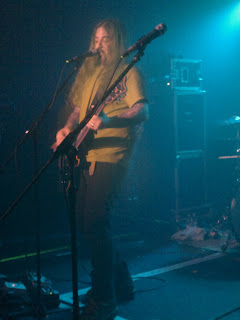 When a band has only one album to plug there is a tendency to play everything, and that’s just the case here (except for ‘Bad Dream’). Not all hit the mark for me, but hey, it was my first ever experience of APHND, but they did have some pretty useful songs – ‘Cracks In The walls’ being a more classic rock number, ‘Heroin Train’, ‘Bath In My Blood’, ‘Serial Killer’ in particular will become staples in their set over the coming year.

Whilst not my fave type of music, APHND put on a pretty good doom laden/gothic show. I suggest getting down to see them on the remainder of the tour as new bands like this deserve all the support they can get. For a tiny crowd like Wrexham (shame on you people of Wxm for not showing) APHND never let it get to them and put on a sterling performance. A cool bunch of guys.

So I didnt go to any of the festivals in 2011 - Download & Firefest being my main two I have liked to attend, so I have just concentrated on the single gigs of 2011, by a headlining act, or even the support!! (Yes they were that good)

70s style rock goddess with a voice that makes grown blokes cry into their beer. Their first headline tour of many in late 2011 will surely lead them to much bigger venues than the Academy 3. A band to watch out for in 2012

Another heavily influenced 70s classic rock band from LA. Yes its like getting into a DeLorean and watching Led Zep, but who gives a flying f*ck. Absloutely brilliant. They will be huge! Another band to watch in 2012

Billed as their last tour, I understand further dates have been posted for 2012. As camp as a custard fight between Julian Clary and Alan Carr, Priest (like Kiss) give their fans exactly what they want. Next time Mr Halford I expect you to sing Breaking the Law, and not the audience

Once as rare as a Kate Bush concert in the UK for a generation of followers, Rush are now as regular in the UK as the Norovirus. Still cutting the mustard (even at their ripe ages) they give all the young pretenders more than a run for their money. Playing 'Moving Pictures' in its entirety, a Rush/Rash concert doesn't get mush better than this

Four blokes, utterly skilled in their own crafts (and each others come to think of it) Mr Big came, saw and conquered the UK this Summer. Excellent dexterity and layered vocals from all concerned it was one of the unexpected highlights of 2011

Marx has been a whipping boy for many people ever since he came onto the scene in the 80s. But boy, can this bloke sing. A solo performance that slayed the UK audiences and proved that he can still perform with the best of them. Just don't wait another 20 years until your next visit 'eh! I don't think I will be still alive and kicking by 2031

If there ever was an award for 'Metals funniest bloke', Akerfeldt would win hands down. A definite sea change over recent years now he has set his and Opeth's stall firmly in 70s Prog-land. Some fans will surely be lost along the way, the recent tour was probably a surprise for even the most hardened fan as they stuck firmly to 'mellow'. Even I would have preferred the odd Death Metal nugget, but alas it wasnt to be the case. If they had have just played 'Deliverence', Opeth would have been No.1 in the list 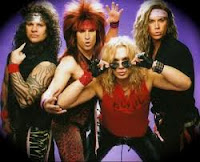 First band on the bill, they absolutely blew away the competition they were taking the piss out off. Tommy Lee doesn't get it, but that's because Steel Panther are playing music like Crue dreamed of (then and now!). If Michael Starr wasn't a DLRoth impersonator before SP I will show my arse in what was Woolies shop window.  Extremely talented and even funnier, they deserve to be taken seriously. I beg you to catch them on tour in the UK in March

This should have been billed as the 'Tour without any original singers' tour!. Styx were as polished as a highly polished thing, but Foreigner with Kelly Hansen on board blew away all concerned - yes that means you Journey!. Foreigner now have a new lease of life and with Hansen looking like Steven Tylers younger brother, Foreigner now have a singer than can sing the songs live just as Mick Jones intended. Mick must be laughing his cock off. THE surprise gig of the year

Been a huge fan of AB since the beginning. I for one was delighted and surprised that they had stepped up a gear and playing the arenas in the UK. In Myles Kennedy they have a 'bona fide Rock God' who can sing anything thrown at him. Just ask Slash who has a guy for the first time ever who can sing songs just as he intended. Ranging from Metal to gut wrenching balladry, AB are one of the best live bands I have witnessed in the last 30 years.They deserve everything that is due to them. Unfortunately there will be no AB activity in 2012, so I will have to settle for the DVD release due out early 2012