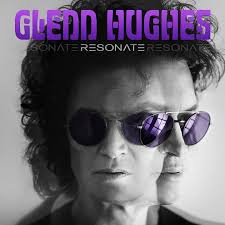 I have to admit, if I had a voice like Glenn Hughes, I myself would call it ‘The Voice of Rock’. Few singers, and I mean few have the set of pipes they were singing with 30 years ago. In Hughes’ case, make that almost 50 years. The bloke is a phenomenon. Most people’s careers would have been cut short had they taken more than Calpol for a prolonged period in the 80s. Thankfully Hughes came out of that decade relatively unscathed, and now in 2016 we have his long awaited solo album, Resonate. It’s been 8 years since his last (Jesus where does time go?)

The last few years have been troubled so to speak, a falling out over BCC (but now thankfully resolved and back on track), and the quite short lived (but excellent) California Breed album. I get the feeling he could be demanding. But after a stint with Blackmore, who wouldn’t be!

The fire has obviously been raging within Hughes as he’s has served up one of his best efforts yet - whether its a solo album, Deep Purple, project or otherwise. One thing you know you’re getting from Hughes is his bluesy, soulful tones. He could almost call it Ronseal and not Resonate as you know exactly what you are gonna get from him. That said, the Hughes hammer falls more on the rock side than his soulful side for resonate, and that people is one huge plus. The opening bars of ‘Heavy’ are offering up his intent. Hughes voice rips though the speakers on the chorus, and into your ears. Coupled with Chad Smiths pounding drums and Soren Andersen’s guitar riffs, and it makes for one memorable opening track. Thankfully he is not intent with taking his foot off the gas at any point, with ‘My   Town’. It has Pontus Enborg on drums for this and most of the album, and again it just pounds you into submission with that glorious chorus. Hughes is truly on a mission from God.

“Flow’ begins with a huge, dirty riff that a lot of metal bands would die for, and is a huge slice of stadium rock. ‘Let It Shine’ is a song that seems to come effortlessly out of Hughes, and shows his versatility for just a melodic number as he side steps the Classic Rock vibe for a second. ‘Steady’ harks back to the days of Deep Purple with its organ intro with Lachy Doley giving his all, before the band wade in in equal measure. ‘God Of Money finishes off what would be Side 1 so to speak with a doom lade, track driven by Hughes’ bass guitar. The opening bars to ‘How Long’ are the type that used to fill stadia in the late 60s a huge swirling wall of sound. The album take off at a big tangent with the restrained ‘When I Fall’, built on Glenn Hughes rich and soulful voice, mellotron, and orchestral strings and proves to be a beautiful vehicle for ‘that’ voice.

Glenn heads home to the funk with ‘Landmines’, and is akin to the early days of RHCP, whereas ‘Stumble and Go’ is a straightforward rocker with a riff that reminds me a little of Neil Young’s ‘Rockin’ In The Free World’. Chad Smith returns for closer ‘Long Time Gone’, and proves to be a true partner in crime for Hughes. It’s a fine way to end, with some incendiary vocals, and goes for the jugular. Like catnip for the ears, you just want to stick it back on and go through the whole album again.

Hughes has been on autopilot for some of his previous solo albums, but not this one. On Resonate he clearly takes the reins and drives this one forward, every inch a muscling, and powering supercharged beast of an album. I though Frontiers had topped themselves this year with The Defiants, but coming up to the tape its Hughes by a head, make that a length.

This is what CLASSIC ROCK is all about! Resonate isn’t about making a small ripple, it’s a huge wave of sound that will be heard around the world. One of the elder statesmen of rock has pulled off one of the finest albums of his career

It’s a crying shame that he has been forced to cancel his UK tour as this album is something special and deserves to be heard live. Be quick in coming back to your homeland dude, we are waiting….