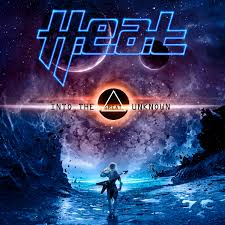 I must admit, I've always looked forward to a H.E.A.T. release. They are one of the few more modern melodic rock bands that could fit in AND hold their own in the BN* or BG* era of music (*Before Nirvana and Before Grunge!). Especially since Eric Grönwall came on board, as this fella is a whirlwind of energy.

I can’t believe it’s been 3 years since ‘Tearing Down The Walls’ was released! Where bands like BCC go into the studio and write and record 23 songs in 36 hours, 'Into The Great Unknown' took place over a period of 18 months, so I’m expecting great things. Dave Dalone/ Sky Davids is back in the mix, not exactly replacing Eric Rivers, more or less returning like your favourite armchair.

‘ITGU’ opens up with the wonderfully titled ‘Bastard Of Society’ and its like a Ferrari ripping through a sheet of glass at breakneck speed. Grönwall sounds the best he ever has. Marry his operatic vocals with some guitar shredding theatrics and a kick-ass chorus, and trademark harmonies and it’s off to a perfect start. Redefined is almost subdued in comparison, but is still effective. If 'BOS’ was great, then ’Shit City’ wins the naming stakes. Its full of their youthful ‘piss n vinegar’ even tough they are not kids anymore. It has a chorus for arenas and the disaffected masses.

’Time On Our Side’ is the polar opposite of 'Shit City', a positive and uplifting vibe, that just drives along at pace and is a personal favourite (so far). ‘Best Of The Broken’ takes a while to get going, and its a case of ‘fuck the verse, lets get to the chorus’ as this is where the meat and potatoes are. ‘Eye Of The Storm’ is grandiose and sees Grönwall reaching for his falsetto and sounding pretty magnificent. It's Eurovision rock at its finest, and is one for the H.E.A.T. fans to devour. ‘Blind Leads The Blind’ has taken its opening synth salvo from 'Tarot Woman' methinks, which is no bad thing. It's what you would define as Scandi metal and it’s running through BLTB like a stick of rock! ‘We Rule’ takes its charm and lead from Queen. It has snippets of ‘Who Wants To Live Forever’ and just builds to a huge climax (F’narr!). Queen would love a song like this to perform. With the wonderful lyric ‘Is the turbulence that cause my mind to spin like a sex train off the rails’, ’Do You Want It’ is built for the live stage and would easily submit to being an extended mix dance track.

If H.E.A.T. have gone out of their comfort zone to make ‘ITGU’ then look no further than the seven-and-a-half minute closing track ‘Into The Great Unknown’. If they were aiming for their very own ‘Blackbird’, ‘Heaven and Hell’ or Stargazer’, then H.E.A.T. have achieved it. They have thrown all they can at it, it even borders on prog.

All the H.E.A.T. guys have pulled one out of the bag, and even producer Tobias Lindell deserves a special mention.

Why write and submit 17 songs for an album when you can write 10 sticks of dynamite (well the 10th song is more of a force 10). Its a different H.E.A.T. to what you are used to, but once you embrace the difference, its all for the better.

Basically I can sum it up like this….if you thought that ‘Address The Nation’, or ‘Tearing Down The Walls’ were their creative peak, then you’re so wrong. This eclipses everything and it’s their most complete album to date. Going back to my physics and chemistry lessons, H.E.A.T. rises!

Tracklisting -
Bastard Of Society
Redefined
Shit City
Time On Our Side
Best Of The Broken
Eye Of The Storm
Blind Leads The Blind
We Rule
Do You Want It?
Into The Great Unknown