Empires Of Eden - Channelling The Infinite 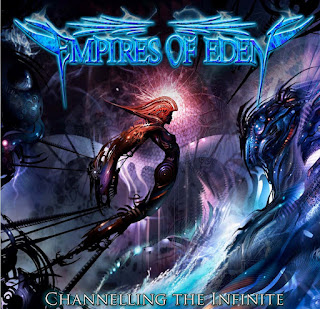 Conceived and orchestrated by Australian shredding maestro Stu Marshall (ex-Dungeon), the album features some of the most influential voices in metal. Loaded with 12 tracks of brain-blasting power metal, Channelling the Infinite features killer production and powerful, hook-laden music that will appeal to any aficionado. Each song is carefully crafted specifically to suit the singer involved, and designed to best complement their range and style. From there, the vocalists have complete freedom to write the lyrics and melodies, providing a unique insight into what truly inspires these artists.

In addition to the spectacular vocals, face-melting lead breaks and riffs that could take on a nuclear arsenal. Empires of Eden once again showcases the incredible cover art by L.A based “Alex Ruiz”

Producer Stu Marshall says, “I am overwhelmed by the power and emotion of the vocal performances that these amazing singers have brought to the album. It’s pushed my playing to levels I never thought possible and has created the most well-rounded release I have ever been involved with. Writing for these incredible artists is a dream come true and the finished product has actually exceeded my expectations. Every song is filled with a passion and spirit that immediately grabs the listener; I am very excited for people to hear this album.”

Basically Marshall has brought together ‘THE’ finest collection of power metal vocalists currently plying their trade in the 21st Century, and I’m mightily impressed at the muther fuckers ‘ little black phone book!’ Stu either has some excellent connections (most likely), or an even more excellent set of seedy negatives (sorry jpeg’s) on all vocalists concerned.

I used to think that I could sing many years ago, but after listening to likes of Bob ’Reach Out’ Rock I realised my career as the next rock god was never going to work. Rock has one of those unmistakeable wails that threaten your hearing and the foundations of your neighbourhood. When matched this with one of the finest metal guitarists around, your ears are in for a treat of the highest order (once the bleeding stops).

The biggest coup was getting UDO to play a part. Now I must admit, UDO’s never been my fave singer (so don’t shout or leave disparaging comments), but as the PR states, the songs have been crafted and tailored to each vocalist and ‘Hammer Down’ fits UDO like a leather studded metal glove!

Sean Peck (Cage) appears the most, on ‘Channelling The Infinite’, and the bonus track ‘Born A King’, and brings together a blend of Helloween and Onslaught at their finest. Italian power pocket rocket Alessandro Del Vecchio (Edge of Forever / Edens Curse and many other projects) appears on ‘Lions For Lambs’ and has proven over the past 12 months to be one of the hardest working and finest vocalists in rock – and he can do it live! Carlos Zema on ‘Cyborg’ has such a range to his vocals, at first I thought it was a duet! That’s sick dude! Vo Simpson tears the place up on ‘As Flames Scorch The Ground’ and is aptly named to match his range and Marshalls frenetic speed.

The last official track is the ‘Stars’ version of ‘Hammer Down’ with vocals being shared by UDO, Rob Rock, Sean Peck, Carlos Zema, Vo Simpson, Ronny Munroe, and is a great way to finish of proceedings.

To be honest with ya, I can’t find fault with any of the tracks on offer here, as all the vocalists brought in, excel to the max and it’s unfair to miss any of them out. Grats to all concerned.

A special mention for Marshall also, as he plays throughout as if his and his family’s life depends upon it. It’s a shred-fest of the highest order. I loved ‘Reborn In Fire’ and Marshall has only gone and bloody topped it.

My only regret is that there’s more chance of Elton John going straight than me getting to see this band of many vocalists in action. C’mon Stu, you can do it! 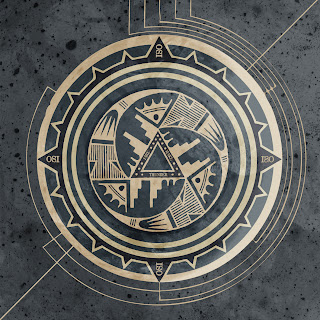 Fire Make Thunder marks the fourth undertaking for the collaborative duo known as OSI (Office of Strategic Influence). Formed in 2002 by Jim Matheos (Fates Warning, Arch/Matheos) and Kevin Moore (Chroma Key, former Dream Theater keyboardist), OSI is a long distance partnership, both musicians typically writing and recording alone and sending song ideas back and forth for further elaboration. Written and recorded throughout most of 2011, this latest release once again reflects the eclectic influences of both Matheos and Moore.

Returning as the band’s session drummer is Gavin Harrison of Porcupine Tree, this time co-writing one of the tracks with the band. All other instruments and programming were performed by both Matheos and Moore, while vocals and lyrics were handled exclusively by Moore.

All of the recording for Fire Make Thunder, with the exception of drums, was done by Moore and Matheos at each musician’s respective home studio with drums being recorded at Harrison’s home in London. Final overdubs as well as some additional writing/arranging was completed in July 2011 in Jamaica, Iowa, where the band mixed alongside engineer Matt Sepanic at Sound Farm Studio and Recording Environment. Mastering was handled by renowned engineer Roger Siebel. The record was produced by both Moore and Matheos.

And what an album this little beauty is! To be perfectly honest with you, if the previous 3 OSI releases rocked your little world, then Fire Make Thunder is tailor made for you. A heady blend of  Rock, Electronica and Progressive Metal, equal parts Dream Theater, Depeche Mode (I know it’s strange), and the likes of Porcupine Tree which all equates to one great big OSI experience. Kevin Moore isn’t the greatest singer. Heck, he probably isn’t the best singer in OSI, but his voice is a perfect fit for OSI’s hypnotic and rhythmic unique sound. This is probably my biggest and only gripe. I just want Moore to let rip a little (preferably a lot!). Jim Matheos has some great riffs laid down, but Moore’s laid back and relaxed vocal style doesn’t get past 2 on the Richter scale. Then again, this is my third OSI album so I really should know better by now. Despite the one gripe, it’s one I and hopefully most of you can live with. 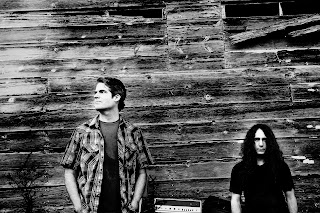 Fire Make Thunder is definitely an album that gets under your skin – in a good way! Broody, pulsating, intriguing, yet mellow and none more so than the opening track ‘Cold Call’ and is a song that typifies the OSI sound from the last 3 albums. The second track ‘Guards’ OSI switch it up a bit. In comes a drum loop, combined with a funky drum beat, and Matheos’ chunky and aggressive guitar riff. Overall is a quite dark affair, but each album sees OSI growing into a band, and not just two blokes with a bit of a side project. Even the slower songs have more going for them than previous, each song proving more enjoyable with each and every listen, what with the interplay between Moore’s delightful and multi layered synth, and Matheos’ guitar. Neither get in the way of each other, and there’s a mutual respect going on for each of their talents to blossom and shine through

OSI after some decent albums, have one in Fire Make Thunder that sticks its head above the parapet for some truly cracking moments. I guess it’s their finest yet!

See below my interview with the 80s legends that are Steel Panther.

We turned up at the venue,and as is the case, we weren't on the list. Thankfully Matt (tour manager) let us in once we started crying!

Anyway I went armed with some gifts, something I'd not seen done with guys previously, and the rest is comedy gold. I couldn't get a word in edgeways, so we just let the camera roll. Enjoy!

Me and Michael Starr & Satchel with their gifts!! 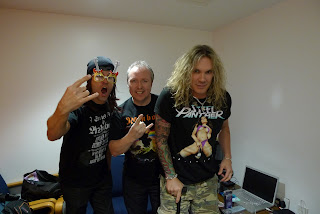 Harry (my son) was on camera duty, so he took in his guitar on the off chance and they were more than happy to sign it with some pretty vulgar stuff!! 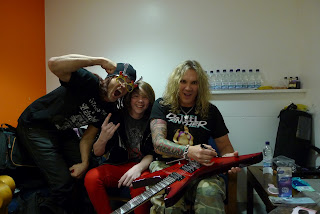