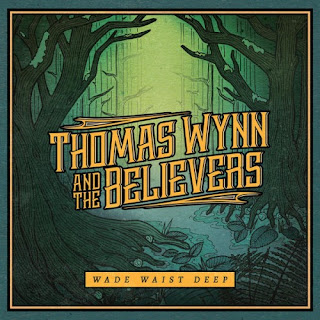 Every now and then, a band comes along from out of the blue that makes you smile, makes you sit up and notice, or just makes reviewing an absolute dream for all those times that make an average album difficult to write about. It’s also an album worthy of reviewing months after its release, as I hope new fans will find them just as I have only this week.

Great music is easily reviewed, average isn’t. Words can pour out with platitudes easily. If it weren’t for a gig this week watching The Temperance Movement, I very much doubt that Thomas Wynn & The Believers and me would have crossed paths….ever! I’m very much pleased that our paths crossed.

Here I am, witnessing a band, three albums into their carrier. I can’t tell you much about their previous albums, as I’ve not got them. Their performance at The Ritz Manchester was nothing short of stunning. It was pure Rock & Roll, Southern rock, with Blues and Gospel thrown in for good measure. If church were like this, I’d be there every week!

So what of the album? Does it cut the mustard?  Well, yes it does. Because if you can perform like likes guys can live, then the songs are the foundation. The band is basically set up around Thomas Wynn (Vocals, Guitar), and his sister Olivia (Vocals, Tambo). It does not stop there. There is Dave Wagner (Bass), Ryan Miranda (Drums), Colin Fei (Keys), and last, but by no means least, Chris ‘Bell’ Antemesaris (Harmonica). This guy plays his harmonica like a lead guitarist, I shit you not!

When all of ‘this’ comes together, Thomas Wynn & The Believers makes for one very pleasing listen. Thomas provides most of the lead vocals, but to suggest Olivia is anything less than a lead vocalist herself is wrong. Her vocals complement and ride along with Thomas’s in perfect harmony. It’s layered, explosive, and just great. The opening three songs are a mix of styles, - ‘Man Out Of Time’ has its roots steeped in the Blues, whilst ‘Wade Waist Deep’ is every inch Southern gospel, and ‘Heartbreak Alley’ is country. Thomas Wade & The Believers don’t care if you want them to pick a style, they are comfortable any way they want to go. So far it’s all excellent.

‘I Don’t Regret’ is a moving performance, and ‘I Don’t Regret’ features some fantastic vocals and is one of the highlights of Wade Waist Deep. The chorus pounds along with the bass and drums, with the Hammond whistling along subtlety in the distance, whilst the Wynn’s provide the spark and fire. Sandwiched between these is ‘Thin Love’, a perky little song that gets close to a pop song, as they are likely to get. ‘You Can’t Hurt Me’ is a harder rocking song based around the Hammond, with a classic rock chorus. It’s a song set in the late 60’ s from bands like Cream and Blind Faith. Throw in the fuzzed up harmonica and its like listening to Hendrix jamming along for good measure. ‘Mountain Fog’ doesn’t get out of third gear, but….it doesn’t have to. It’s potent enough as it is. ‘Burn As One’ is a showcase for their Southern Rock roots and vocally its like Ann Wilson has joined in for added oomph! It an up-tempo rocker that fizzes along.

‘Feel The Good’ fits alongside ‘Thin Love’ in its composition. ‘We Could All Die Screaming’ sets its stall out right from the first few bars – a decent heavy rocker with it’s John Lord influenced organ, and its brooding, dark guitar riff.

The last song on the album is just simply one of the best rock songs I’ve heard. TW&TB throw everything at it. It reminds me of Bigelf, Skynyrd, and Deep Purple all rolled into one great performance.  It starts off slowly, maintains this pace of not going anywhere until the mid point, then, ‘Wham!’ The bass riff is like Kiss’ ‘Detroit Rock City’ and it’s off into heavy rock/prog territory. In the 70s this was the kind of song a band could easily get 15-20 minutes out of. They ended with this at their recent gig, and I had no idea where the song was going – it just picks you up and carries you off before putting you the mixer and spitting you out, muttering ‘WTF just happened!’

Plaudits are most likely directed at Thomas and Olivia, but every single person in the bands comes together and makes their mark for what is a truly great performance.

I now have another reason to visit Florida other than going to Disney!