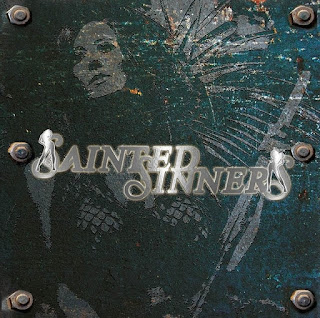 “The idea first started with me thinking about forming a band where I can follow my natural taste of music without compromises. I was writing music and then basically formed the band around who would fit the direction it was going”, remembers Pané, whose first step was to contact his former band mate Reece.  “Being one of my all-time favourite singers, he was my obvious choice. It just clicked immediately and so we agreed to lead the band together as we trust and respect each other.”

My own dalliance with Reece only is a ‘toe dip’ into his back catalogue with Reece Kronlund, and for me in particular, one of the highlights of the early 90’s, Bangalore Choir’s debut. Now then, if your idea of ‘rock’ is served with a huge slice of ‘classic’, then you need look no further than Sainted Sinners. If you’re of a certain age then the sound of a Hammond will make parts of your anatomy tingle like they used to in the 70s and 80s. I’m a sucker for a Hammond organ (oo-er! F’narr!) and SS has it in bleedin’ abundance. That much so, it should have its own credit in the sleeve notes.

For ‘Knight Of The Long Knives’ the Hammond is right up in the front of the mix, placing their classic rock intentions firmly in front. Its duels with Pané’s guitar as did the greats of old (Blackmore/Lord). Throw in Recces vocals that are a bit more lived in than I first heard, but are still highly effective for this king of style, and it’s in your face, unadulterated ROCK! ‘Beauty In The Beast’ is a fast paced

On times Reece comes over all David Coverdale, and that is not a bad sound. I mean the 70s Coverdale, not the current millennia Bee-Gees version, none more so than on ‘Maybe She’s Got Balls’. It’s even written in the old skool (now almost defunct) Coverdale style.  ‘We Are All Sainted Sinners’ is more blues tinged than its predecessors that goes for the ‘anthem’ effect. My outright favourite is the next song, ‘Blue Lightning Man’. Nudging the best part of seven minutes, it incorporated steel guitar before a Blackmore-esque ‘Kill The King’ inspired song kicks into high gear where organ and guitar trade licks for fun. ‘This Love That I Have Found’ clearly shows Sainted Sinners love of all things Led Zeppelin, from the Kashmir inspired riffage to the Cov/Page collaboration. ‘Did You’ takes me back to my favourite Deep Purple glory days of the ‘Burn’ era. Its just builds and builds to this great crescendo. ‘In Need’ is like a song that VH would have done around the ‘W&CF’ era – its part Take Your Whiskey Home’, part Southern rawk! What’s a classic rock album without a song title with a woman’s name? Nothing I tell ya! It lives up to the legacy of the past – April,  Cherie, Angeline, Luanne, etc. The album finishes with the equally powerful double barrels of ‘Shine Diamond Girl’ and ‘Truth Is A Lie’

Recce, Pané, Doernberg, Burkert and Hirleman have clearly struck gold here. Their love of all things classic has come to the fore in one belting little diamond of an album. They all have their both feet planted in their love for the classics -from Purple to Zeppelin, and from Rainbow to Whitesnake – its all done with an admiration of the great era of the past, than a blatant plagiarism, all with a modern twist. I don’t know why, but I just wasn’t expecting this to be so damn good!!