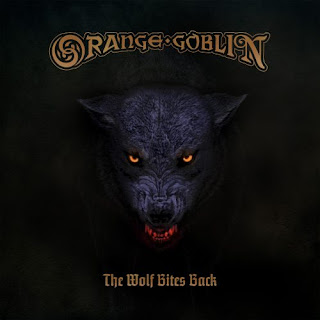 Orange Goblin – The Wolf Bites Back

Orange Goblin have been holed up at Orgone Studios with producer Jaime Gomez Arellano (Ghost, Grave Pleasures, Paradise Lost, Cathedral) to create their latest opus, titled The Wolf Bites Back. The resulting nine track album will be the band's ninth studio release and will be released via Candlelight/ Spinefarm Records worldwide on 15th June. Jesus, nine albums, and this is my first experience of the Orange Goblin. Despite going to shit loads of gigs every year, our paths have never crossed, and I’ve never gone looking for them….unfortunately. This is their debut for renowned label Spinefarm, and I guess they have been building up to this level and their moment that is fully deserved.

Vocalist, Ben Ward, commented:
"We are very excited about this new album. The Wolf Bites Back is our strongest and most diverse collection of songs to date, it’s certainly a lot darker both musically and lyrically. It is still definitely a distinct ORANGE GOBLIN album but we have incorporated a lot more variation on this record and there are hints of Can, Captain Beyond, Wishbone Ash and The Stooges nestling amongst the obvious Sabbath and Motorhead influences. Lyrically I have explored everything from alien serial killers to zombie biker gangs, Buddhist warriors through to descendants of the Salem witches!

"There was definitely a concerted effort to make sure all the songs could work in a live environment which gives the album a more raw, stripped back feel - something that I feel has been lacking from good rock and metal in recent years. Working with Jaime Gomez Arellano was really productive and a great experience, especially going back to tracking stuff to tape. I feel that he got the best out of all of us as musicians and songwriters and that really comes across in the songs, there is an air of confidence and experience. It was also a real honour for us to have Phil Campbell of Motorhead lending his hand to a couple of solos on there too!"

What can I say. If you’re a newcomer, then this is some seriously heavy shit! If you’re nine albums in, I’m guessing its tried and tested and you’re in it for the long haul. What immediately gets to me is the seriously heavy riffage, powerful, doom laden, with a bit of Sabbath thrown in for ‘Sons Of Salem’. More like Sons of Sabbath if you like. Ben Wards vocals are more on the growling side and the opener is the Ronseal style, its written on their sleeve and does what it says on the tin. ‘The Wolf Bites back’ takes me a bit by surprise as I wasn’t expecting a lilting beginning, but then….pow, in comes the guitars and we’re off again! It’s a fucking great track if I am honest – a cracking groove driven track. Coming from a diet of Classic Rock and AOR, Ward isn’t the best singer I’ve heard, but its all about attitude and style, and his vocals fit the music perfectly. ‘Renegade’ (not a Styx cover) again, grabs you to the throat and wrestles you to the ground. If you have a Motorhead sized hole in your life, then look no further than Renegade as it has Lemmy and Campbell running through it like a stick of rock. ‘Swords Of Fire’ kicks of with an extended bass riff, a bit too long at over half the song, before its back to some early Sabbath drum pounding, before letting go. It’s the weakest song for me so far, but that’s not necessarily a bad point. The others have been so good.

‘Ghosts Of The Primitives’ has a bit more class up its sleeve and is a but bluesy than anything so far. Its proper head-banging stuff, is this, before falling, rising, and again falling and segueing to the instrumental ‘In Bocca Al Lupo’ and serves as a welcome break and allows the ears to reset. Of course the rest isn’t and cannot be sustained, as ‘Suicide Division’ (a ballad, of course it isn’t a ballad!) out Motorhead’s Motorhead, for a couple of minutes of pure neck snapping metal, brutal. ‘The Stranger’ looks as if its about a killer. The lyrics are given extra menace as they are pretty much spoken and shouted by Ward, even as the track builds. ‘Burn The Ships’ sees the guys going back to the beginning of the album in style and substance. If Ward has never been in a Motorhead tribute band before then why not!? A voice as close to Lemmy’s as I’ve ever heard. Finally its onto ‘Zeitgeist’ and it’s a point that just sums up the whole of this album and the band themselves, its pulsating riffs, headbanging and horns, with some great guitar work  (dare I say Lizzy-esque) and driving rhythm. A great song to finish ‘The Wolf Bites Back’.

Orange Goblin certainly have the claws, bite, and wolf roar to make them stand out in the crowd. After 20 years, its their time in the sun, but I should say moon!

Whilst I’ve never been a fan, (up until now – how can you if you haven’t heard them) I cant wait to see this band live as I expect they would be explosive. I don’t know about any of the previous eight albums, but number nine is a perfect place to start.

The most times I’ve written Motorhead without reviewing a Motorhead album.