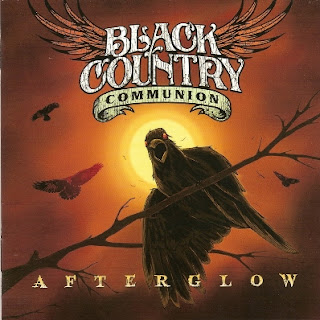 Well there may well we trouble a t’mill within the Country of Black Communion, but I can tell you all from the very first listen, that there is absolutely bugger all wrong with the music being turned out. When me ‘n No.1 son were down in ‘dat dare London’ the other week for the marvellous  ‘50 years of Loud – Marshall’ gig, a bit of a rift was opening within Twitter between Hughes and Bonamassa (who is probably the only person of the planet whose output is more prolific than BCC), and in the weeks that have passed, time has proven not to be a healer with a one off UK gig being arranged and swiftly cancelled, with Bonamassa stating that ‘’principle still stands for something in 2012. I’m ready to move on’’, with a swift response of ‘’Me, too!’’ from Glenn Hughes. Phew!

Apparently the songs on Afterglow were going to be for Hughes’ next solo album, and frustrated that they couldn’t really get together as a unit, the songs became the next BCC ones for Afterglow. That doesn’t mean a step in the wrong direction for lovers of the previous two releases. Far from it, to be precise. Whereas Hughes has been the undoubted king of funk these past years, Afterglow ‘s songs are planted firmly in the Classic Rock genre of the 70s, only with better production!

Whereas BCC1 seemed like a quick get together (but the songs still kicked serious ass), BCC2 was a more of a band affair with the songs having a much better flow and cohesion, Afterglow comes at you like a runaway train with 1000W of Marshall/Orange Cabinets strapped to the front. Which leads very nicely into Big Train, and for me is one of the best tracks to come from the pen (or keyboard) from Hughes, fuelled not by coal, but by Bonham’s drumming, and a great bluesy solo from Bonamassa.

The plan this time round was to give Sherinian more keyboard time, and this is more prominent on the 70s influenced ‘This Is Your Time’. ‘Midnight Sun’ sees Bonamassa give a very Pete Townshend /The Who feel to proceedings, with Hughes being Hughes and just singing his Wolverhamton ass off! On ‘Confessor’ the sound goes back to BCC1, mean, lean, a Black Country fighting machine.  On ‘Cry Freedom’ equal vocal time is given between Hughes and Bonamassa and the end result takes me back to the first time I heard Deep Purples Burn album. A sledgehammer of a blues rock number, with both singers fighting it out for blues supremacy rights! Even Bonamassa goes all Hughes on us.

The lighters come out for the slowed down title track, and is an instantly memorable number, with Hughes’ voice taking centre stage going from soft and subtle vocals to powerful and screaming, then pastoral to full on heavy hock in a little over a heartbeat. Very Zeppelin-esque. Bonham’s drumming drives ‘Dandelion’ forward, and ‘The Circle’ is a more tranquil affair, atmospheric and haunting, with a riff straight from Bad Company’s finest. Rush have just been on the phone, and they want the opening riff to ‘Common Man’ back! ‘The Giver’ harks back to the DP Burn Stormbringer era, and the final track ‘Crawl’, gets all manner of genres thrown in with the proverbial kitchen sink. Funk, rock, blues, 70s rock, Puprle, Led Zep all in this electric blender of a song. Sherinians eastern sounding keys even take me back to my youth with a Rainbow (Tarot Woman/Stargazer) vibe running through the song like a 70s stick of Rock!!!

After 3 albums in quick succession, and the recent and hopefully not terminal fall out between Hughes and Bonamassa, it would be criminal if they didn’t sort out differences and gave us a tour in the not too distant future. Even if there’s no tour, please give us more albums. It would be a shame to bow out after three, but if this is their last album, fuck me it’s a good ‘un!!