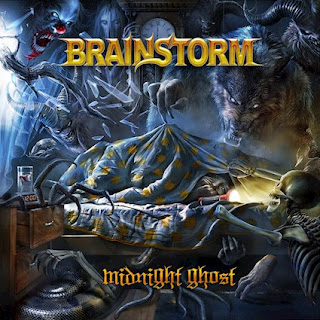 The chain of circumstantial evidence is long and speaks for itself: Brainstorm’s new album, Midnight Ghost, is a veritable milestone. There are plenty of reasons for this, starting with the initial compilation of ideas through the meticulous development of the song arrangements and concentrated production at Sebastian ‘Seeb’ Levermann’s (Orden Ogan) Greenman Studios to the atmospheric cover artwork courtesy of Gyula Havancsak (Accept, Stratovarius). All the cogs have obviously meshed and produced a result that’s bound to delight all power metal fans and has even surprised the five band members themselves. “It’s pretty unusual that musicians still get shivers down their spines when they listen to the new material after a long and energy-sapping production. In this case we can really say that all Brainstorm musicians are total fans of our new recording,” says vocalist Andy B. Franck, adding: “Midnight Ghost is the album we want to be measured by in the future.”

Are there special reasons for this creative avalanche that was kicked off almost two years ago and has now culminated in ten new songs?

I’m asking myself the above question whilst listening to what I thought was a pretty poor opener in ‘Devil’s Eye’. A potentially good song seems to be drowned by the relentless double bass drums. But the disappointment didn’t last long as we hit into ‘Revealing The Darkness’, which again starts with the double bass drum, but soon turns into a very nice verse with some great guitar licking, together with a killer bridge. Proper metal this, with hints of Accept thrown in for good measure.

If you’re into your melodic / hard metal then this album will be for you. I do feel like these guys are stuck a little in the 80’s which admittedly isn’t a bad thing I suppose, just not quite for me. Some people move on, some don’t. There’s no right or wrong in that whatsoever. As we reach ‘Jeanne Boulet 1764’, which starts in a very Tenacious D way, we are treated to a far more in-depth effort of what this band can do. A dark, melodic, synth filled anthem which is by far the best effort on this album so far.I’m loving the start of ‘Divine Inner Ghost’ with it’s driving riff, a great verse to the song but unfortunately it doesn’t last long when the chorus kicks in. I’m finding the chorus here all seem to be a bit too melodic for me. We’ve got good openings to tracks and verses and then we are let down by the chorus.

Overall a good album for the metalheads out there. Me personally, I prefer a little more diversity but I’ve heard a lot worse.