Now it’s not very often that your breath gets taken away by a support act. Usually nowadays the support acts are pared to great effect with the support, but in this case and after a brief 40minute dalliance with these German (and young) progsters, you can tell that they are destined for much greater things

Musically they are a bit eclectic to say the least, but to describe them is almost like saying which one of your 2 kids is your favourite (they know which one is my favourite!). Think Meat Loaf, crossed with Jethro Tull, crossed with Queen, and we may be getting somewhere close

Also, NEVER judge a book by its cover as the guys merch stand had CDs on offer (review to follow) and they look like the bastard offspring of (pick any two from) Jim Henson's Muppets and a Tim Burton Movie, or possibly Rocky Horror and Robert Smith (Cure), and you're still only half way there! And they sounded (obviously) nothing like I was expecting

I don’t blame the audience at the start as it was only 150 people (ish), so they were never going to get a thunderous welcome. Cryptex were in Bilston to put on a show, no matter how small or quiet the audience. Come the end, they definitely won a few new fans. 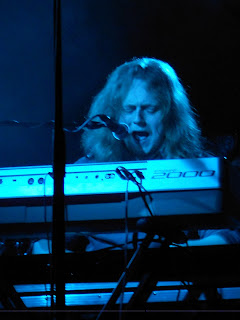 ‘Cryptex’ is basically one of the hottest bands to come out of Germany, and the driving force behind them is Noddy Holder lookalike Simon Moskon (Keys/piano, bluesharp, harmonica, bass, and even didgeridoo!!), and he confidently holds the keys (and tambourine) to their future success

They basically came, saw and conquered. Opening with the delightful 'Hicksville, Habitus and Itchy Feet', ‘Cryptex’ set their plans for domination. ‘Freeride’ was a song straight out of a dark Burton-esque Broadway musical. ‘Cryptex’ are a quite superb 3 piece with wonderous harmonies - just check out Dance of the Strange Folk’. Apparently 12 months ago neither Ramon Heig (Drums & Cajón) or Martin Linke (Guitars, Sansula) sung a note. They harmonised as if they’ve been at it for years, this is where the Queen influence can be heard the most. When the guys take it up a notch for the powerful Camden Town, its an all out Rock assault. ‘Alois’ is where ‘Cryptex’ shone the most, stripped down and full of power and emotion. Linke riffed on the children’s glockenspiel before swapping for the acoustic on ‘Its Mine’, and shows what a powerful tool Moskon’s voice really is, and whips out the harmonica to finish off the song, before surprising the now fully entertained audience with his didgeridoo (a first for many of the prog audience I’m certain). 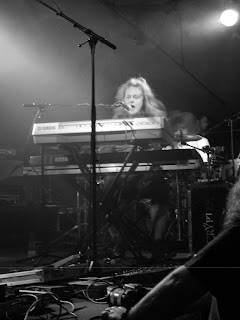 The talent was in abundance, with Heig keeping the beat on his Cajón (oo-er!)for ‘Gypsy’s Lullaby’. ‘Cryptex’ finished the latter part of their set strongly (not that any of it was weak I must add) with the heavy ‘Most Lovable Monster’, the thunderous ‘Leviathan’ and finally their ‘Outro’ from their album

‘Cryptex’s’ music can be a bit all over the place, but with this gig supporting songs from their debut ‘Good Morning, How Did You Live’ it all makes for a varied and superb gig. Symphonic, pompous, 70s infused classic rock of the highest order. I didn’t mention the link to the DaVinci Code once! Dammit!