The Crave - Breaking The Silence 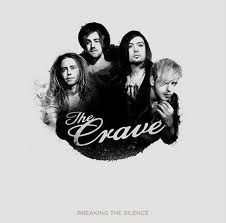 I don’t really wish to repeat myself, but here goes. It makes a (very) pleasant change, when every once in a while, you get your little mitts on a cd, (or in this increasing digital age, the potential for a lower grade download of an album – I have the cd thankfully!), that makes you sit up and listen. And restores your faith in rock music!
The guys from Brighton have learnt one hell of a lot over the last 18 months. Impressive support slots with Shinedown, Hot Leg, Deep Purple, Theory of a Deadman, Sonisphere, Quo, Buckcherry, Download, Rock AM, have proven to be their making. So far, so good. Has there been an improvement on the very impressive debut, ‘Anywhere to Everywhere’. The answer is a resounding YES!
The band comprises of Ryan Burnett - Vox, Guitar, Carlos Garcia - Guitar, Tom Swann - Bass, and CJ Evans - Drums. All the 12 songs are written by The Crave, and once again they dont stray far from the winning formula of their last album. Only this time its tighter, with a right blend, of rockers, anthemic tracks, with a couple of slower, stripped down numbers to mix it up a bit
The Crave make US Radio friendly music, end of. Golden Nuggets of huge riffs, with even huger choruses that more experienced, older, and wiser bands would outright kill their nearest and dearest for.  The Crave are just waiting to be plucked from the river of partial obscurity into the keep net of stadium mega-stardom. They have a nice balance of rockers, acoustic, and ballads to keep many a fan extremely happy
The Crave have the power and quality in their songs to take on any of their contemporaries in an all out fight to the death. Opener ‘Cooking In The Kitchen’ has their style written all over it. No doubt a choice for first single (as are many with a bit of luck), it’s a ballsy rocker with a Slash/Cult underlying riff. ‘Something Beautiful’ gives more than a passing nod to a more 80’s classic rock sound. Title track ‘Breaking The Silence’ is a no doubt is waiting to be picked up by a major US network for your typical ‘Jersey Shore’ bollox to give the said show a bit more clout! ‘Surrender and Retreat’ is a slower ballad and takes the weight off the other higher tempo numbers. On ‘Maverick’ Garcia pays homage to The Police’s ‘Message in a Bottle’. ‘The excellent ‘Spinning Wheel’ is a beautiful acoustic number just itching to be played live every night I suspect on their upcoming tour. ‘Silently Screaming’ is without doubt the best track on the album, building to a powerful crescendo, and is one of their best songs to date. ‘High’ reminds me of a great US band that very few will probably have come across in the UK,  the very melodic and excellent Flickerstick
The only criticism I have ( it has nowt to do with the music) is the poor choice of album cover. You get no sense of what music the band are peddling. I’m with Steven Wilson of Porcupine Tree on this subject. I want a return to wonderful, artistic album covers of old. I’m in the minority when most people are happy to see a stamp sized cover on their ipod/mp3 player.
Despite my gripe, this is still one of the best albums you are likely to hear in 2011, and its still only Feb. It’s an improvement on the debut, the lads have definitely grown as a band.  BUT,  I’m confident The Crave have what it takes to be huge. Now go out there and prove me right
9/10
Posted by aorwxm at 15:40