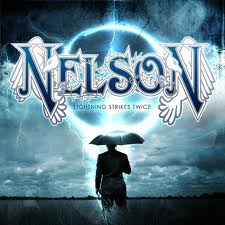 Nelsons return to the melodic rock genre has been a while in the making. Absent for the last 10 yrs in album terms, they like many others before and after them are blazing a trail to reformation and the goodies it can bring, especially from the still lucrative Japanese market. This is the second major release from Frontiers along with their stable mates from the 80s, Mr.Big (see separate review). AOR/Melodic Rock is definitely in the ascendency. Over the last couple of years this genre of music has probably been in the mainstream as ever it was in its heyday, only this time without the support of many major record labels.
But does the album title live up to its suggestion.  Does lightning strike twice? Can Matthew & Gunnar make a comeback worthy of the triple platinum selling album way back in 1990 that gave them a number one it with ‘’(Can’t Live Without Your) Love And Affection”?
Unfortunately when a band has had major success (especially with a debut), a new release will always be compared to its bigger, older and better looking sibling. Like Queensryche will always be compared to ‘’Operation Mindcrime’’, Nelson will always have ‘’After The Rain’’ to contend with. On the evidence of ‘’Lightening Strikes Twice’’ I can comfortably state for the record that this is a close runner to ‘’ATR’’ and would have been a great second album bringing all the trappings of mega-stardom. As it stands now, they have two great bookends with a handful of solid albums in the middle.
Opener, ‘’Call Me’’, and no doubt, and no brainer for a first single is about as good as it gets for the blonde maned twosome. Catchy as anything that was on their debut, it stands alongside some of their best work, just like they had never been away.  From here on in it gets quite interesting as Nelson seemed to have morphed into a modern day Bon Jovi, with added backing vocals courtesy of some mighty fine ladies, only much better than the pap that Mr Jon Bon has been churning out these past few albums.
‘’Ready, Willing and Able’’ is another belter out of the book of aor by numbers, great harmonies, hooks and chorus to die for, topped off with some cool guitar work. ‘’You’re All I Need’’ was their first video to be released in about fifteen years, and was a deserved choice. Ballad ‘’To Get Back To You’’ will have a certain Mr JBJ shitting bricks, he hasn’t written as song as good as this in donkeys!!
The quality comes thick and fast with ‘’When You’re Gone’’. It blatantly takes a small part of the melody on the opening line of each verse from Van Halen’s ‘’Jump’’. The class doesn’t falter for a single second. As far as comebacks go, Nelson’s is mightily impressive, and it gets better with each and every listen.
So..... Fed up with the recent dirge that has passed under the name of Bon Jovi? Don’t waste your time spending £70 this summer, go out and buy ‘’Lightning Strikes Twice’’ and enjoy some of the best melodic rock to hit the stores in years. Jon Bon has earned enough over the years, it’s time to spread some of the wealth around to a couple of blokes who fully deserve another shot in the limelight
9.7/10
Posted by aorwxm at 16:04