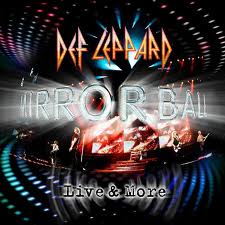 So, hot on the heels of headlining Download, the Leps (Def Hoople, or Mott the Leppard as they now seem to be known) release this, a mix of live tracks recorded from their ‘The Sparkle Lounge Tour’ plus 3 new studio tracks and a bonus DVD containing live performances and backstage footage
There is no doubting the legacy of tracks on this album that they have given the rock world. The first British band in the 80’s and NWOBHM band to really have a go and crack the US and succeed big time, they are only one of five rock bands to have two consecutive 10 million plus selling albums (guess the other four, answer at the end of the review)
From a band that have experiences great highs, and some terrible lows that other bands would not recover from, Leppard still remain a live force to be reckoned with. Yeah, they have not had the success since Hysteria, and the 90’s and noughties haven’t brought much success, although the ‘Sparkle’ album was as good as it’s got for Leppard since Hysteria. Let’s face it, the days have pretty much gone where an artiste can shift 5 million, never mind 10 million albums
I wasn’t exactly excited in wanting to review this. I witnessed Leppard on the double headed Whitesnake tour a few years ago,  and I honestly thought that whilst Leppard played as well as ever, Joe Elliott was struggling with a demanding wailing set. Have no fears the fella is certainly back on form for Mirror Ball (pro tools?)
Whilst recent remasters series have included a live bonus cd, this is officially Leppard’s first live album, so expect the next one sometime late 2042
Basically the album is pretty much a ‘Greatest Hits – Live!’ compilation mostly taken from Leppard’s golden period (High ‘n Dry / Pyromania / Hysteria/Adrenalize). Despite Elliot’ts reticence towards On Through The Night, it would have been nice for them to include Wasted and/or Hello America as I feel they are important songs in the Leppard back catalogue. 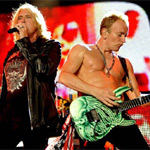 Musically, Leppard are tight as a nut, and vocally, it’s the best I have heard Joe Elliott sing in the last 4 years. Perhaps I caught him on an off day…twice! Bur fair do’s I wish I could sing like Elliott any day of the week, but if I do have a grip, it’s that he struggles a teensy bit in his upper register, but not that much that it ruins proceedings. It’s just that I prefer to hear him (and remember him )as I did on the Hysteria tour all those years ago
I almost feel that Def Leppard have drawn a line under a 15 year period by not covering anything from 92-2007. I suppose they cant play everything, and there will always be pissing some fans off by missing their fave tunes – then again most people of my age only want to hear 1980-85 Leppard
As a live album, there are better ones, but as a reminder of Blighty’s best ever exports Leppard fans will love it.
Def Leppard, at the forefront of NWOBHM, and a Bloody British institution!
Answer to the trivia quiz = (so popular, you know them by their 2nd names, Beatles, Zep, Floyd and Halen!) 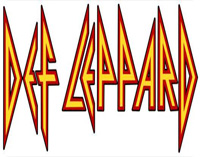