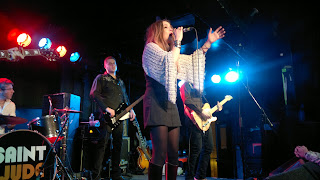 Well I have to admit that I have more than a soft spot for female singers, especially rock singers. Pat Benatar, Leigh Matty, Ann Wilson, Amanda Marshall, Grace Potter, Sarah McLachlan, Sam Brown -  and now I have found someone who does not look amiss at all amongst this company, the very impressive (and very gorgeous) Lynne Jackaman.

Imagine if Joe Cocker and Janis Joplin got it on and had a love child, well Jackaman would certainly be it! The type of beauty that you’d walk away from your missus just to spend a night with, but with a voice given by the rock (and Soul) Gods!

Yes, Jackaman is drop dead gorgeous. Yes, she has one of the finest voices I’ve ever heard, but these two (hot properties) don’t cut it if you haven’t got the quality of songs to back it all up, and thankfully Saint Jude have some pretty decent tunes to call upon.

It’s great when you get bands (so young) like Saint Jude and Rival Sons, who proudly have set their styles in the Classic 70s era (think Stones/Faces/Bad Company)  and make no apologies for doing it their way.

Apart from my lad  (16) I doubt there were many around me (apart from one or two) that were below the 35-49 age bracket, which tells you exactly the type of crowd that they are pulling in, the 70s Classic Rock fan. 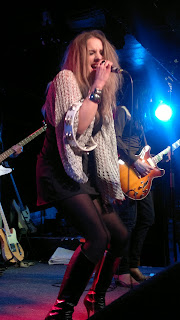 Saint Jude made a pretty clever move recently, in giving away their current album with Classic Rock. There’s no point in trying to shift an album for a tenner when you can give it away to tens of thousands in a mag. The upshot of which was a pretty decent turnout, which otherwise might not have been the case

Opening with ‘Little Queen’, was played like a band with hundreds of gigs under their belt, assured and professional. The excellent ‘Garden of Eden’ followed, and sums up exactly what Saint Jude are about – bluesy, soulful  and instantly addictive. ‘Leave a Light’ reminded me a little of ‘Northwinds’ era Coverdale (before he went all MTV and Harmony Hairspray on us). The two best songs which highlighted the ‘Diary Of A Soul Fiend’ album were the stunning vocals on ‘Angel’ and passionate ‘Down and Out’. It all felt a bit religious to be honest. I nearly shouted ‘Hell Yeah’ at one point. When Jackaman sings ‘’hold out your hand / let me lead you astray / close both your eyes / I will show you the way’’ I for one was up for anything at this point. 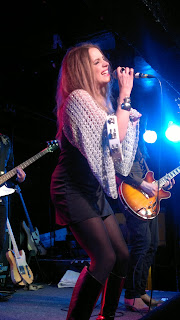 The two new sons ‘Black Rum and White Lies’ and ‘Layhee’ prove that the dreaded ‘second album syndrome’ will not be a problem for Saint Jude. The former being a blend of the Stones and Faces and was one of the heaviest songs of the set

‘Soul On Fire’ probably the bands most heard track by the audience went down a storm, before they came back for their ‘Southern Belle’ encore. Such was the response at the end, they came out for what seemed like an unplanned second encore for the excellent ‘I’m Losing You’ 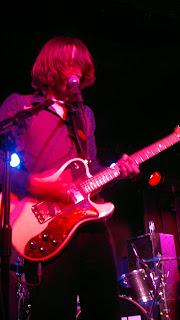 With only one album under the belt it was all over fairly quickly, but what mattered was the quality of the performance. If I have any doubts, it’s not about the music at all, but I’d have liked a little more interaction with the audience. Hardly any of the songs were introduced and there was little banter. This will come I’m sure of it.  Musically, considering it was the first night of the tour, their souls were on fire!

Judging by the new songs, I expect that the success that Saint Jude crave (and deserve) is just around the corner. 2012 to be precise


Little Queen
Garden Of Eden
Pleased To Meet You
Leave A Light
Sweet Melody
Angel
Down And Out
In My Head
Black Rum And White Lies
Layhee
Parallel Life
Soul On Fire
Southern Belles
I'm Losing You
Posted by aorwxm at 18:34