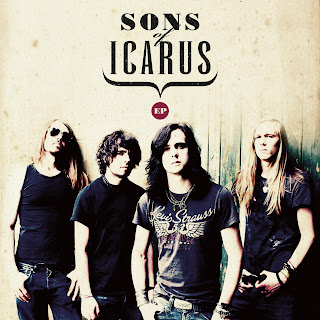 After seeing these guys play a pretty mighty set supporting Rival Sons recently, I wanted to review their up-coming EP, out in December. My lad Harry was so taken by it, he wanted to review it himself. See his debut review....

After winning “Marshall amplifiers ultimate band contest” by fighting their way through hundreds of bands and getting a label, they have done extremely well to start supporting some of the names some people are more familiar with, such as Rival sons, Black Spiders and Black Stone Cherry, which  will definitely help the band with getting a lot more of their own followers. Marry this with their new 4 track EP and they are on track to do exactly that.
Starting off the EP is a track called “You Want It All” and it kicks off with a great riff and some great small solos going on over the verse and chorus. I don’t think there is anything bad to say about the guitar work, going from the simple but great riffs to the sweeping solos and the great bends and slide over the chorus and verse patter without over doing it like most people would. The vocals are  strong and fit perfectly with the guitar line but giving it a lot more power.  I personal think there should be a bit more of a bridge between the verse and chorus but they have still pulled it off. (can some one please turn up the bass as  the only time you can hear it clearly is when the music goes quite). The drums are faultless, not overplaying and doesn’t go mental with the most ridiculous time signature and keeps it all together with a powerful punch.
My personal favourite on the EP “Not Myself” has a really good up tempo pace to it and has a nippy quick riff and has a great simple verse letting the vocals really shine through.  The solo has a really great funky sound, especially when the ‘wah wah’ pedal is brought out and the beat in the background fits perfectly with the funky tune.

“Cant let Go” has another really solid ‘bang your head’ riff and some really nice small fills in the verse but quietens down to bring the vocals through to shine. The pre chorus is brilliant because the chords are longer but give more of a kick when the guitar has a bit of a run down which should be brought out more. The guitar never has a weak part in the song it flawless and always has a punch. After the second chorus everything goes quiet to show us that the vocals have control and then kick back in with a great beat and riff
When I heard “Sick to the Teeth” it starts off a lot mellower from their other songs but still sounds just as great with the bass coming through which should happen a lot more. The quiet start definitely helps the bass come through to its full affect. It then builds up to a crescendo and takes the song forward. There is a part where you think the song will end but then picks up again. Yet again SoI give us yet another great riff and pretty tidy drum fill to complement. The solo isn’t over done and is just perfect to fit over the chorus and is very affective

I would say over all I cant find anything wrong with this EP and I think that we should expect great things from Sons of Icarus and everyone should look out for them because these guys should go far.
Score 85 /100
Tracks –
1. You Want It All
2. Not Myself
3. Can’t Let Go
4. Sick to the Teeth
Website – www.sonsoficarus.com

I had the pleasure the other week of witnessing Sons of Icarus supporting Rival Sons at the intimate Manchester Academy 3 the other week. To say they won over the audience was an understatement and then some. After winning “Marshall amplifiers ultimate band contest” by fighting their way through hundreds of bands and getting major management representation, which in turn has led to some pretty decent opening slots for the likes of Rival sons, Black Spiders and Black Stone Cherry, which  will definitely help the band with getting a lot more of their own followers. Couple this fact with their storming new EP and many more followers will be attained.  Good thing is, they are 100% British. Originally named The Fury they have honed their sound into a heavy rock assault on the lug’oles courtesy of some of heaviest riffs this side of Tony Iommis moustache!
Starting off the EP is a track called “You Want It All” and it kicks off with a heavy as fuck riff reminiscent of some great UK classic rock luminaries, and will have the current batch of rivals shitting themselves.  Andy Masson’s vocals complement Balkwill’s riffs perfectly. As my lad stated elsewhere ‘’turn up the bass!’’ The drumming is not overplayed at all and keeps when all combined, the result is a dynamite track. The 7 minutes just fly buy, which is always a great sign
“Not Myself” has a really good up tempo pace to it and is something that the likes of Black Country Communion would kill for. “Cant let Go” again has (to quote Quiet Riot) a solid ‘bang your head’ riff and although not the best of the three so far, it still pretty much kicks. Finally all too quickly we’re onto the last track “Sick to the Teeth”. It doesn’t have the mega riff start like the others, but builds its crescendo to prove that they are not all music by numbers (This isn’t a derogatory comment, SoI have a formula and play to its strength). For such a young bunch (average age under 22!) of lads they play with the experience and talent that belies their young ages
After a recent review for Voodoo Six, Sons of Icarus are also contenders for being the future of British rock/metal and they have no need to be afraid of anyone as they will go very far indeed. Sons Of Icarus are already on my list of bands to watch out for in 2012
Catch them whilst they still have a few gigs left in the UK (OK London!) this side of Xmas. If you think the songs are heavy on the CD, the live performances will take your breath away. Just buy the CD!
85/100
Posted by aorwxm at 22:09