Mustasch - 'Thank You For The Demon' Album Review 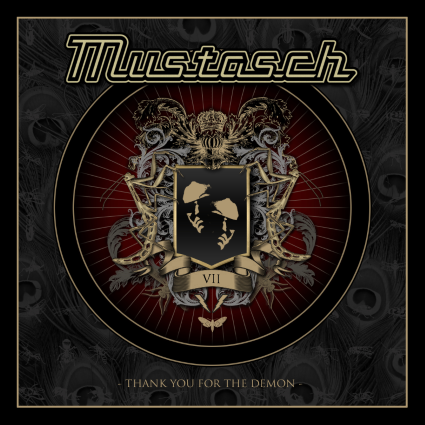 Thankfully being a Chesworth, its not every time you fall into a bucket of tits that you come out sucking you thumb! This rarity happened back in 2007 (and my very early reviewing days) when I was given the task of reviewing a band I’d never ever head of...and that was Mustasch’s ‘Latest Version Of The Truth’. I must admit I was completely blown away by the Swedish Riff-Meisters, and I have been ever since! From the first bars of ‘In The Night’ that was me - (pick your idiom)…hooked like a salmon, rabbit/deer in the headlights, like a dog with 2 dicks, like a child on Jim’ll Fixit…ok so maybe not the last one, but I was sold!

I think that Mustasch have one of the best combination of styles in the world, heavy and crunching solos, a singer like Ian Astbury on steroids, but with a melody that gets under your skin like a nice Dracunculiasis! Look it up people, I had to!! This writing shit is not easy.

'Feared and Hated' starts off a little pub singer-y (whoa-oh-ohooohhhh) before unleashing a hellfire riff that Mark Tremonti would be proud of; a gun-fire burst of riffage! All this power and with a bridge/chorus that's instantly memorable.

Title track ‘Thank You For The Demon’ has a gently piano accompaniment, before the ‘Lords Of The Riff’  ™ break out and shows the band evolving with a slightly different direction than normal.

'From Euphoria To Dystopia' sees Mustasch channel their inner Maiden/Lizzy, and then give Tony Iommi a run for his money with the doom laden ‘The Mauler’. One thing that stands out rather nicely after repeated listenings are the subtlety of the string arrangement they throw into many of their compositions. Its not just 4 blokes bludgeoning their instruments for pain and our pleasure, they are far more clever than that

'All My Life' is probably the closest the Swedes come to a ballad, or so you think. Its just 50% less metal than the norm.

Its short and sweet, weighing in at less than 37 minutes. Bur what 'TYFTD' lacks in minutes, it makes up for it in pure unadulterated quality. Not every album needs to fill 700Mb of data on a cd and be 75mins long.

To be fair to the guys, they have a formula that works, plain and simple. Its metal for us masses; powerful, brutal, and hellishly melodic to boot. 'Thank You For The Demon' is a stand out album in the Mustasch catalogue. It’s too early to be included in my top albums of 2013, as its not due out until Jan, but I can guarantee you already that it will be in my Top 10 of 2014 whatever happens.

Now PLEASE, get your asses over to the UK!

Feared And Hated
Thank You For The Demon
From Euphoria to Dystopia
The Mauler
Borderline
All My Life
Lowlife Highlights
I Hate To Dance
Dont Want To Be Who I Am
Posted by aorwxm at 00:47