Blood Red Saints are one of the many melodic rock bands on Perugino Serafino’s Frontiers Label. It’s where most of the decent melodic rock bands are gathered nowadays. Some are greats, some not so, and there’s also some indifferents, with the odd turkey thrown in! Hey you cant be 100% consistent in your approach.  But, I would like to predict that Blood Red Saints, on the basis of their new album, and this gig, could soon be up there with the ‘greats’.

The album review can be read here – http://www.chesyrockreviews.com/2015/11/blood-red-saints-speedway-album-review.html
Although other reviews are available, terms and conditions apply.

I learned three things from last nights gig….
1. The bloke working the controls is a Catholic (I’ve seen less smoke when a Pope is being elected!). At various points, Pete Newdeck disappeared.
2. Pete Godfrey is funny as fuck!
3. Blood Red Saints were on fire, and are definitely going places (OK it should be 4 points) 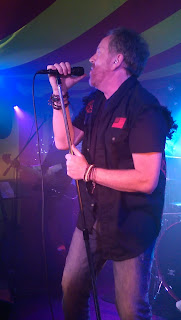 Anywho, by the time they took the stage, the room, and adjoining rooms were packed to the gills. The Railway is a cracking little set up, but for a short-arse like me, you have 2 options. You can either get great sound near the middle to back and see bugger all, or get down the front and sacrifice some of the sound quality. I went for the latter and chose well.

Immediately you can tell that Godfrey is a good singer and also a funny frontman; engaging, and I imagine he is a top bloke. They have also dragged a keyboard player off the streets of Lancashire - one Invin Parratt (Arabia / Rage of Angels)

BRS kicked off with the opener from ‘Speedway’, in the very powerful ‘Kicking Up Dust‘. Its part Dokken, thanks to Lee Revill’s Lynch-esque guitar playing. 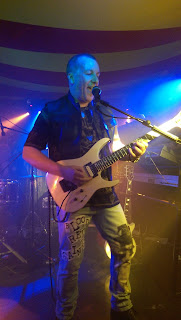 Right from the off, they look as if they are a band that are professional but are not taking life seriously which immediately rubs off on their audience. The songs are tight, with lots of in-between banter. ‘Mercy’ live is what makes BRS stand out from the crowd of AOR wannabees. Led by Godfrey, the other 4 guys all weigh in with a heavy wall of sound. FFS they even have a singer in his own right playing the drums (Pete Newdeck, he of many, many bands).  Its 5 part harmonies on a huge scale. ‘Best Of Me’ is one of the best ballads that you will here this side of Xmas, smooth as velvet, it also has the now patented ‘BRS 5xH’ sound!

A curve-ball is thrown into the mix where they play one of their fave bands songs. That is Signal’s ‘Does It Feel Like Love’ which is setting up their show for later on. Not all the songs from ‘Speedway are played tonight which is a little strange, but the highlight fro me is my fave from the album, and that is the menacing ‘Dangerous’. 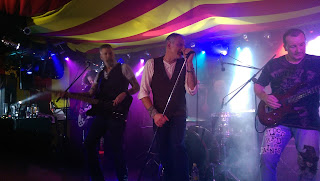 More of the BRS influences come to the fore for the last quarter of their blistering set. First, Godfrey called this guy a ‘God’, and he is spot-on, certainly in ref to his or should I say, THE voice, and its FMs ‘Face To Face’. A song that FM have dropped the last couple of years, it makes a surprise and welcome return here. Pete Godfrey does a great job. Barrie Jackson (he of Rob Naylors last outfit, Angels Or Kings)  jumps up, with a certain apprehension to sing Bon Jovi’s ‘Runaway’. Considering both bands have the same approach to their music, both singers couldn’t be further apart. For the finale, BRS also call upon Steve Kenny (AoK) for Whitesnake’s version of the classic ‘Here I Go Again’, the proper Hobo version!

‘Twas all soon over, and everyone in attendance witnessed a band in the ascendency. Those who attend HRH AOR in March will witness one of the bands of the festival, of that I’m very certain
Posted by aorwxm at 12:51