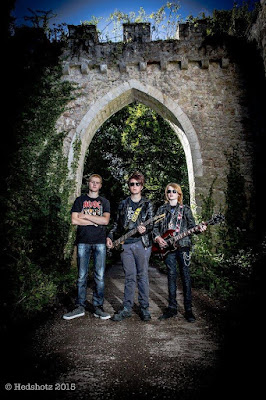 So far in 2017, my reviewing ears have been subjected to some tripe to say the least.  I was hoping for some relief, and thankfully I have found it!

I’d heard on the local jungle drums that there was a (very) young North Wales band that’s been growing in reputation and getting some serious attention. So when a mate of mine posted a FB Live video of theirs over the Christmas period I was hooked like a salmon.

The band in question is a three piece called Mad Haven hailing from Penrhyn Bay and Rhos On Sea. Neither yet known for being hotbeds of metal, but I predict it soon will be. Mad Haven consist of brothers Tom Rogowski – 15 (Guitar & lead Vocals), Alex Rogowski - 17 (Drums & Backing Vocals), and Joe Fisher – 16 (Bass & Backing Vocals). They are that young, their combined aged is just 48, and that’s still younger than this reviewer! This proves that you’re never too young (or old) to kick ass and rock. Mad Haven have been around since 2011, so just let that sink in a minute.….I have gig tee-shirts older than these lads.

Their EP ‘Sound Of The Music’ is an impressive one for such young musicians, which can only bode well as they develop further. Not only that, its their 5th EP which puts them in BCC territory! Straight off the bat, the intro leaves you in no doubt as to who they want to emulate – its kick-ass riffs straight out of the Aussie school of rock like AC/DC and Airbourne. ‘Running Far’ sees Tom channel his inner Lemmy for some throaty JD soaked vocals. God only knows what he will sound like when he is finally allowed to drink! The chorus immediately sinks in and requires no additional listen. The playing is as tight as a nut and if you closed your eyes the age does not come into his playing, as its mature, hits the spot and all down excellent. The rhythm section of Tom and Alex combine to make it one excellent intro into the world of Mad Haven.

Title track ‘Sound Of The Music’ leads you in a few directions before settling in. Its certainly straight out of the heavy metal songbook….’rock and roll is the sound of the music’. It leads itself to a 15 minute rocking live version I imagine as it allows the guys to go off in all directions. For me the best is kept until last. ‘Watcha’ Gonna’’ includes a line ‘all you think is what's for tea tonight’. The song is lifted by a refrain/bridge/chorus that experienced professional bands would love, make that 'kill' to write. Its all about the melody and Mad Haven have this in abundance.

So, despite my ‘young’ remarks, MH are as professional as they come. DO NOT dismiss this band as they are going places. If you like your metal to be tight, rock hard, balls to the wall, and tinged with the Aussie influence then look no further than Mad Haven.

Mad Haven have an EP launch party at The Marine Hotel, Old Colwyn, Sat, 11th Feb. £5 entry and you get a copy of the CD!! 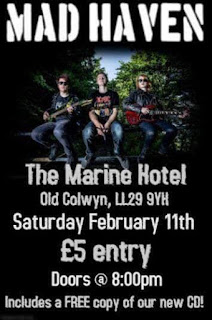