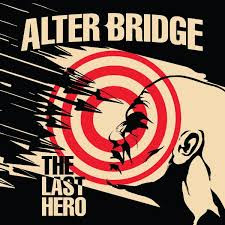 The Chesworth family has been praying at the Alter (Bridge) since 2004. We were on our holidays listening to local rock station WJRR and they played an Alter Bridge track. We were hooked like a salmon in a Bass Pro Shop. Since then we have watched them many, many times and seen them grow and develop into the behemoth that they are in 2016.

It’s a singular family event for us as its probably one of the few bands that unites us all. I say that as 2 x 49 yr olds, and the kids at 24 and 21.  Not many bands expand across generations in this day and age.

Its been a long three years since the skull pounding ‘Fortress’ was released, and the anticipation levels have been measured only on critical scales such as DEFCON & RICHTER in our household. My personal Alter Bridge pinnacle is Blackbird, a modern day classic and it’s up there with the likes of ‘Heaven & Hell’ as far as I’m concerned. Is ‘The Last Hero’ a worthy contender….?

Without getting too technical, ‘The Last Hero’ is definitely ‘Alter Bridge-y!’ Opening track ‘Show Me A leader’ starts off with what could be the opening to anything (could it go either way? A ballad, or a rip-snorter of a song). Thankfully it’s the latter, and its probably the best opening song on any Alter Bridge album to date. (awaits for abuse to come in). Mark Tremonti pulls riffs out of his ass like a magician would with white rabbits! It has a riff that Angus would swap Axl for, and with its FM friendly chorus, its pure joy! In Myles Kennedy they have unearthed the best vocalist this side of Ronnie James Dio in my opinion. He adds a 4th dimension as his voice is an extra instrument, hitting notes that few others could do without getting their balls trapped in a car door. But…..if you think its all the ‘Myles n Mark’ show, you’re wrongly mistaken. Driving the rock bus to their destination are the gruesome twosome of pulsating rhythm – Brian Marshall’s throbbing, powerful bass lines, and the Prince of Pound, Scott Phillips. 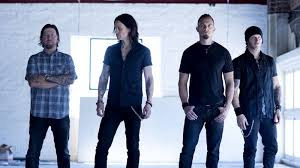 ‘Writing On The Wall’ to coin a phrase, is ’Heavy as Fuck!’ and mixes up its neo-classicism with a melodic chorus, and epitomizes what Alter Bridge do best. ‘ The Other Side’ almost lulls you into a false sense of security before its Sabbath-esque riff. Think Slayer covering Sabbath Bloody Sabbath.  ‘My Champion’ is an uplifting and positive song; when knocked down, just dust yourself off and get back up again, and is as near to mainstream as Alter Bridge ever get.

A couple of tracks (Poison In Your Veins & Crows On A Wire) don’t quite live up to the usual Alter Bridge ‘Acme’ (the name you can trust) high standard.  Alter Bridge have a voice and have something to say with ‘The Last Hero’. None more so than on ‘You Will Be Remembered’. A song that I’m positive that will be picked up with their troops back home. It’s also the kind of  now trademarked ‘funeral service’ song  (Watch Over You) that they are now known for. ‘This Side Of Fate’ and ‘Twilight’ certainly hark back to the very early days of Alter Bridge. ‘Island of Fools’ has a huge chorus that really highlights Kennedy’s vocal prowess. Finally we are into the title track; it talks about ‘the fight’ and asks if we have lost our last hero, leaving the listener gasping for breath and wanting more, finishing on a high.

Five albums and twelve years into Alter Bridge and they still have a lot to say. Hopefully we will see another twelve out of them. Once again, Mike ‘Elvis’ Baskette has produced the ass out of the album, In fact the production is slicker than a Castrol (UK) / Pennzoil (US) factory.

Its not their best album for me, but its still an excellent example on powerful and melodic metal. In a world of average bands, Alter Bridge is one that soars high above the mediocre. If they don’t headline Download within the next two years then something is seriously wrong!