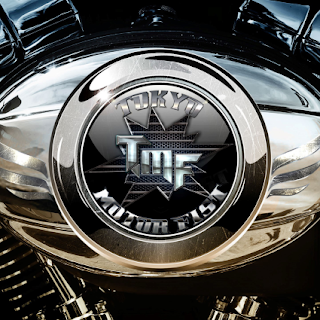 So out of the hat comes ‘Tokyo Motor Fist’. It's a good job they didn’t go with the second random generated name….’Paris Gearbox Elbow’.

Based on this line up I am expecting great things, as these guys should know what they are doing and what fans expect. After all, it is Ted Poley (D2), Steve Brown (Trixter), Greg Smith (Rainbow, Ted Nugent) and Chuck Burgi (Rainbow, JLT, BOC). As per The Defiants debut last year, I want this to be every bit as good.  Best way I can describe the whole experience is that its like the summer feel-good sound of Y&Ts Summertime Girls crossed with D2s Naughty Naughty and a slice of Van Halen thrown in for good measure. There’s not a single duff track on this album, and its one of the most feel good, uplifting, unashamed slices of 80s classic rock AOR. They’ve gone through the elements of the 80s that made their original bands great – huge riffs…check. Even bigger harmonies….check. Widdly solos….double check!

Ted Poley sounds great. Basically, the album just flies by. The first six songs just kick you in the nuts and doesn’t back off for a single second. Its hard to pick any faves as its so consistent. If I had to pick one, it would be the all guns blazing ‘Shameless’. Its in a similar vein to DFPs ‘Gimme Your Good Lovin’. The album only draws breath for the ballad-ish ‘Don’t Let Me Go’, before that 80s influenced (and future classic I swear to God) ‘Put Me To Shame’. In fact its one of the best songs I heard in the last few years. It’s that good, I asked the mother in law to knit me a new set of legwarmers! ‘Done To Me’ is as if Poley was fronting Def Leppard. ‘Get You Off My Mind’ borders on arena rock with its instantly memorable chorus. The album is all over waaay too quickly with the brisk and pulsating ‘Fallin’ Apart’.

Signore Perugino certainly has a knack when he is putting projects together. I'm hoping (like The Defiants) that Tokyo Motor Fist tour our shores, or at the bear minimum play a festival over the coming 12 months. TMF is one of the best debuts I’ve heard since The Defiants, Blood Red Saints & Angels Or Kings in recent years. Its not just the Poley Show, in fact Steve Browns guitar work is simple awesome, and when its all backed up by the gruesome twosome of Burgi and Smith, it all makes for a superb album and listening experience!