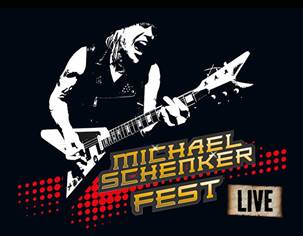 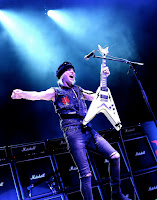 As an ardent, dyed in the wool rock fan, I sometimes, only sometimes feel a bit aggrieved with my lot as a rock fan. The Germans have been getting this 'Rock Meets Classic' for a number of years, bands tour the US as they think there's no other life out of 'Murica, and the Japanese get bonus tracks on albums and throw a lot of money at bands which I'm guessing is the case here. Come on promoters of Great Britain, pull yer fingers out

Few live albums have excited me over the years. In fact I can count the ones that still have a special place on the fingers of one hand - Rainbow 'On Stage', UFO 'SITN', Lizzy's 'L&D', Purple's 'Made In Japan' and MSGs 'One Night In Budokan’. In fact, ‘ONIB’ was my first ever MSG purchase, aged 15! 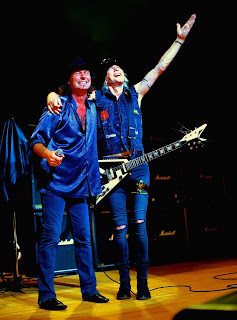 So what do we have.....well, it's a comprehensive package of a 2 x cd, 1 x DVD (with other formats available). The lucky Japanese got to see a MSG show with, not one, not two, but three of the bands iconic vocalists (and all are still performing today so its not as if they were shipped in a crate, dusted off and given a shot of adrenaline). Top this lot off with legendary bassist Chris Glen, and Ted McKenna. The band is rounded off with Steve Mann (guitar, keys, and Lionheart).

First of all we get 3/5 of the Budokan line up, and it makes me all nostalgic in wishing Cozy was still with us. 'Into The Arena' kicks thing off extremely well and is a fail-safe way to start proceedings. First up, in order of vocalists is 'my MSG' Gary Barden. Whilst he doesn't hit the high notes of 'Attack Of The Mad Axeman' he still sings well. I think he is just warming up, as for ‘Victim Of Illusion’, ‘Cry For The Nations’, etc., its a very similar Gary to that one of (getting on for) 40 years ago, and is only a bit squeaky on 'Armed And Ready'. Michael, as ever, has not lost a single bit of his guitar god status. His soloing is sill as emotive and flows like a raging torrent, repeating solos note for note from the originals. Scorps classics 'Coast To Coast' is, as ever a staple of Schenkers set and is faultless. 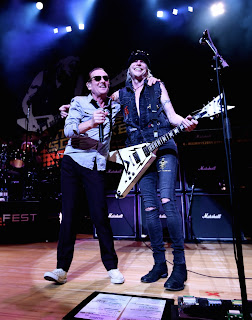 Next up, it's the return of Graham Bonnet. It's quite ironic really, as Bonnet never got the chance to sing his songs live on the ‘Assault Attack’ tour (apart from one infamous gig in Sheffield!). It's probably the most underrated of MSG albums. Not on my watch. If anyone doubts Bonnet’s vocals, he is on fire for 'Assault Attack'. Then it's straight into ‘Desert Song’, which isn't just one of the best MSG songs, it's one of my fave rock songs ever recorded. Bonnet looks as if his jaw is going to dislocate when he goes for the high notes, and as ever he lives up to his reputation of slicked back hair, shades, suit, tie and sneakers. For most of the part his performance is also excellent, just a tad pitchy on the 'poppy' 'Dancer'. 'Captain Nemo', an underrated classic Schenker instrumental is given a good ‘ol airing, before Robin McAuley is introduced. Out of the three vocalists, it's McAuley who sounds the best; his voice unchanged and is still hitting all the high notes with ease. McAuley Schenker Group not the most 'classic' of the MSG line-ups, but they did have a few really good songs, and for some strange reason, the two biggest of the McAuley Schenker Group era songs, 'Gimme Your Love' and 'Anytime' were not played. Strange. 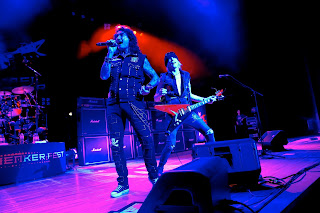 McAuley is given the opportunity to shine on the Mogg/U.F.O. classics 'Shoot Shoot' and 'Rock Bottom'. He is then joined for the finale by Bonnet and Barden for 'Doctor Doctor', only this time Bonnet didn't grab the guitar tech from behind the speakers and pull him to the front of stage. The crowd go nuts, but it's probably the weakest of the whole set due to the varying vocal styles.
The 1 hour 38 minutes just whizzes by, and that's a testament to the great songs, and great performers coming together for a special gig. 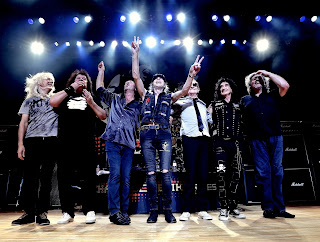 I'd just remove two of the UFO songs, and concentrate on the MSG. I'd love to have seen 'On and On', 'Ready To Rock' and 'Gimme Your Love' being played., because you can see the UFO at any of the 'Temple....' shows.

Despite the cracking line up, it's essentially the Michael Schenker show. It's his name above the door so to speak, and it's he that still shines the most.

The DVD has an annoying filter when viewed. If the blurry is similar on the Blu-ray I'd be well pissed off, as it's like someone's sprinkled dust over the lens. Either that or our telly is filthy! It's there right from the off, which I thought was a 'feature' at first, then some pillock forgot to switch it off. Not the best viewing experience! That aside, this package is worth it just for the DVD, and seeing the 80s MSG reunited. 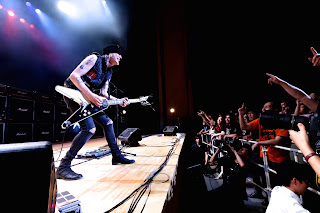 The CD offers up the same as the DVD, and whilst enjoyable it's not quite the same as being able to see these greats performing on the same stage. Now can somebody please set up a funding page to make this happen in the U.K.

Essential if you're a fan of any of these three MSG eras.

Filmed and recorded at Tokyo's International Forum on August 24th, 2016