The two bands on stage tonight deserve/d to be huge. DNR had all the ducks lined up in the late 80s/ early 90s and were tugging on the coattails of the likes of Bon Jovi with their funk/rap/jazz/ soul infused hard rock edge with some pop overtones. They were fairly unique in their day, and is possibly....no, make that definitely why their record company did bugger all in spreading the word. So instead of tonight’s gig being at Wembley, it’s at the Chester Live Rooms. 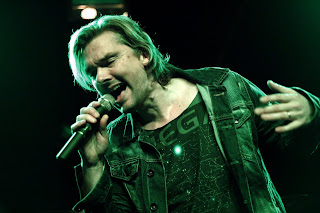 Vega on the other hand still deserves a shot at being huge. They’ve been around a while now (since 2009) and with every passing album and gig, there’s bigger and better performances coming from the guys.  Last night nudged my Vega viewing into double figures. One thing these lads do ever so well is, first and foremost hit you with a powerful melody. The first song ‘Stereo Messiah’ was missed due to visa issues (a Welshman travelling into England) so I entered to the anthemic ‘What The Hell’ and by this point in the place was rocking. Its also nice to see a Live Room gig attended by quite a few people for once, and Vega, whilst nowhere near the same type of band as DRN, they prove to be a perfect foil for them. When you have the Martin brothers shitting out melodies for fun, and then having this backed with the guitar prowess of Marcus Thurston, and a powerful and engaging front man like Nick Workman, it makes for a cracking nights entertainment. ‘Gonna Need Some Love Tonight’ is a prime example – infectious, and with an end line harmony that will melt the hearts of any a detractor. Apart from a minor potential electrocution, Vega was superb. New songs like 'Every Little Monster' (I cant type it without singing it) are potential future classics. All the songs are anthemic, and why set out your stall as being ‘average’ when you can write and perform songs like ‘Hands In The Air’, ‘White Flag’ and ‘Savin’ Grace’. I expect them to be one of the bands of the festival at HRH next weekend. 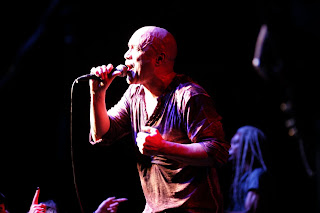 Dan Reed Network is a different band. They all seem relaxed; in fact I don’t think I’ve ever seen a happier looking band. Just don’t miss your cue, or set the monitors up correctly as Mr Reed, despite the smiles and political statements/and Trump jokes, is a consummate professional. After the lady jiggled some wires  (oo-er!) at the front of the sound desk, we were ready to be taken on a journey. Tonight (possibly others too) the set list is non-existent pretty much and the DRN is open up to offers….but more of that a little later.

Straight up from the debut is in force with DRN storming into ‘Ritual’. Despite being the wrong side of 50 (60+ for Brion James!), not just Dan, its all bar young Rob, they all prance about the stage just like it was 1988. The faithful were not to be disappointed, songs were played from all across the network, “seven Sisters Road” played with a frenetic ending, after which the floor was opened up by Dan, now taking requests….’Rainbow Child’ shouted a punter. The usual response for this said Dan was for every ‘Woo-hoo’, there’s a ‘fuck no!’ Thankfully the ‘fuck no’s’ were beaten down and they hammered it. ‘I’m So Sorry’ was up next. It sounded as if it hadn’t had an airing in quite some time, but this added to the whole enjoyment and spontaneity of the evening. I prefer to call it an ‘off the cuff’ performance. 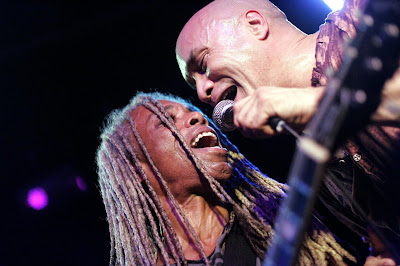 ‘Baby Now I’ segued into a medley of Kiss’ ‘I was Made For Lovin’ You’, ‘Enter sandman’, ‘Relax’ ‘All Right’ (sung by Melvin, followed by a bass solo) and a smidge of ‘Highway To Hell’ Fantastic stuff indeed! A couple of new songs (Infected’ and  ‘Champion’) sandwiched ‘Under My Skin’ and some Bruce Lee Kung Fu with added drum sound effects. Young pup Rob Daiker was given the chance to shine with one of his own songs, an excellent blues number ‘All For A Kiss’ first accompanied by Brion, then the rest of the Network joining in. This stripped down version with just a guitar was superb.

The last three songs were at hand with ‘Ritual’ being my fave of the evening. That much so, I still can’t stop singing it some 15 hours later. The staple ballad ‘Stronger Than Steel’ set the tone, finishing with a crescendo and ‘Tiger In A Dress’.

Dan still sounds pretty much identical as he did almost 30 years ago, and it makes for a terrific nights entertainment. Throw in James. Pred, Brannon Jr and Daiker, and the end result is one of the best gigs you’ll witness in 2017 or any other year. Most of the gigs are almost sold, so what are you waiting for….get your asses our to one of the best tickets in town. All this for a mere £9 a band and you can say hi afterward. No £50 meet n greet to be seen here folks! My only gripe…..no ‘Make It Easy’, ‘Slam’ or ‘Long Way To Go.’

That said Vega and Dan Reed Network provided one of the gigs of the year without a shadow of a doubt.