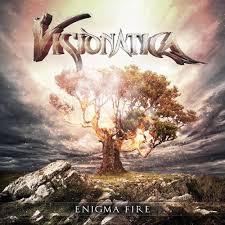 Visionatica  - Enigma Fire
Visionatica hail from Germany and were formed in 2013 and didn’t hesitate to make their mark within the symphonic metal genre.  2016 saw the release of their debut album Force Of Luna which was very well received and confirmed that Visionatica were a band that were going places.

Whenever you learn of a symphonic metal band with a female front person the immediate reaction is to compare them to the likes of Delain, Within Temptation, Epica and Nightwish, and in this instance the similarities are undeniable.  However you can not take anything away from Visionatica because they have added a twist to their sound and are also an extremely talented band.  Their latest release 'Enigma Fire' sees the band utilising different styles to compliment their sound.

The opening track 'Amari Subdina Kali' is a 90 second introduction to Tamara Avodem's soaring vocal style. 'The Pharao' is a fantastic track with a solid hard rock backing to Tamara’s soprano vocal style will make you sit up and listen. The third track 'Fear' follows on from The Pharao with soaring guitars, thunderous percussion and beautiful vocals and you’ll really struggle to keep your feet still when this track is playing. Once past the orchestral opening the fourth track 'Roxana, The Great' bursts into life and you’re taken on a wild ride of symphonic metal at it’s best.  'Dance Of Fire' keeps up the smooth pacing of the album with a riff heavy opening before Tamara’s soaring vocals join the throng.  However at this point I know what’s to come and I’ll be simply repeating myself and sadly that does go for the rest of the album.

Visionatica have utilised music from different cultures and they have done so well the problem we have is once we get beyond those styles the rest of the track is the same melodic hard rock that the band play so well. The only track that actually differs is track seven, the ballad 'Incomplete'. This track is completely devoid of any rock sound at all and is basically Tamara singing backed by a piano and string section, and ironically the only track with a different sound is the only track that I didn’t really like. This is actually the first time that I have heard of Visionatica  and on the strength of this release I went in search and bought their debut album 'Force Of Luna'. 'Enigma Fire' is a cracking album and I am happy to recommend it to any fan of the symphonic metal genre,  I’m also putting my money where my mouth is as I have pre-ordered the album myself.
Although this a fantastic album due to the fact that so many of the tracks sound the same once they’re beyond the opening bars  I am unable to score it anymore than 8/10.
Review by Hollywood Vampyre

Track Listing
Intro: Amari Sudbina Kali
The Pharao
Fear
Roxana, The Great
Dance Of Fire
To The Fallen Roma
Incomplate
Secrets Of The Ancestors
Rise From The Ashes