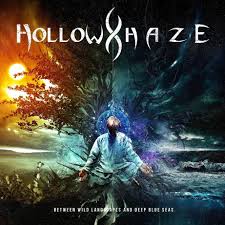 
Hollow Haze formed in 2003 by Nick Savio with the idea to put together a new original “Hard & Heavy” sound. The first album called “Hollow Haze” was released in 2006 by “My Graveyard Productions”The second album “The Hanged Man” was released in 2008 by Crash & Burn record and got a great response from magazine and hard and heavy web sites.With a great production Hollow Haze outlined once and for all their “big heavy dark” sound.
In 2014 Fabio Lione had been replaced by Mats Leven (Yngwie Malmsteen, Therion, Candlemass), Rick Altzi (Masterplan, At Vance), Amanda Somerville (Avantasia, Epica, Kamelot, Edguy, After Forever), Ivan Giannini (Derdian) and Claudia Layline (Serenade) for the recording sessions of ‘Memories Of An Ancient Time’. In 2017 Fabio Dessi (Arthemis) and Paolo Caridi (MLB) joined the band as singer and drummer. The new album is written by Nick and Fabio and it's called “Between Wild Landscapes And Deep Blue Seas”.

To be honest I wasn’t a fan of the original incarnation of Hollow Haze but recently learned that they were making a comeback with a new sound so I decided to give 'Between Landscapes And Deep Blue Seas' a spin, and from my previous experience with the band I wasn’t expecting much. Holy shit I was wrong!

This album is a collection of beautifully written songs backed with an amazing mixture of melodic hard rock and symphonic arrangements  This album is perfectly paced, transitioning between up-tempo in your face rock anthems and the slower balladesque (is that even a word?) tracks. I think a lot of thought  went into the running order of the songs to allow this album to run so smoothly.  This is a strong album and there isn’t actually a weak track.  However if I closed my eyes I can hear the similarities between female bands such as Visionatica who’s new album is also due for release later this month, I also reviewed that album and it received a well deserved 8/10, although there are obvious similarities between the two acts I have actually given Hollow Haze a slightly better score of 8.5/10 for the simple fact that this is by far the best example of male lead symphonic  rock I have heard. As a rule when I buy albums by an artist I like to get the complete discography but in this case I am going to ignore Hollow Haze’s first six albums and start with Between Landscapes And Deep Blue Sea  because as far as I’m concerned this isn’t a Hollow Haze release it’s a Hollow Haze version 2.0 release.