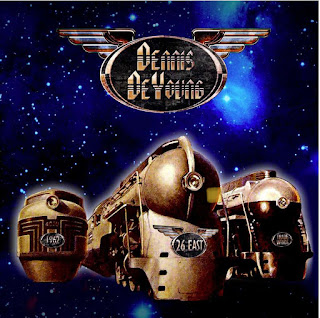 It was the novelty of the world’s first laser etched single, “The Best of Times”, which first drew my attention to Styx. From the moment the needle hit the record, I was well and truly hooked. The singer of that song was Dennis DeYoung, who together with his band mates, made up of one of the most successful American rock bands of the era.

There are, therefore, two ways to approach a new album by Dennis DeYoung – the first is as a solo performer and the second is as a former member Styx. DeYoung is rightly proud of his legacy of Styx music, and his solo work is faultless to a tee, but there is always bound to be some crossover in the subconscious mind unless you have no prior knowledge of the history.

The opening cut, “East of Midnight”, is a promising start to the album with a fanfare most beloved by the Pomp Rock brigade! The chugging autobiographic verses lead into a trademark Stygian chorus and an instrumental section which includes dual lead guitars, a church organ and synth solos! This is prime-time DeYoung!

“With All Due Respect” continues the theme of “Turn off CNN” from his previous album “One Hundred Years From Now” although the vitriol this time seems more evenly matched against both left and right-wing media channels.

DeYoung’s ear for effective light and shade gives us some of the album’s best moments, notably with the superb “A Kingdom Ablaze” with its eerily atmospheric introduction morphing into a dynamic rocker with a memorable hook.

The inevitable romantic ballad comes in the form of “You My Love”, and as much maligned as he has been for the likes of “Babe” and “First Time”, you have to give the man credit - he really does write a great love song!

“Run For The Roses” and “The Promise Of This Land” showcase DeYoung’s versatility as a songwriter and performer, harking back to theatrical style and vocal delivery employed on his mid-nineties “10 on Broadway” and “The Hunchback of Notre Dame” albums.

Opening in a light mood, “Unbroken”, lopes into an uplifting harmony-laden chorus while “Damn That Dream” exhibits a series of attractive musical facets and clever lyrics as it runs its course.

The infectious, celebratory tone of “To The Good Old Days”, a duet with Julian Lennon, is a big highlight. The more you listen, the more you enjoy and appreciate what’s going on here! It will never replace “Come Sail Away” in the concert set-list, but be sure that your lighter is fully loaded with fuel, or at least that your cell phone battery now has enough power to last for two songs! It’s almost forty years since he toured on this side of the pond - let’s hope European audiences get the opportunity to witness this great performer again before he calls time.

The album’s closing song, “A.D. 2020” retreads old ground using a familiar musical theme from the “Paradise Theatre” album but this time it’s far more impacting. Knowing that DeYoung said that this was going to be his last album, this becomes far more personal, and it’s sad ...

This album brings his career full circle. The album title “26 East” is the address in Roseland on the south side of Chicago where the genesis of Styx began in 1962 with a band called Tradewinds which he formed with twins John and Chuck Panozzo who lived just across the street. At the group’s inception, Dennis played the accordion. When you know the history, hearing him play one on “A.D. 2020” this song makes it all the more poignant.

Thankfully, so much material had been written, Serafino Perugino, CEO of Frontiers Music, suggested splitting it between two albums, hence “26 East: Volume 1” – so we can now all anticipate what Volume 2 holds in store – personally, I can’t wait to hear it!

Tracklisting:
East Of Midnight
With All Due Respect
A Kingdom Ablaze
You My Love
Run For The Roses
Damn That Dream
Unbroken
The Promise Of This Land
To The Good Old Days
A.D. 2020