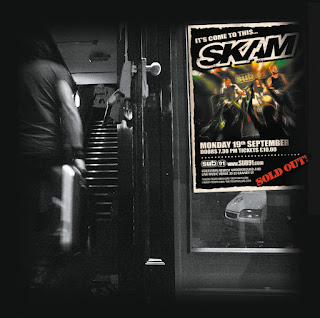 These three guys hail from Leicester, not the hottest bed of metal in the UK I think you will agree, but I think that Steve Hill (guitar & vocals), Matthew Gilmore (Bass and vocals), ‘X’ Ray Peverill (drums) are about to put Leicester firmly on the map o’metal!

I was lucky to witness Skam supporting both The Answer/ The Union on their recent UK tour. Such was the power and energy coming off these guys, they could power half of Leics with their stage energy

Similar to bands like AC/DC and Stones, Skam have a simple but effective formula – if it aint broke, don’t fuckin fix it! Whilst they cannot be compared with other 3 pieces like Rush or Muse, Skam do what they set out to pretty effectively

Opening with ‘Soldiers of Rock’ Skam prove their mission statement and it is as tight as a gnats chuff. Singer / Guitarist Steve Hill hasn’t got the full range I’d like from a rock singer, but replaces this with a raw passion and energy and his style suits the songs perfectly. They veer from Metallica to Maiden in the space of a few bars – and it’s not a bad comparison to make, is it? ‘Dead From The Waist Down’ once again pushes all the (and my) right buttons and has a pretty cool and ever so catchy bridge and chorus. ‘No Lies’ has a riff straight out of the 80s glam metal scene, and is driven along by Peverill’s powerful drumming. ‘Massacre’ starts off with a kind of vibe straight out of Vanilla Fudge’s repertoire. The blues tinged ‘Going Away’ is where I feel that Skam fit the best. Despite the heavy powerful rockers, ‘Going Away’ gives Hills voice the best vehicle for his talents. It hits you in stages, firstly after the first chorus where the drums kick in, and then again with a Lizzy-esque guitar break, before – wait for it – their own take on what could easily pass for a ‘Mission Impossible’ theme.

To be totally honest with ya, these no real filler on the whole cd. ‘Weapon’ is definitely the best of the songs on offer on the second half.

I love this writing malarkey when it springs up something new for me to get my teeth into and hopefully pass on some new bands that some ‘dyed in the wool’ old farts would never get to try out. If just a few of you go out and buy this debut from a very promising and home grown UK rock band, then it’s a beautiful thing indeed.

Skam I’m sure will be making great strides in the near future and are definitely a band to watch out for in 2012. Catch em live because this is where they shine.

Support your UK rock music people! Skam needs you, and you need Skam!!!!