Gary Moore - Back On The Streets Album Review 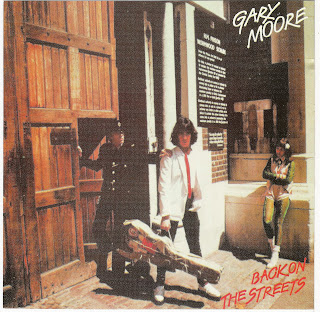 Gary Moore is one of the underrated good guys. His tenure in Thin Lizzy was relatively short, but very, very sweet, yielding classics such as Do Anything You Want To, Waiting For An Alibi and the very underrated classic Black Rose.

Opening track 'Back On The Streets' would have been good enough to grace any of the superior Thin Lizzy albums, and sees Moore ripping into a killer riff, with Lynott’s unmistakable vocals filing in the chorus, and it sees Moore throwing in all but the kitchen sink into his guitar playing. 'Don’t Believe a Word' is a very nice surprise, a slower more intimate version compared to the one on 'Johnny The Fox', with Moore and Lynott sharing the vocals. It works just as well at this slower blues pace as the heavier original, with the solo similar to 'Still in Love With You', proving Moore had the Blues at a very early stage in his career.

'Fanatical Fascists' is more of a rock/punk ditty that still holds up some 35 years later. Like many a guitar players solo albums, Moore is no different with the of the 8 being instrumentals, and out of these 3, the comically titled 'What Would You Rather Bee or A Wasp' shines above the rest, and has more of a jazz funk feel to it, and sees Moore shredding the arse off of his Gibson Les Paul.

'Song For Donna', is a little too laid back and slow ballad for my liking, but the album ends on an absolute killer and it quickly became THE Gary Moore tune of choice, 'Parisienne Walkways'. Anyone who has heard this live has probably never heard it better than the original with Lynnot’s vocals. Moore has a fine set of pipes, but can be a bit Marmite and screamy for some, but this is the definitive version that got unto the UK charts (No.8 in 1979), a haunting melody that was probably played at every Gary Moore encore since 1978

Whilst Universal have nailed the extended version series somewhat recently, it’s good to see that there’s some bonus material still available. Whilst not huge, it’s  essentially 2 songs ('Track Nine' and 'Spanish Guitar'), of which the latter is covered 3 times – version with Lynott, Moore and an instrumental version just so you can sing along in the shower

Yes, Moore had one of those faces that only a mother could love, but f*ck me, he was an excellent guitar player. I later likened him to the Lee Evans of Rock Music, as he was the only man who matched Evans in the sweat department.