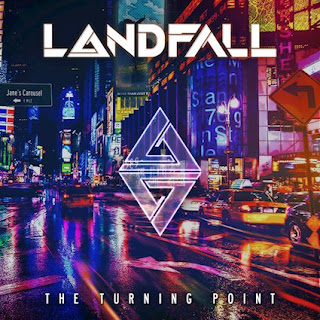 According to the PR bumf that comes through, Landfails singer, Gui Oliver (ex-Auras) is a ringer for Steve Perry. You know the people that you hear about in the news that get a knock on the head which causes anmesia, then when they come around, speak in a French accent. Well this fella got a right pounding and come back round with Steve Perrys clothes but Eric Martins voice, if Eric was singing in the bathroom next to you with the bathroom door shut. Its Eric, but not quite Eric if you see what I am getting at. This is the Trumpness that you sometimes having to contend with when emailed a press pack.

“I’m really glad to be back with Frontiers with a new band and new songs in a new perspective. I believe this is my best album so far. I was really impressed when I met the band for the first time. They are truly amazing, gifted and very prepared to do this with me,” says Gui Oliver.

Landfall was originally started by drummer Felipe Souzza and guitarist Marcelo Gelbcke, who are childhood friends and have been playing together since they were about 15 years old. Some years later, bassist Thiago Forbeci joined up with them, adding new musical input and influences and the band decided to go in a new direction.

They began writing their songs and creating their own music repertoire to work off of and it was during this period that they recorded a few albums together and performed several concerts around Brazil, including opening for acts like Glenn Hughes and Mike Vescera.

Opening track ‘Rush Hour’ certainly gets ‘TTP’ off to a cracking start. It’s a pace number that skips along and had a decent crunchy riff and an instantly singable chorus. ‘No Way Out’ ticks some boxes and is catchy enough. ‘Jane's Carousel’ follows a similar path. ‘Across The Street’ shows Landfall at their best and reminds me of early Ten, and ‘Don’t Come Easy’ is one of the more pleasant ballads Ive heard recently, considering I’m not a massive fan of ballads any more.

Its basically ‘wash-rinse-repeat’ from here on in. ‘Roundabout’ and ‘Sound Of The City’ stand out in the second half of the album, and ‘Hope Hill’ offers up a singalong moment for the listener. Beyond that, its bang average, in a sort of an half decent way. The songs are pleasant, a couple are very decent, but there’s not enough here to tempt me in for a second or third listen. Some people will think Im talking out of my Covid-larger-than-normal arse, but I just feel it has all been done before, and in a lot of cases, much better

Half of the album is good, but the balance is basically melodic rock by numbers. The production is good though, the playing for all is what I’d expect from a Frontiers AOR signed band.

I jest when I say that Oliver doesn’t sound like Steve Perry, but really, he doesn’t. Ok, maybe a few notes here and there, but he is not in the same sounding universe as Hugo Valenti or Arnel Pineda. Now those two are Perry ringers.

Sound Of The City *