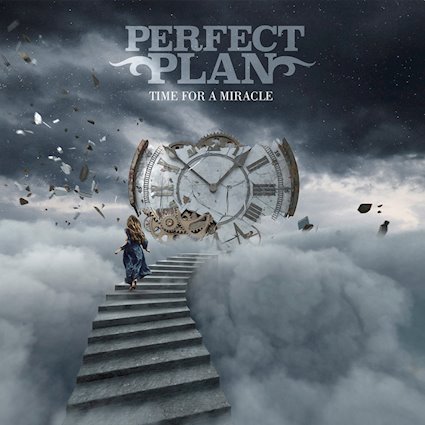 Perfect Plan - Time For A Miracle

Blummin’ ‘eck. Two years have shot by since the delights of the Perfect Plan debut, and in ‘In And Out Of Love’ it was one of the melodic rock anthems of 2018. So has two years done anything for them? Well, its No.2/sophomore album/2nd album syndrome, where you can soon tell if the songs on the second are not as finely tuned or honed as the originals as they (the debut songs) could have been in development for years. I'm a firm believer that cream rises to the top, and with a singer like Kent Hilli on board, that Perfect Plan will have no such problems. So. fingers crossed, eh?

Well, if you’re going to rip off a band, then you might as well take a song from 1985 and hope the likeness isn’t remembered due to bands and fans either being dead now, suffering from early onset dementia, or just punch drunk because of Covid. Well you can’t fool me, you pesky Scandinavians! If you think you’ve heard the drum into to ‘Time For A Miracle’ it’s because you have. It’s pretty damn similar to the Scorps ‘Crossfire’ and nearly sent me round the twist thinking where I’d heard it before. The similarity ends there though, as beyond the drum intro is a finely executed song with single written all over it. ‘Better Walk Alone’ is upbeat and raids Lou Gramms note book (almost) for ‘When we make love you know it’s all understood’. OK so I’m a bit picky, but ‘BWA’ is Giant, Steelhouse Lane and Survivor all rolled into one. The sound is great considering its probably on a shoestring compared to budgets of the 80s. Two songs in, its heavier than the debut, and that for me is fooking great!

‘Heart To Stone’ evokes memories of Bon Jovi’s ‘Runaway’ and that dear reader, is no bad place to pitch your tent. ‘Fighting To Win’ is the inevitable ballad. Piano and vocals kick it off, before everyone wades in for the chorus. I’m getting less tolerant of ballads as I’m getting older, but its part and parcel pretty much of most melodic bands so I admit its my problem. It's like Dave Bickley got the call. ‘Every Time We Cry’ gets PP back on track with more pace and some decent vocals from Hilli. More guitar, less parpy-ness. ‘What About Love’ again follows a music by numbers and is good, but I’m looking for ‘great’ And half-way through I don’t yet have a stand out or goose-bumpy moment. That is until ‘Nobody’s Fool’ it’s a blues tinged number that is more rock n roll than anything so far, and rocks more than it rolls. ‘Living On The Run’ picks up the torch from ‘Nobody’s’ and had these two been on ‘Side 1’ to use an analogy, my appetite would be well and truly whetted!! ‘Just One Wish’ evokes Robin Beck and Signal to good effect. ‘Don’t Blame It On Love Again’ is anthem enough to make another single choice and Hilli’s vocals are superb. ‘Give A Little Lovin’’ is energetic enough and Hilli again sings his arse off. Let’s face it, when doesn’t he? ‘Don’t Leave Me Here Alone’ has more vim and vigour and is more of a stirring ballad with a nice guitar solo.

To be honest, Hilli sounds great, the production excellent, and its because of the heavier songs in the latter half of ‘TFAM’ that make it for me. Its polished AOR by numbers, and it will easily make lots of fans Top 10 lists come the year end.

To make a comparison, if you currently have a Survivor/Jim Peterik sized hole in your life, then Perfect Plan have the shovel.

Time For A Miracle

Every Time We Cry

Living On The Run

Don’t Blame It On Love Again

Give A Little Lovin’