It was a bit of fun finding a parking space close to The Eagle. The reason? It shits in the shade of the mighty AO arena. It just so happened that there was a gig on tonight with N-Dubz providing the entertainment. I would like to think though that those in the know were descending upon The Eagle Inn to see what would be (as it turned out to be) one of my favourite gigs (and venue) of this year.

Where the AO has a capacity of 21,000, The Eagle Inn has just 80. The 30-40 that did show, got one hell of a gig to tell their friends about. I was already in the know as I got to hear both do a quick sound check and couldn’t wait for the gig to get underway 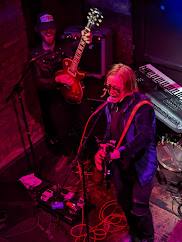 Firstly we have Electric Black. Coming all the way from Hitchin for a 45 min set takes some doing, but these guys wouldn’t like it any other way. Opening with a working title of ‘Led Hendrix’, it really was a song born from the annals and foundations of rock history, and in singer Ali they have a guy who can sing ANYTHING. This was highlighted on the excellent ‘Love Is A Light For The Lost’. Also Electric Black have their ‘go to killer moment’ with ‘Homecoming', a song that is their own ‘Heaven and Hell’ and ‘Holy Diver’ all rolled into one. Finishing up with ‘Not Afraid To Die’ it is the heaviest song on the album and absolutely is the cream on an already excellent set. Electric Black have been doing this for some time and was evident as they were as tight as a nut. From the mayhem of Animal influenced drummer Matt, and the playing in the pocket of bassist Ryan, to the superb Jonny on lead guitar, Electric Black are going places. If I’d have known they played my nearest venue last week I’d have been there. I am a week late, but the end result is now the same. Catch these guys if you can, as you will not be disappointed. I guarantee it.

Onto headliners Sweet Crisis. I absolutely love it when you see or hear a band the first time and your breath is taken away. Just like EB, my moment was getting ho hear Sweet Crisis debut a few months back. It was a case of being better late than never, but I was blown away by their collection of songs on ‘Tricks Of My Mind’. The band is built on the friendship of singer Leo Robarts and guitarist Piers Mortimer, but more of that later. Opening with ‘Loosen Up’ the quality is immediately there for people to see. Leo is part Paul Rodgers, Glenn Hughes and Steve Marriott, and that is some amalgamation of talent right there, with his best mate at his side these guys are unstoppable. ‘Black Magic’ has some nice 3 part harmonies and is the first highlight of many. 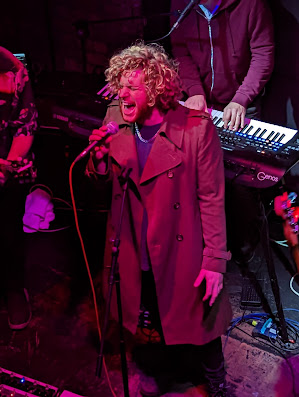 For ‘Love Me Like Sugar’ if B.B.King and Paul Rodgers (OK, bear with me) had a love child then ‘LMLS’ is the end result. ‘Aint Got Soul’ is one of my favourite songs from their album and hearing it live took it to another dimension, never mind new level. Theres a back story behind ‘I'll Be Creepin’. Leo was into Eminem and Jamiroquai when is dad gave him a copy of Free’s 'Fire and Water' when he was 14. (Yay for dads!) Right there a spark was ignited, which changed young Leo’s life and has never looked back. Leo isn’t keen on covers, but let’s face it, when you have a voice like he has, then it makes for one of the best covers you will hear of a Free classic. Hot of the press was a new song, ‘The Warning’ and it was smooth as fuck (insert better simile here____).

This next song was my favourite of the whole set. Written when Leo and Piers were just 17, it proves that age is no barrier when writing songs. Leo becomes a baptist preacher, and its a quality of song that many a Southern Rock/Nashville band would crawl over their dead granny to get hold of. It was stunning live. ‘Dont Start Now’ was pure blues heaven, and was the shit. At the and of the song one bloke shouted “Fuck yes!” It shows that you can write a review in just two words. I couldn’t have put it better myself. ‘Living “Life On The Edge” had then jamming on a powerful groove and takes me back to the era of bands like Cream and Jefferson Airplane. SC finished strong with the title track ‘Tricks On My Mind’, and a powerful single from 2020 in ‘Rolling In It’.

It’s hard to vacate the stage for an encore when it is the size of a postage stamp, so they stayed put. Sweet Crisis will probably drop the covers as their song list gets bigger, but when you cover Fleetwood Mac’s ‘Oh Well’ as well as they do, then its good to throw in a crowd pleaser for us old farts. The guys finished off with a song that got them started and recognised back in 2019, ‘Misty Haze’. I know it’s me repeating myself but this has blues and soul in abundance, and echoes Pink Floyd and Jeff Buckley. The guitar tone was beautiful. What a song to end a gig with. 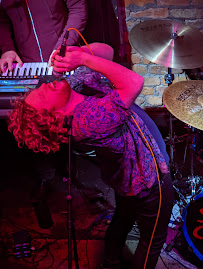 Theres a tendency for bands to play their whole album in the early days of their gigs. That may be the case here, but Sweet Crisis have a foundation of stunning songs already that will be a staple of their live gigs for years to come.

I have witnessed some great fledgling bands this last 12 months since gigs have opened up again - Cardinal Black, The Karma Effect, and now Electric Black and Sweet Crisis. Add the likes of Scarlet Rebels and Florence Black into this mix and British rock music is in very safe hands indeed.

Based on tonights performances I hope that they both continue to record and gig as they both deserve to be heard by much bigger audiences than current. The numbers did not detract, in fact it enhanced it as it felt like a gig in your own living room. We can all say that when they do make it, we were there almost from the beginning. I can’t wait to see what Sweet Crisis (and Electric Black) do next.

Living Life On The Edge

Tricks On My Mind