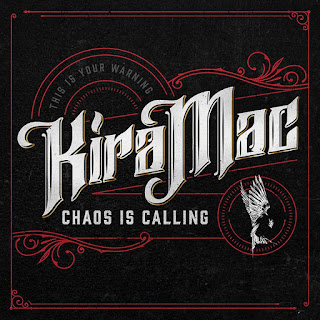 Every now and again YouTube throws me a bone to a band `I’ve not encountered before. OK, to give them credit, it does it quite often, but I have a short attention span. Im not a kid where it has to grab me by the bollox in the first 10 seconds, I’ll give it a listen at least until I get to a chorus.

I can’t tell you what I was listening to in the first place, but Kira Mac appeared and it was an occasion whereby I my bollox were well and truly grabbed (so to speak). I will tell you why shortly.

Any who, Kira Mac are making little gains that seem to be gathering momentum -

I am 100% certain that all of this achievement will be well and truly eclipsed 6, or 12 months from today. I am that convinced, Ive put a reminder in my calendar to check out the stats!!

Kira Mac are mainly based in and around the North of the UK. Vocalist and reason for the band name Kira Mack along with guitarist Alex Novakovic and bassist Bret Barnes all hailing from Manchester. Joe Worrall (guitar) is from Hull, and new drummer (and doesn’t appear on the album Max Rhead is from Newport.

Firstly Kira Mac is an unsigned band. This can be for a couple of reasons. Is it because labels won’t entertain anyone unless they have one million straws on Spotify, or is it because it is feasibly possible that an unsigned band can be profitable without the support of a label of any size. If one of my favourite bands (Dirty Honey) can do it, so can Kira Mac.

Right from the off you can tell that Kira Mac have been plying their trade for some time. I really have a soft spot for female vocalists - Leigh Matty, Pat Benatar, Ann Wilson, and the one I want to make particular reference to is one Dorothy Martin. 'One Way Ticket’ is Dorothy. I just wish everyone knew about Dorothy as they are bloody brilliant. So to compare Kira to Dorothy is very high praise indeed. Searing guitars? Check. Sumptuous chorus. Check. Instantly singable. Check. What a start! ‘Hit Me Again’ is in similar vein, and ‘Chaos Is Calling’ has a bone crunching riff that heavier bands whose band logos I can never read would crawl across broken glass for. It still has melody in spades.

‘Back For More’ (not that one) is a song that’s bluesier and still pushes the right buttons. You would swear that these guys are American. ‘Mississippi Swinging’ is without doubt joint best song on the album. With an opening line like ‘Mississippi swinging got a whiskey sipping honey on my left hand’ you know it's going to be a belter. It's a song whereby if you heard this in a pub, you’d stop drinking and start had banging. The other two highlights being ‘Hell Fire Holy Water’ and massive closer, ‘Dead Man Walking’. It's almost as if Kira Mac have a random song title generator. ‘HFHW’ will go gown a storm live as a singalong moment (I guarantee it), and ‘DMW’ is the song that started it for me. Its based on a massive chunky riff, Kira Macs vibrato vocal styling and tasty guitar solo. “Downfall’ ups the ‘heavy’ to 11 and ‘Never Going to Stay’ is the king to Downfalls yang. ‘Never…’ definitely has a Nashville country influence and is probably the most mainstream sounding song on the album

What Kira Mac have delivered is extraordinary. It is ten songs of pure quality, that after one listen will make you ride that rollercoaster and pay to take the ride again and again. Its not perfect, but it is 35 minutes of absolute enjoyment. I really think that Kira Mac deserve to be going places. The debut album is out at the ned of this week (18th November), and a UK tour follows hot on the heels, starting in Edinburgh two days later (20th November)

Imagine What Could’ve Been