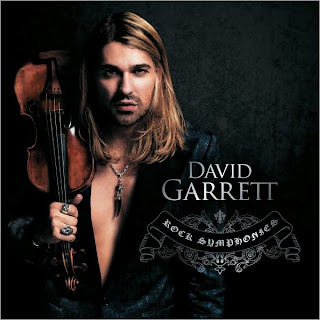 
Ever heard of David Garrett? Neither had I until this week. Unless you’re a daytime telly watcher (Daybreak or This Morning, or even the final of Dancing On Ice), I suspect he has housewives all over the UK trembling at the knees, and possibly other places I can’t mention here! I personally blame Amazon. I was looking for some cd’s, and then later that day I received an ‘Amazon Recommends...’ email. I checked the bloke up, looked cool enough, and then checked out the track listing and his own website. Not quite a one man Apocalyptica, or should that be Apocalyptic-i.
Unfortunately he’s been described as the David Beckham of the classical world. Seeing as he is a Guinness 2010 World Record Holder for the fastest playing of a violin, he is the Chris Impelliteri of all things violin. For those wanting to know, it was an amazing 13 notes a second.
Apart from gracing the covers of Vogue, appearing on Armani catwalks, a former GQ man of the year, the face of Audi, and an ambassador for Sony and Montblanc, he is one extremely talented bloke. He upped and left his German home aged 17 to learn at the renowned NY Julliard School of Music, ended up $25k in debt as his parents refused to support him. I bet they have warmed to him now.
Cover songs are one thing, but to do the same with a crossover album, that’s a complete new ball game. ‘Rock Symphonies’ brings together DG’s two main passions, classical and RAWK! Recorded with the City OF Prague Orchestra, ‘Rock Symphonies’ is a tribute to Garrett’s favourite bands and composers – Bach, Beethoven, Vivaldi, and some more modern masters in Page (Led Zep) , Cobain (Nirvana), Hetfield (Metallica) and McCartney.  But despite Garrett’s reservations about ‘crossover’ music, probably Classical to Rock is one of the easier ones to succeed. Let’s face it many a guitarist counts the likes of Bach, Beethoven etc as major influences. Quite a few Rock/Metal institutions have gone out on the road and succeeded with a full blown orchestra in tow  - Metallica, Scorpions, Rainbow, to name just three.  Go back 200 years and the likes of Hammett, Blackmore and Schenker would be Classical greats and their music cited as influences in the 21st Century.
Its great for Garrett and for the rock community is that he is plugging the likes of ‘Master of Puppets’ and ‘Smells Like Teen Spirit’ which would never ever be considered by a patron of his music otherwise. He has also cleverly picked songs which make the crossover effortlessly, but in saying that Rock Music is a natural successor to the classical genre. Kashmir, for example is just dying to be made into a classical piece
It’s one thing to play fast, but another to play with technique and feeling. Thankfully Garrett is not just eyeliner and highlights. He is on extremely talented dude, and then some. Where Apolalyptica was once purely cellos, Garrett sets his stall out immediately on Nirvana’s ‘Smells Like Teen Spirit’ with backing from the City of Prague Orchestra, talented guitarists Marcus Wolf and Franck Van Der Heijden (also Garretts Conductor), drummer Jeff Lipstein, and bassist Jeff Allen. Along for the ride on ‘Walk This Way’ is the über- talented Aussie Orianthi (who deserves to be huge in her own right), and sheds like only she can, and is great interplay between the two virtuosos.  Intertwined with the rock covers are some beefed up classical pieces – ‘The 5th’ currently used on a Cadbury’s Fingers ad, and is a piece that I would expect the likes of Within Temptation to pomp up. Garret plays a nice twist on ‘Vivaldi vs. Vertigo’. Although I’m not U2’s biggest fan (or a fan of them at all come to think of it) both tunes fit well with each other confirming yet again the classical / rock balance is one and the same.
And on it goes. It is consistently good from start to end, even if he does finish with Quo’s ‘Rockin All Over The World’.
As an added bonus the album comes with a live concert from his home country with an orchestra of many, and an audience of thousands. You then see just how good Garrett really is. Right from the off, from the first piece of Kashmir, where he casually walks through the crowd to the stage, he holds every member of the audience in the palm of his hand – you can see that Garrett really is a special talent indeed.
Some metal fans may think it’s a bit twee, but let’s face it Garrett won’t mind one little bit, if it means bringing home the bacon in huge amounts, and gaining worldwide recognition along the way. He is bringing rock and metal to an otherwise unsuspecting audience and they are loving every minuet (see what I did there!) of it. That in itself is a great thing
Next time I want to see him paying homage to some home grown rock from the likes of the might Scorpions and Rammstein. Then I will be one happy bunny indeed
92/100
Posted by aorwxm at 19:27