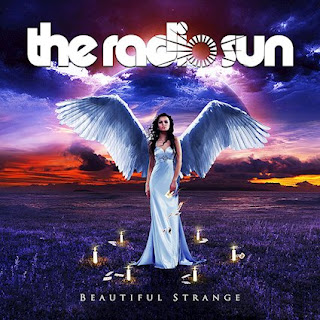 You have to give the lads of The Radio Sun a bit of credit. They have some serious work ethic. ‘Beautiful Strange’ is their 5th album in 5 yrs, 4 if you call it calendar years (think about it!).  Their fan-base has been growing with every passing release. I know this for absolute FACT. Their star has ascended these past three years appearing at HRH AOR, and ripping up with each and every appearance.

This isn’t being too critical, but I don’t think you will ever see an ‘Operation Mindcrime’ type album from TRS, or that time when Megadeth went a bit soft and did a proper melodic rock album. It’s just not in The Radio Suns make up to go all left field completely. They have a sound that is distinct, thank to Jason Olds pipes, and play to their power/pop-rock sensibilities. If you want change, then this is where Black Majesty, and Starchase come in. Despite that, I hark for a change.

For me, The Radio Sun is all about Summer rock, which in Australia is a bit more prolonged than Blighty (maybe not this year). And it’s the summer feel that you get from TRS at any time of year. This is mainly down to the fact that all they guys wade in with some sumptuous harmonies.

We join The Radio Sun on Sunset Strip in ’84 with their Hair Metal riffage and pulsating beat for ‘Hold On Tight’. Its at the heavier end of what TRS do, akin to the likes of Dokken or Ratt, and it’s the side I like of TRS the most. More metal riffs Janevski! Please? 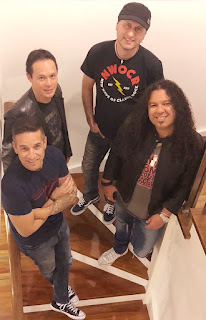 ‘Believe In Me’ is typical fare for these guys, the type of song they easily compose in their sleep. It’s all about the chorus and melody and its what they do ever so well. ‘Should Have Listened In My Sleep’ is definitely one of the highlights and demands repeat listens. Its positive vibe powers along, so dig out those hairbrushes (if you have any hair) and get stuck into some air vocals. ‘As Long As You Want Me’ should be one of the first and obvious choices for radio play. ‘Miss Wonderful’ is one of those songs where you just fall back and melt into the sound and the solo in particular. ‘Have You Got What It Takes’ is what I’m saying! I want this heavier and more of this edgier sound. Keep the melodies, ramp up the riffs. ‘I Don’t Want To See You Cry’ again typifies The Radio Sun, its upbeat, punchy enough and with a touch of pop. That said, I don’t think its possible to make Jason Old sound like there’s anger in his vocals! They work with the tools they have and produce results. ‘Hearts On Fire’ and ‘Five Years After’ are both melodic as hell. Title track ‘Beautiful Secret’ is a definite for the live set as the chorus is great. The riff is bugging me as it reminds me of a classic, but that’s what 51 does for you. It will come to me in about 3-4 months I’m sure. ‘Standing Tall United’ finishes with a quick shuffle of the feet and a quick one-two, with Janevski showing his chops.

I’m a fan of The Radio Sun, and I like what they do. As a live band they are even more fantastic and I’ve watched them grow into the band they are today. My gripe? Play me a song in five years and I may struggle to tell you what album its off. Its not a bad thing, but I would love to see just one album where TRS go for the kill, like a ‘Back For The Attack’, ‘To Hell With The Devil’, or ‘Invasion Of Your Privacy’. TRS have one of these in them, I’m certain of it. In the UK I would say that ‘Beautiful Strange’ (or any other TRS album) is a Ronseal album, i.e. it does what it says on the tin. BUT…just once, I want to be grabbed by the scruff of the neck, like the ‘Hold On Tight’ and ‘Have You Got What It Takes’, but at a more sustained level. Well done fellas.

Tracklisting –
Hold On Tight
Believe In Me
Should Have Listened To My Heart
As Long As You Want Me
Out Of This World
Miss Wonderful
Have You Got What It Takes
I Don’t Want To See You Cry
Hearts On Fire
Beautiful Secret
Five Years After
Standing Tall United
Posted by aorwxm at 22:42