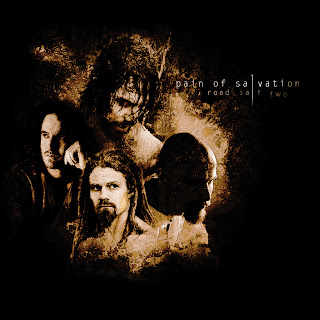 Sweden’s Pain Of Salvation are likely the very opposite of a predictable and standardized act. In Daniel Gildenlöw, Pain Of Salvation has a man who, to me, deserves to be mentioned in the same breath as Portnoy / Wilson and Akerfeldt, such is his influence on his band and rock music in general. One thing is certain; Gildenlöw is becoming an expert in expecting the unexpected. If you think he will produce an album in a certain style – forget it. This attitude is what will make Pain Of Salvation recognized. A cult band already, their music deserves to be heard by many more
They once more prove their unmatched reputation as true artists and modern rock expressionists by delivering ‘Road Salt Two’, the twin-companion ‘Road Salt One’. Meticulously anticipated, the sophomore part of the “Road Salt” double-album concept is now ready to make its overdue public appearance, after what can easily be called a very eventful last year for POS: Record company in financial difficulty, several chart entries with “Road Salt One”, Russian train bombs, a successful appearance at the mainstream-oriented Swedish “Melodifestivalen” song-contest (Sweden’s entry comp for getting into Eurovision!), the release and ban of a highly controversial video clip for the song ‘Where It Hurts’. 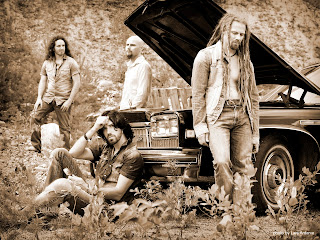 ‘Road Salt Two’ once again presents POS at its most emotionally intense and stylistically colourful, with a predominant 70’s almost classic rock vibe, yet, in direct comparison to “Road Salt One”, it might strike the listener as being a bit darker (hence the code name – Ebony – I suspect). It basically serves as a perfect breed between ‘old’ and ‘new’ Pain Of Salvation, while also presenting a different and previously unheard Pain Of Salvation.
Put it this way, if you are expecting the style of albums like ‘The Perfect Element’ and ‘Scarsick’ then you’ll be left wanting. Gildenlöw has opted for a darker, moodier piece than RS1 or anything previous come to think of it. But RS2 fits perfectly with its predecessor
To the album. First track ‘Road Salt Theme’ which by the way doesn’t appear on RS1, is a short stringed piece which seeps into ‘Softly She Cries’ which you notice right from the off is more of a departure to a time of the rock giants of the 70s complete with Gildenlöw s soaring vox, and the trademarked harmonies that only come from POS. The Road Salt Theme again appears within the song in the latter half. This time the guitar is pushed to the forefront with an overdrive effect, and make for a more doom laden piece. ‘Conditioned’ is a more riff and groove driven piece which sounds like Lenny Kravitz. The acoustically driven ‘Healing Now with its mandolin make me think of Zeppelin’s ‘Battle of Evermore’. ‘To The Shoreline’ is probably the closest that Pain of Salvation get to ‘classic’ Prog rock, and its haunting composition and instantly catchy chorus makes for being a contender for best track on the album. 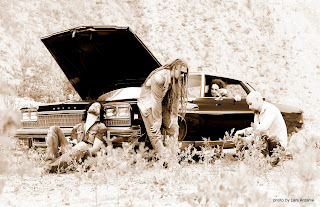 ‘Eleven’ contains a really pulsating bass line, and the instrumental middle section is both intriguing and captivating. Pair this with Gildenlöw’s gruff vocals and the end result is stunning. A definite live song to look forward to. ‘1979’ is again a nostalgia driven piece which is short, but very, very sweet. ‘The Deeper Cut’ is where Gildenlow’s vocals really shine, the song building its intensity before dropping away suddenly. If ‘Mortar Grind’ sounds familiar, it first appeared on the 2009 Linoleum EP. ‘Through the Distance’ gives another little break with its fragile sound, before the coming storm in ‘The Physics of Gridlock’, the longest and best track on RS2, and sums up the 2011 Pain of Salvation perfectly – heavy, slightly psychedelic, progressive and even theatrical (due to the French monologue) proving that Gildenlöw takes his fans on a weird and wonderful (never to be repeated twice) journey. Finally the ‘End Credits’ kick in to give the listener a breather!
It’s not necessarily a grabber and may require a few listens to fully grasp what Pain of Salvation is up to. Like the recent Opeth release, it gives more than a passing nod to the music of the 70s with a modern twist. 'Road Salt Two' is a perfect complement to 'Road Salt One' and closes this chapter of POS…or does it? Daniel Gildenlöw will not conform to the fans expectations and is more than happy taking the listener out of their comfort zone for the sake of his musical beliefs, and rightly so.
I beg you to catch them on tour with Opeth in the UK in November.
90/100 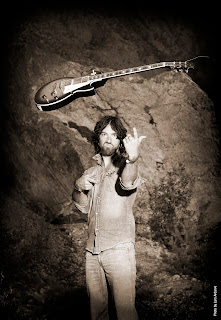