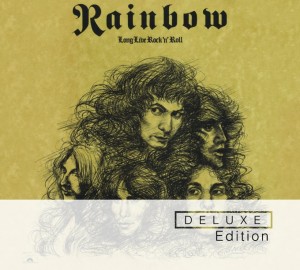 I don’t know if I’ve stated this before (probably!), but I’m a huge, nay massive, Rainbow fan. None more so than the Blackmore/Dio pairing. Especially the period where they could do no wrong (Rising & LLRNR). For me, the Blackmore-Dio writing partnership was, and still is the best in the business ('Tarot Woman', 'Stargazer', 'Kill The King', 'LLRNR', 'Gates of Babylon etc).Forget Lennon & McCartney, Iommi & Butler, Plant & Page, this was a (brief) partnership that delivered unparalleled quality, and should have had the chance to develop further if it wasn’t for Blackmore’s desire to polish things up a little and disband this quality team. My only real criticism of Ritchie was this loss, and ultimately Sabbaths gain.

I’m also a big, big fan of this ‘Deluxe’ CD format. There’s been the Dio / Sabbath / Lizzy / Rainbow reissues which truly deserve a listen, as some of the extras are truly superb for the discerning rock/metal fan. The layout is superb, with liner notes to die for.

Keeping up this tradition is the newly released Long Live Rock ‘n’ Roll. Dare I say it, but 'LLRNR' has a better flow than Rising, and the quality of songs still hold strong today, some 34 years after its original release. You get a rather nice gatefold sleeve, complete with liner notes, and lyrics which the album never had.

The jewel for me is the bonus disc, choc full of Rainbow rough mixes, a couple of songs from the (then new) band’s rehearsal’s at Shepperton Studios, including a jam-tastic version of 'LLRNR', and a clutch of songs from a US appearance on Don Kirshner’s Rock Concert. The latter is the last recorded vocals of Dio on a Rainbow recording, as two months later, Ronnie had also departed, leaving Blackmore and Powell as sole custodians

With the rough mixes the changes are subtle except for the barnstorming ‘The Shed (Subtle)’ much heavier than the original, and I must admit, a contender as being better than the original! It is minus the Blackmore intro, but kicks off in full force going straight for the goolies, with a bass driven section (this probably being the main reason it was dropped). The main other, being one of my all time fave Dio songs, 'Rainbow Eyes', is quite similar, but with a different phrasing. It’s minus the string section, and it’s a slightly haunting piece with Carey's keyboards simmering in the background along with Blackmore.  It’s truly a pleasure to hear these alternate versions of long loved classics. 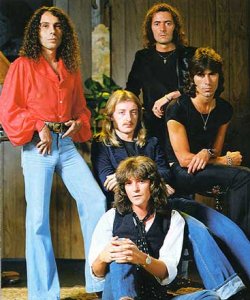 The rehearsal pieces again are wonderful. Showing Rainbow at their most creative, a 7 minute rearranged version of LLRNR (Take 1), more typical of Rainbow's live performances, and RJD improvising as only he did, inter-playing with guitar and keys. 'Kill The King' has Daisley's playing right at fore front.

The Don Kirshner Rock Concert is Ritchie's stab at the US market. Utilising the studio backing tracks, Dio sung new vocal lines over the top, and his performance is just....Ronnie!!

I won’t really comment on the original other to say it’s one of Rock's finest from the 70s or any other era. Blackmore/Dio/Powell were on fire and the 8 songs they laid down continue to inspire and please bands and fans 35 years down the line

However, it was all soon to change to a more radio FM chasing Rainbow, but this is a mighty fine testament to one of Rock's finest bands, and one that Blackmore would never ever get near to again. I know it's what he wanted, but this is by far the greatest era in Rainbow and Blackmore's history. Ignore all previous releases (except your beloved vinyl) and embrace the wonder that is 'Long Live Rock 'n' Roll'.

This will on rotation for quite some time, and is probably my favourite of all the aforementioned Deluxe edition releases so far. Thank you Universal for (yet another) magnificent album