A decent sized audience turns up again for the latest FM show/tour. If most of them are like me, they are there to witness one of Britain's finest EVER rock bands. I don’t say this lightly, but more of these perennial and on fire rockers in a mo!

I thought that the gig was a sell out and that FMs demographic had changed as there was a queue of a few hundred foppy haired teens (mostly young girls), there to see XFactor failure Frankie Co-codamol! Or so my lad tells me!

Also on the FM bill are younger statesmen of melodic rock, and all round Def Leppard sound-alikes, the hugely talented Vega, and the 80s prog faves, It Bites. 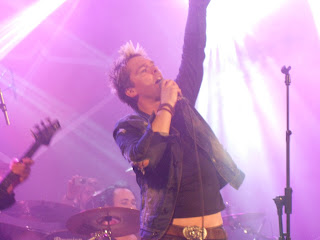 Vega (up first) both look and sound the part of the future of British AOR and they are ready to take on the Americans (hopefully) at their own game. These guyse don’t have an axe to grind with the dreaded 2nd album syndrome as new trace being aired tonight prove that they have developed and matured into a mighty fine ‘single’ machine. Highlights of the short set are predominately the ‘new’ ones, with ‘Not There For You’, a sure fire single in the not too distant future, the Def Lep influenced ‘What The Hell’ a song with a biographical tone and more than a ringer for Leppard’s “..Sugar’, and the anthemic closer, 'Hands In The Air’. The Martin boys certainly have a ear for a catchy number or 14, and in adding Night By Night guitarist Ben Christo, filled out the Vega sound perfectly, and when all the lads can sing, it doesn’t make for a better experience than this 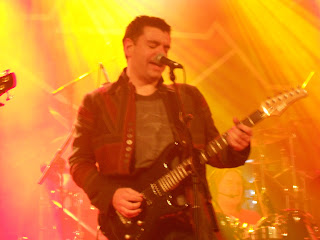 It Bites are a bit different from the original line up with only John Beck and Bob Dalton hanging on in there from the 80s, with John Mitchell (Arena, Frost*) handling vocals and guitar. ‘Master King’ John Beck is the definite conductor of the band with all taking lead and direction from him. If ever a band were there to please the audience, and more importantly themselves, its It Bites. Not giving a rats arse to a smallish set, they still throw in a typical prog number in 'The Wind That Shakes The Barley’ a cool Spock's Beard type number. To be fair to they guys, they are not living on past glories as 4 songs from the last 5 yrs  on offer all are very impressive. Again all members contribute to the backing vocals, with Beck looking as if he is slightly manic with a wild stare and grin on a couple of occasions, and looking a typical prog rocker and like a member of ‘Strange Fruit’ (go look it up if you don’t know what I mean - I state this as a tribute, not an insult!)

Onto the darlings of the night, Britains finest rock band, the mighty FM. Don’t take my work for it, they call it themselves as a part of the intro, and who am I to argue with such talent. FM have a lead singer in Steve Overland who should be talked about in the same sentences for 80s rockers and MILFY housewives as Michael Bolton, only Steve has a much better looking barnet! He sounds a mix of Paul Rodgers/Sam Cook and the aforementioned Bolton, all rolled into one great live package (no auto-tune needed here folks). Couple this with long standing partners and FMs driving rhythm machine (Messers Jupp and Goldsworthy) and it’s a case of light the blue touch paper and stand well back 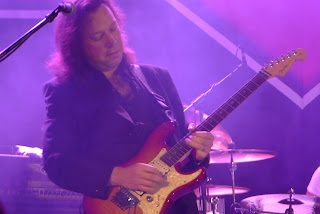 Jem Davis is not as ‘in front’ as 'Didge’ used to be, and that’s a good sign, just letting his playing and bvs taking centre stage. And with young gungslinger Jim Kirkpartick, his playing has injected a certain oomph into them, and lets face it, if you’ve seen FM these past 2 yrs, then you’ve caught them in the best form of their lives. ‘Tough Love’ kickstarts proceedings, before a clutch of oldies come to the fore, with ‘I Belong..’, ‘That Girl’, and ‘Hot Wired’ all hitting the mark. SO commented that he gets stick for his set list choices from the fans, but FM could remove 10 of the songs played tonight (and for the remaining two nights of the tour) and I think the everyone would still be very happy bunnies, such is the quality of their back catalogue. FM still can write a damn infectious song or two, Only Foolin, and the excellent Rockville track Crosstown Train bearing testament to their talent.
There was no surprise as per Mondays Bingley gig where Didge joined them on stage, we just had to do with the straight-talkin, let the songs and performance do the business from UKs finest

Lets just hope 2014 brings the 25th anniversary tour of the classic ‘Tough It Out’ and I would be one ecstatic FM fan indeed. Long may they (all) continue
Posted by aorwxm at 19:20