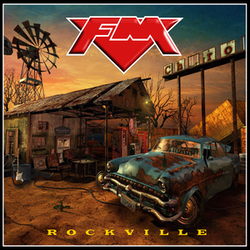 Well rock fans, Britain’s finest have been up to it yet again, and, like a fine wine, the FM guys are getting better with age. When most are content with living on past glories, FM are out to write a new chapter for themselves with every single release.

They gained a fair bit of moolah from their Pledge campaign, showing just how popular they are

They tried and tried for many a year to crack the big time, and what with Metropolis and now Rockville they have an album that just screams for it to be heard on the radio! It’s probably not as heavy as Metropolis, but bugger me they haven’t half come up with an instantly likeable, hummable and Goddamn infectious set of songs. The lads are probably in their most prolific period since they formed back in the 80’s . Load the album into the dreaded iTunes, and they genre displays ‘pop’! If anything it’s a FM-rock radio friendly (with more than a hint of country rock thrown in for good measure) set of songs that deserve to be played on this and the other side of the Atlantic. Listen up America!

FM have tried over the years to take on the Americans at their own game. That plan didn’t work out too well, but US’ loss is the UKs gain. FM have a talent for polished, and attractive songs.

Opener “Tough Love” (mid-paced and catchy!)and “Wake Up World” (soulful, and a shoe in for the upcoming live gigs) both typify the 21st Century FM..less heavier, still hankering for the 80s a little, but with a bit more soul (in both senses of the word). No more so than ”Only Foolin’’ the first single that typifies the FM/Kirkpatrick groove. “Crave” has ‘The Voice’ showing off his chops, and its got Radio 2 written all over the thing! Yes R2 sounds shite to some young whippersnappers, but for me this is the big time!!

Mr O goes all kinky on us by singing about “My Love Beads!” Tinnitus is a horrible thing to contend with, I’m assured its “My Love Bleeds”. Highlight of Rockville is the new classic, “Crosstown Train”, a brooding number where JK truly lets rip. A heavier beast than the rest, its up there with their finest and if I can recommend buying an album based on one song alone, then “Crosstown Train” is it! Ill give you two reasons...the other being "Only Foolin'" another catchy Overland classic of the present and future.

All the others roll along in a similar FM-vein WYSIWYG, powerful, catchy as Hell, and delivered with a muster that few bands can match nowadays.

So, moving onto Rockville II.....
FM have been in prolific writing form of late. In an age where fans like to have a number of formats, special editions etc, the FM fan-base will be in their element with Rockville II. ‘High’ is another FM slant on the SO back catalogue, with “High’ getting the treatment this time round. (I know The Ladder, not FM covered “Baby Blue” before any smart arse kicks off!). “Bad Addiction” is a mix of ‘Aint Gonna Run’ and ‘Primitive Love’ and should have been a contender for the main event.
Folk music often concerns being far away from where the singer resides. Steve Overland must have very itchy feet and a desire for travel in its various forms with songs like ‘Crosstown Train; Desolation Station; Runaway Train and Paradise Highway’, and continuing on the travel theme with ‘Brother Take Me Home’!! If you could put two genres together it could be country rock, but the amalgamation isnt too good...."Crock!" or even "Cock"

So there you have it – a mighty fine main event and a solid set of songs on Rockville II that any discerning FM fan will lap up. Whilst it doesn’t break any musical barriers, FM are in very fine form indeed.