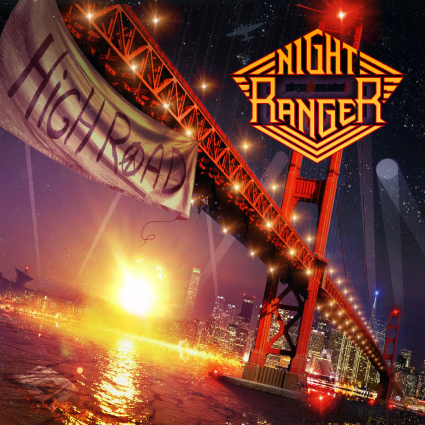 Of the new album, front man/bassist/songwriter Jack Blades commented, “It’s almost summer and a great time to take a trip down the High Road’!  Our new record features classic Night Ranger feel-good, high-energy kick-ass rock n’ roll.  We can’t wait for our fans to hear.”  Drummer/singer Kelly Keagy added, “We’re so proud of this new record and excited to get back on the road to bring the new music to our fans.” The strength of the songwriting is the key here, and if you’re an existing fan, then you cannot fail to be disappointed and every track has Night Ranger thru the middle like a stick of rock!!

‘High Road’ is instantly memorable, form the opening keyboard bars to the punchy chorus and follows on from where ‘Growing Up In California’ left off, only this is MUCH better. I can picture an 80s video with the gang in a mustang convertible going down the 101, even if the real video doesn’t show this, this is what the song is evoking in my mind, its an instant classic

‘Knock Knock Never Stop’ has both Blades and Keagy sharing vocal duties, and it has them proclaiming ‘Rock And Roll To The End,’ and is more of a statement than a song, as I expect these guys to be doing exactly that. ‘Rollin On’ is pretty heavy by Night Ranger standards these days, and harks back to the earlier stuff – stuff being ‘Seven’

'Don’t Live Here Anymore' gives the first solo opportunity for Kelly Keagy to flex his pipes, and he is a good a singer as he was 30-odd years ago. It’s a cowboy song of exquisite quality, brought up to this standard with Gillis’ and Hoekstra’s blinding guitar work. Gillis has to be one of the most underrated guitarists in rock

I’m Coming Home is another road song and again features the dual vocal attack. ‘X Generation’ sees Hoekstra and Gillis trading licks, and coupled with Keagy’s rasping vocals it’s a blend of classic sounding Night Ranger with a 21st century kick. Night Ranger wouldn’t be Night Ranger if it weren’t for ballads, and ‘High Road’ has two of them in ‘Only For You Only’ and ‘Brothers’ falling almost into country then rock. Country is good I tell ya! ‘St. Bartholomew’s’ is another kiss ass rock track and they throw the kitchen sink at it. ‘LA No Name’ sees us out. An acoustic instrumental and is a subtle end.

It’s fair to say that Night Ranger have pulled out the stops for ‘High Road’. It is definitely a summer feel good album if ever I heard one and probably their finest in about 30 years, and stands up well alongside the established classics that Night Ranger have offered. Who says there’s no life-blood in modern melodic rock? These wily old dogs can still show the new breed a thing or two with some quality radio friendly rock n roll. This will surely sit at the top of people’s melodic rock gems of 2014.