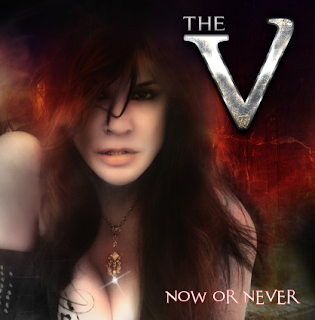 Veronica Freeman the front woman of Benedictum and Dio wannabe moves out of her comfort zone to do a solo album for the Frontiers label. To say Frontiers have thrown the kitchen sink at this is an understatement. Either that, or Ms. Freeman has a blackmail (little black) book of decent proportions (see and I didn’t mention her boobies at all!). She has gathered a rather impressive array of talent from the rock-pool! Band mates Pete Wells, Aric Avina and Rikard Stjernquist (Benedictum), Michael Sweet (Stryper), Garry Bordonaro (The Rods), Jeff Pilson (Dokken, Foreigner, T&N), Mike Lepond (Symphony X), Tony Martin (Sabbath), Jerry Dixon (Warrant) and many, many more!

Her music with Benedictum started out as a novelty for me as they did excellent Dio covers. Now Or Never is a decent departure from the more metal vocals of Benedictum and proves that Freeman has a decent singing voice on her when not forcing the issue. The album kicks off with a few above average songs, with opener ‘Again’ showing the talents of Freeman and Michael Sweet, advertising the modern, harder edge of Sweets talents on guitar and production. ‘Roller Coaster’ jumps out of the blocks like a classic Kiss song, think Strutter or Deuce. ‘L.O.V.E.’ and ‘Ready To Run’ have their musical roots firmly planted in the 80s. There are a couple of duets worth a mention here. Firstly ‘Kiss My Lips’ with Leather Leone of Chastain (with both sounding very similar in style) and showing that the vocal similarity blends well. The second duet ‘King For A Day’ with Tony Martin shows he has lost none of his power and is as good as his Sabbath days.

All in all ‘Now or Never’; proves to be a decent album, and one I suspect that will top the Frontiers sales come the end of the year such is the pull across the metal fraternity for Ms. Freeman. It’s not far removed from her Benedictum stuff, but she is given more chance to shine. I’m expecting greater things should no2 be on the cards.

Produced by John Herrera
except for:
King for a Day (produced by Kenny Lewis)
Love Should be to Blame & Again (produced by Michael Sweet)