Screaming Eagles - 'Stand Up And Be Counted' Album Review 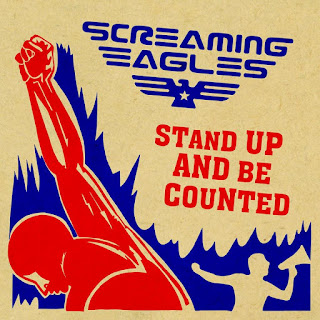 I must admit, it took me a while to get my mitts of the Screaming Eagles debut. Not so sure why it took me so long, but it immediately became like seeing a long lost friend. Everything felt familiar and comfortable, in a great way of course.

The Northern Irish foursome recently achieved international recognition from Sony Music Pictures in Los Angeles, who after signing a licensing agreement with the band, featured their first single release “Rock N’ Roll Soul” on the Hit US TV Show - Justified, Season 6 Episode 1, starring Timothy Olyphant and airing to an audience of more than 4 million viewers in the US.
Screaming Eagles have shared bills with the likes of Airbourne, UFO, Black Star Riders and The Answer, at various festivals such as Giants Of Rock, The Great British Rock N Blues Festival, Hard Rock Hell and their biker edition in Ibiza.

To kick-start the next chapter of the Screaming Eagles, the band will be releasing a multi track EP, titled ‘Save Me’ with bonus material including a cover of Australian rock classic “Good Times” featuring guest vocals from Pontus Snibb of Bonafide as well as some live material recorded at Hard Rock Hell, 2 years ago.
The 7 track ‘Save Me’ EP will be released digitally and worldwide on 24th June; with an exclusive new video shot in their home country to back it up.

The new album ‘Stand Up and Be Counted’ contains ten tracks of blistering rock n roll, recorded in the band's home country, Northern Ireland during March/April 2015. 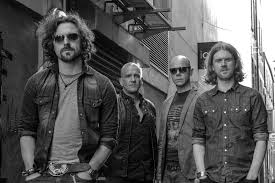 All the Screaming Eagles hallmarks are there from the off – DC/Airbourne style classic rock with a Punch! There’s no need to be able to be a Malmsteen and play 150 notes a second when you can be as effective and hard hitting as this. Ready For The Fall is as close to Airbourne as you will ever get. Its not a bad thing by any means – its in yer face, right to the point high voltage rock n roll done extremely well. If Bon Scott had a baby with Joel O’Keefe then Chris Fry would be the said adopted offspring. Strike that – if AC/DC gangbanged Airbourne then Screaming Eagles would be the bastard offspring of such a dalliance. ‘Save Me’ takes off on very similar note. An air raid siren gives the game away to what is approaching, riffs of seismic proportions coupled with fire and brimstone. ‘Stand Up And Be Counter has all the air guitar knobs set to 11 for those of you wanting to join in at home (why can’t bands give away free air guitars and wigs with cds?). ‘Bow Down To The Blues does what it says on the tin, old skool blues-rock with a modern edge. ‘Chase You Down sees the SE’s throwing in a bit of funk. ’Breaking All The Rules’ makes for a refreshing refrain. Part country rock, then exploding into this delightful meaty riff.

A few bands are looking to step into AC/DC’s soon vacant shoes. Few are doing it as good as Screaming Eagles. Chris Fry’s (or shout that be fries) voice shines like a beacon in the darkest of nights.

If you love the debut then this is a no brainer of gargantuan proportions. It’s a step up from ‘From The Flames’. Screaming Eagles deserve greater things and 'SUABC' will get them their deserved rewards. Give this a while and they will be on the long road to rock stardom.