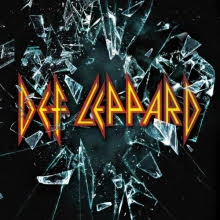 Def Leppard (album title) is their first album in seven years since the much praised ‘Songs From The Sparkle Lounge’. Seven! In most peoples/ bands timescales, seven years is an eternity. Some bands have formed, disbanded and reformed in seven years. For the Leps though it’s a (Yorkshire) Tea break.

Apparently the band got together with the idea of putting a three track EP out. Before you could say ‘Up The Blades!’ twelve songs had been written. It’s the first time ever that the lads have not had the backing of a record deal in place and because of the freedom in doing something for themselves (and the fans of course) the early word on the streets is that it is a return to form. It’s on release via earMUSIC

The early word on the streets is spot on. Def Leppard is probably their finest release since those heady days of the 80s. Lets face it Leppard don’t need to release a new album. They certainly don’t need the money. It’s a huge testament to them that they wanted to release an album, because anyone that goes to see them in the 21st Century probably isn’t interested on hearing anything after Hysteria. They are sitting on a back catalogue of songs that are massive anthems. I get a sneaky feeling that one or two at least are good enough to break into this ‘classic’ set list they have generated for themselves over their (almost) 40 years together.

There’s a couple of songs on there that could have done with being cut from the album, but there’s a nucleus of songs at the early end of the album that sound as if they belonged to the Pyromania era. In particular, the gorgeous ‘Dangerous’, the funky ‘Man Enough’, and the guitar laden ‘Sea Of Love’ with its Lynyrd-esque backing vocals. Opener ‘Lets Go’ has the hallmarks of ‘Pour Some Sugar on Me’ flowing through the riff. On the ballad ‘We Belong’ is a cool track as all five get a shot at lead vocals. It’s uncanny as to how close they all sound, which is why the harmonies are always so bloody good! ‘All Time High’ adds some welly back into proceedings; It’s a high energy full on rocker, choc full of Leppard’s layered vocals (pat.pending). ‘Battle Of My Own’ is an interesting mix of Led Zep, Coverdale Page and Chris Cornell’s ‘Seasons’.

Why this hasn’t happened with earlier albums is a mystery. Finally Def Leppard have played firmly to their strengths  -huge harmonies, and even bigger riffs.

The ‘older guard’ of rock music has certainly played their part in the music of 2015. Thunder have given us one of their finest ever albums, Bands such as FM Romeos Daughter and Europe have all made considerable valuable contributions – all of whom are proving that rock certainly aint dead.

Def Leppard have produced an album that few in 2015 would have thought was possible.  Its got Def Leppard running through it like a stick of rock, but is still modern and fresh in its approach

If this is to be their final album, then this is one decent way to go out. Def Leppard will certainly be lapped up by their existing fan base and deservedly so. The live gigs will/should be around for some time yet, in the meantime, get onto the retailer of your choice, sit back and enjoy the ride.